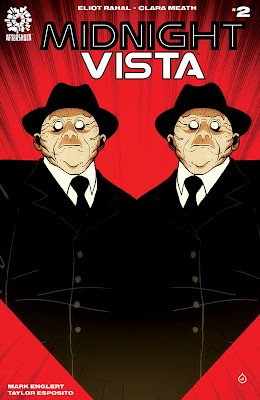 Midnight Vista #2 by Eliot Rahal and Clara Meath, published by Aftershock Comics
Oliver is a boy who was abducted by aliens along with his stepfather. Upon his mysterious return years later he somehow remembers everything.. but no one believes him. Doctors, detectives, even his own parents question the credibility of his recollections. In this second issue we hope to discover more into what had happened to him while he was missing for that decade, and who those mysterious characters were on the reveal of last month’s final page. Retelling inspired-by-actual-events stories often times scatter my interest faster than consecutive indoor mall kiosks, and truth be told, I had this book in queue based solely on the cover. Clara Meath does a fantastic job illustrating this story as told by Eliot Rahel. So far, the characters have sufficient life given them in her details and I look forward to seeing more alien spaceship operating table spreads. I particularly enjoyed last years Hot Lunch Special by Rahal and seeing how well he handled an epic noir in a five issue miniseries abbreviated format paired with  what I’ve seen so far in Meath’s illustrations give me all the motivation I needed to look forward to where this story will go. I’ll at least be around for the first arc; knowing that the truth is out there, I’m at least trusting this creative team to show me what it is. 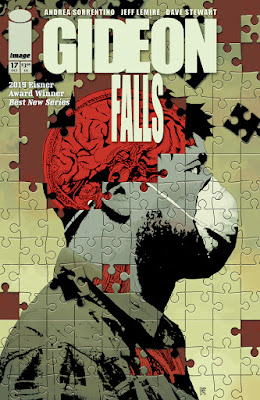 Father Fred, Angie, Norton, and Clara are back and I could not be more excited about a single comic. This story is up there as one of my all time favorites. The third volume, Stations of the Cross, just ended and also available this week while this next issue begins a new chapter. If the first volume built the barn, and the second brought you inside it, while the third turned it inside out, I honestly have no clue where they take us from here. Lemire is at the top of his game right now, and he is allowing Andrea to push boundaries nobody knew possible. There isn’t a piece about this story that I am tired of. The paneling, the storytelling, the dialogue, the texture, the stitching of its narrative, and the muted earth tones accented with rich hues of deep reds are everything that make this comic brilliant. Starting this now with issue 17 would nearly knock your mind senseless, so it goes without saying that picking up the first other volumes along with this issue would be the best choice. Although.. starting from the inside and working your way out might be what Lemire had planned for us the entire time. Read this story in real time before pop culture discovers it. Be one of us and circle ‘round. 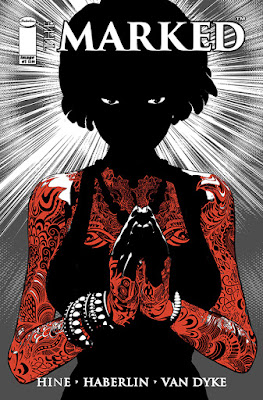 Premise for Marked felt similar to other recent titles such as Faithless and Scratched. Combine the self-indulgent nature of Faithless with the occult driven nature within the existence of body art of Scratched and you have a loose version of what seems to be what’s happening in this new title from Image. Unlike this comparison I’ve made that makes sense only in my mind Marked uses the magic obtained by tattoos for good rather than evil. I am highly interested in how this story gets told and to what level the coined “hybrid magic” is played out to be. I enjoy stories told involving threads of the supernatural and this reads as nothing short of it. I’m on board.

Gideon Falls #17 by Jeff Lemire, Andrea Sorrentino and Dave Stewart, published by Image Comics
Gideon Falls is a must-read comic whenever it comes out. Andrea Sorrentino is doing some of his best work ever, and his pairing with color artist Dave Stewart has been an absolute revelation (not that it's surprising that either is great, but it's been like the experience that the first person who ever combined peanut butter and chocolate must have had). I adore this weird, creepy book (my earlier review here), and think it's terrifically smart. trippy, religious horror-scifi. Things were left off in a pretty weird place, and I can't want to see where it picks up. The third volume is now available, so this is the perfect time for you to catch up on one of the best books out there. 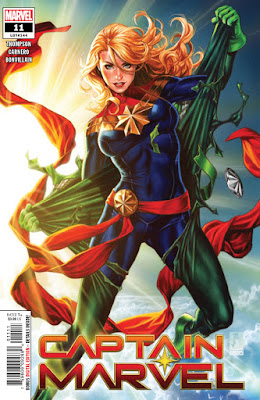 Captain Marvel #11 by Kelly Thompson and Carmen Carnero, published by Marvel Comics
This is quietly one of the very best books that Marvel is publishing. Thomson and Carnero have been telling a very smart, emotionally grounded story over the course of 10+ issues, and it all seems to be coming to a head. Carnero has been a real revelation, as I wasn't familiar with her work previously and she is absolutely fantastic. And Thompson is one of Marvel's MVPs right now - she's a gifted storyteller, and someone who just has a fantastic ear for what people really sound like. This is a wonderful book. 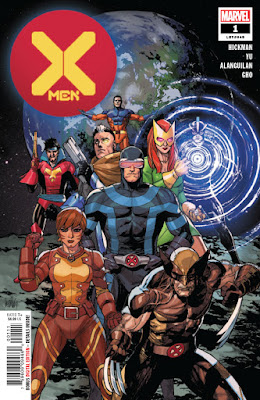 X-Men #1 by Jonathan Hickman and Leinil Yu, published by Marvel Comics
There's not really that much for me to say here.  I've LOVED House of X and Powers of X and more than just how much I've loved the books themselves, I've loved how this has reengaged some of my comics fandom and desire to have community with others. So you can say I'm excited for this one. Hickman himself is writing this book, with art from the wonderful Leinil Yu. This book looks like it's going to be big and exciting, and that's just what I want. 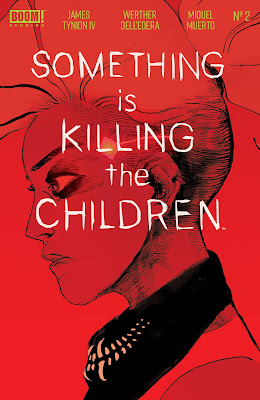 Something Is Killing The Children #2 by James Tynion IV, Werther Dell-Edera and Miquel Muerto, published by Boom! Studios
Issue 1 of Something Is Killing The Children instantly proved that it isn't an IT ripoff. Thankfully putting the know-it-alls of the comics world in their place. What you do have in SiKtC is a suspenseful, disturbing and almost shocking story that draws you right in. I love my horror comics as much as the next person, but seeing kids being ripped to pieces, isn't an easy read (I'm the father of two young kids). Tynion may be known to most with his DC work but for me, with my small pull list, this is my first dabble into his work and I'm truly amazed. Slightly disappointed to hear this has been moved into a larger ongoing series (I prefer 5 issue runs). But Tynion seems to be pointing at a grander story of monster hunters and I'll have me some of that. Werther Dell-Edera’s artwork and Miquel Muerto's colours are perfectly suited. Giving a rough, untidy look that stops the true horror of the story from looking to clean and polished. A very, very gloomy horror title and a must read for any horror fan. 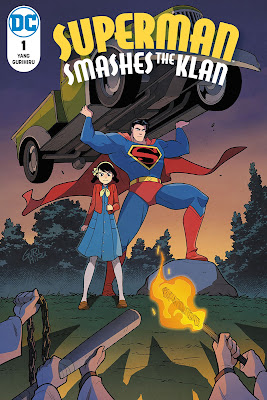 Superman Smashes the Klan #1 by Gene Luen Yang and Gurihiru, published by DC Comics
Based on a ‘40s radio serial, Superman Smashes the Klan is a story Yang has been itching to tell for a while now. Yang, perhaps best known for his original graphic novels like American Born Chinese, his work on Avatar: The Last Airbender adaptations, or his writing work for the young readers hit, Secret Coders, has been working for DC since the tail end of The New 52, writing the stories that ultimately killed off the New 52 incarnation of Superman and paved the way for Rebirth and Superman: Reborn. He had a great voice for the character even then, and I’m excited to see him take Superman back to his roots as a New Deal idealist, focused on the plight of the little guy, eradicating everyday injustice instead of stopping a major alien invasion. The fact that Yang targets the Klan, a group we most often thing of as attacking African-American, but who also famously railed against groups like Sicilians, Catholics, and Chinese, makes this book an important point of social commentary for both past and present. 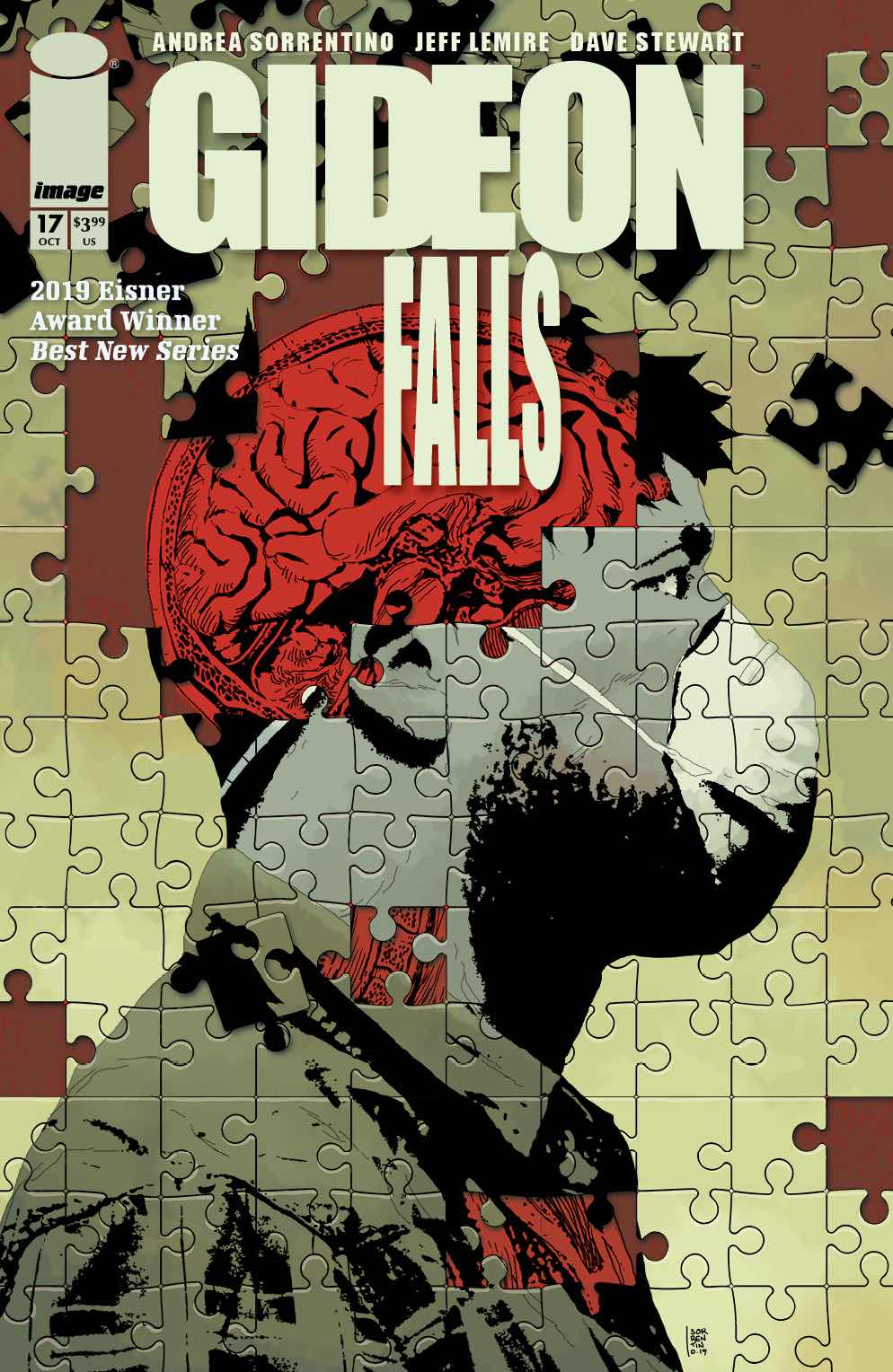 Gideon Falls #17 by Jeff Lemire, Andrea Sorrentino and Dave Stewart, published by Image Comics
WE NEED TO TALK ABOUT GIDEON FALLS. Actually- we need to talk about Jeff Lemire, a lot- but right now, let's focus. But first, please, allow me to tell a quick little story here for you all: my oldest brother was like...seventeen-ish when he first tried my grandmothers lasagna. A thing she only really made once or twice a year, with love and skill that only a grandmother could have. When he ate it for the first time, he had an instant realization that he had missed out on SEVENTEEN YEARS OF THIS DELICACY FOR NO REASON AT ALL. You may be asking yourself what the point of this story is- and I am here to shamefully admit, that Gideon Falls was the first Jeff Lemire story that I read. I get how bummed my brother must have been about missing out on that sweet, sweet lasagna, knowing that I have been missing out on these creations. Now don't be judge-y, I have since indulged heavily into Lemire's catalog, and as I believe one of my lovely colleagues here at Panel Patter quoted me on when discussing the recent release of Frogcatchers - the man can't miss. Gideon Falls- perhaps holds a spot near and dear in my heart, since it is what let me to a plethora of brilliant story telling, but more likely it is simply a captivating, and stunning tale. The off kilter paneling, fractured artwork, and this dark storyline of Gideon Falls make a perfect partnership, and let's be real- it's the perfect season for it's return. It is a mistake to sleep on this series, and it is back. This week. And you have the chance, right now to experience it, and get lost in its sinister art, feel the paranoia, and do your best to figure out what reality is actually reality. 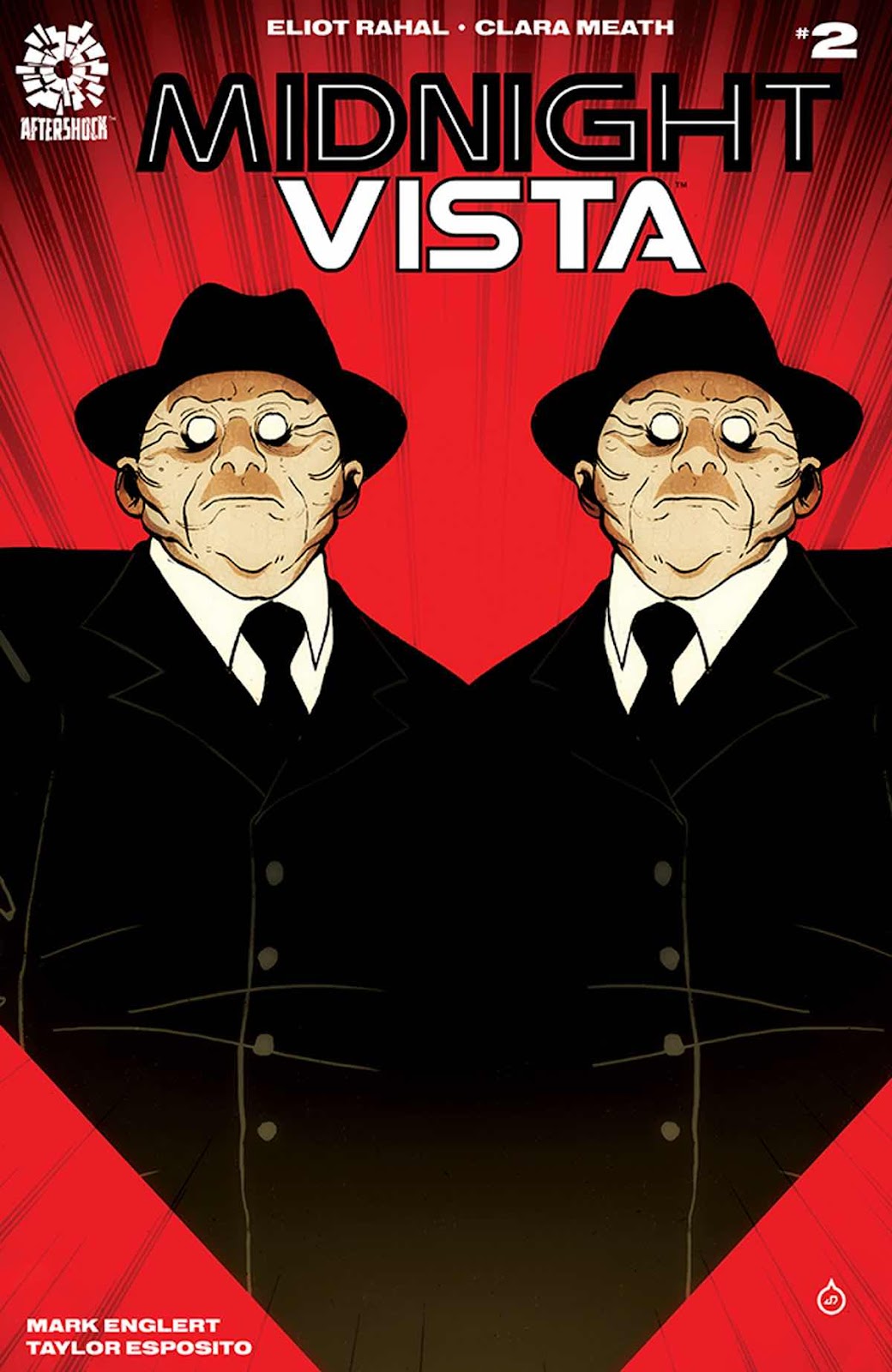 Midnight Vista #2 by Eliot Rahal and Clara Meath, published by Aftershock Comics
Midnight Vista, you make me want to believe. There is something about this story that fills me with a sense of nostalgia. Maybe it is the story of a close encounter, reminding me of the television and stories I obsessed over as a kid, or maybe it is subtle references tossed in to show the reader the year, maybe it is something else entirely, I quite literally could not tell you, but I am definitely here for it. There is an underlying lightness to Midnight Vista, that I was not expecting from the subject matter, largely in my opinion, thanks to the dialogue. The conversations and thought processes of the characters seem genuine, and I am waiting to see what other gems cross the lips of the characters featured on this issues cover, the definitely human F.B.I agents Michael Mann, and Mike Manning. Someone, anyone, everyone- pick this up, read it, and let yourself be taken in by the charm of this story.
Panel Patter at 10/16/2019 08:00:00 AM
Share
‹
›
Home
View web version