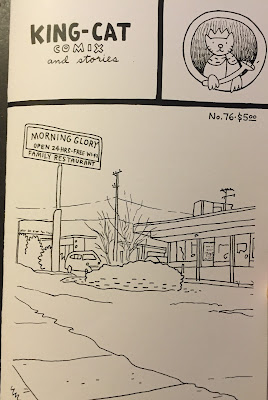 The best autobiographical comics are the ones that reveal the creators not through the events that the comic recalls but through the ways that the creator puts those events together on the page. John Porcellino’s comics look simple; at a first surface glance, there’s not a lot there in his drawings. But King-Cat Comix and Stories #76 demonstrates that as Porcellino has been doing his comics for over 20 years, the simplicity of his drawings creates an easy way into seeing the complexity of life as Porcellino experiences it. In his opening essay “Sinnissippi Days,” Porcellino calls his latest issue of King-Cat Comix “... a weird one.” And for as weird as it may be, Porcellino remains open and honest about his life, creating “weird” comics that tell us more about the cartoonist than any straightforward autobiography ever could. 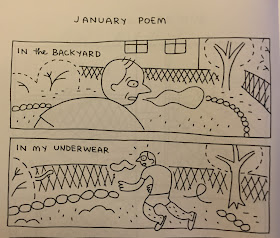 In many ways, Porcellino’s comics are traditional autobiography comics. He recounts dreams that he had, time spent waiting for a car to be repaired, memories of an old, freezing apartment and signs of the changing seasons. It’s all the stuff of so many cheesy and self-obsessed autobio comics. But instead of getting trapped in an endless cycle of recounting a days’ events, Porcellino’s comics in King-Cat Comix #76 offers insights into the everyday things that Porcellino think are important. He’s not chronicling what he had for lunch or retelling every encounter he’s had trying to raise his own importance in the everyday. In fact, his drawings and the immediate nature of it reduces his stories to a simple emotional level that really opens up his storytelling on a universal level.

It’s this universal experience portrayed through specific events that make Porcellino’s comics unique. The ways that he observes the moment when how a dream leads to a memory that’s a decade old or the emotions that seeing an old lady and a man stir up in him strike a chord that’s resonant as part of the human experience. But it’s also in the way that he observes nature that shows how Porcellino makes something specific into something broad and understandable. A one-page joke is a review of radishes (“weird and earthy”) but another one-page cartoon is a drawing of bird tracks in the snow. Both of these comics are the right amount of weird as he called out in the opening essay but also perfectly at home thanks to the observational characteristic of Porcellino’s stories. 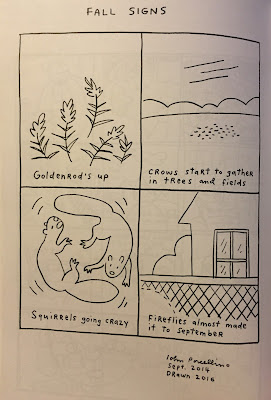 Adding to the general tone of the comic is the conversational nature of it, from Porcellino’s stories to a listicle of stuff he’s currently digging to the letter column that’s just letter writers stopping by to say “hi” and offer up some Porcellino-like observation from their own life. The friendly nature that Porcellino cultivates in this comic stretches out through all of the aspects of it. While there’s undoubtedly a lot of work that goes into making a comic like King-Cat Comix #76 (thanks to Porcellino notating when things happened and when he drew them, you can see that the origin of some of these comics go back a couple of years,) the lo-fi approach to storytelling and production makes it feel like Porcellino could have rattled these stories off the top of his head like any good and practiced raconteur.
Scott Cederlund at 8/10/2016 09:00:00 AM
Share
‹
›
Home
View web version