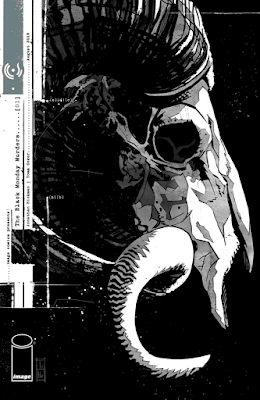 Jonathan Hickman is a master at the long game.  He's better at telling big, complex stories than pretty much anyone working in comics today.  So when he debuts a new series I'm excited to check it out, both because he's a great storyteller and also because if you don't start at the very beginning you might quickly get lost. Hickman's stories also have something of a thematic consistency.  While the subject matter may differ (the apocalypse, multiversal collapse, secret Cold War conspiracies, dark forces controlling the media, science gone wrong), he is clearly interested in certain themes, including (i) complex social settings and systems, (ii) the powerful and secret elite that are the hidden hands moving the chess pieces of society, (iii) the ultimate failure of that elite to focus on those goals and to maintain (or protect) society, and (iv) the inevitable descent into selfishness, fighting, and betrayal.

It's a really rich set of themes, and ones that he and illustrator Tomm Coker, colorist Michael Garland and letterer Rus Wooton (both Garland and Wooton are regular Hickman collaborators) begin to explore in the dense, compelling, well-designed debut of The Black Monday Murders. This is an oversized first issue that deftly does a lot of world building in a way that makes reading this comic not feel like work (which can sometimes be the case with dense stories).  It helps Hickman that he has such skilled visual storytelling partners. I wasn't familiar with Coker's work, but it's a revelation. 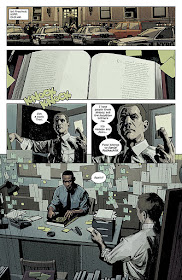 The story begins in October, 1929, with the day of the stock market crash, where the curtain is pulled back and we see the leadership of Caina investment bank monitoring the day's events. The story wastes no time revealing the hidden truth which is that magic is real and is the true currency of power that drives these titans of capitalism, and magic, money and power are inextricably linked. Ultimately, with money and magic, there are consequences that someone must pay, sometimes with their lives.  The story moves forward to the present, and interspersed throughout the issue are supplemental materials such as a glossary of certain terms, family trees and other information relevant to the story. The present day story is focused around the murder of the investment bank's (now known as Caina-Kankrin, thanks to a merger) chairman (who also held a set of power within the more secretive controls of the bank), with investigative duties being handled by Detective Theo Dumas, a police officer who appears to be working for the bank and a practitioner of magic. The murder is an ominous event, one that looks like it will have political, social and magical repercussions.

This is a great, ambitious start to a new series. Hickman and company don't waste any time in introducing a lot of story elements, as the story establishes that this is going to be a serious, detailed look at the real power behind high finance; i.e., magic. One of the things I appreciate about Hickman is that engages in comic book storytelling for grown-ups. He believes in giving the reader a lot of information, and expects that they can keep up. One of the ways he is doing this is by including supplemental information within the text of the story. I really like this storytelling technique as it is in effective way of delivering a lot of information without making any one character into an exposition machine. This sort of material has been used effectively as part of storytelling in books such as Lazarus and Zero in the last few years, And it seems like it is going to enrich the story here as well, as this material is presented as part of the story is it the reader is finding some sort of secret dossier.

This illustrates one of the other (many) things I enjoy about comics written (and sometimes illustrated) by Jonathan Hickman, is the very deliberate way in which they feel designed and structured in an almost architectural sense. Hickman has brought a lot of great design sense to comics including his use of lead-in pages, quotes (which help set a tone), white space (which adds a sense of pacing to the book), and terrific, additive info-graphics from time to time. That's also the case here, as the design (which includes excellent lettering from Rus Wooton such as a code that is there to be deciphered and makes its way organically through the story) gives the sense that this story is a very deliberately-structured found artifact. 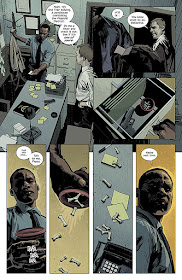 Thankfully for Hickman, he has an excellent set of artistic partners in illustrator Tomm Coker and colorist Michael Garland. His collaborators on his Image series are uniformly great artists (Nick Dragotta on East of West, Nick Pitarra on The Manhattan Projects, Ryan Bodenheim on Secret and The Dying and the Dead). As I mentioned, I wasn't at all familiar with Coker's work but he does great, grounded, dramatic work in this first issue. Backgrounds here feel completely real and lived-in; I'm not sure if Coker is using photo reference but if he is, it's helpful. The stock market floor, secret offices and apartments, and police precincts all look like these actual locations which helps to sell the (relatively) more realistic, grounded nature of the story.

Coker has a great line, and I'm already a huge fan of the way he creates his characters. The people depicted here feel completely realistic as far as facial expression and body type (none of the comic exaggeration of illustrators such as Dragotta or Pitarra is used here). Coker's character depiction reminds me of that of Leinil Yu (for the strong, muscular line that's conveyed in characters' faces and emotions), Tula Lotay (for the wry expressions and the striking beauty of several of the characters) and Michael Lark (for the painstaking, detailed work done in world building, along with the careful facial acting) but Coker's style feels very much like his own. His body language and facial acting all feel very precise and on point for the particular mood or reaction that needs to be conveyed.

What helps Coker sell this grounded world tremendously is the color work of Michael Garland. I'm a huge fan of the not-realistic, limited color palate that Garland does so well in Secret and The Dying and the Dead, but he's a versatile colorist and he's doing something very different here. The color choices here are pretty muted, as fits with the grounded, relatively real world setting. Garland makes a lot of effective use of light and shadow, which helps convey the ominous nature of the events of the story. He also does a little bit of pixellation and worn, scratchy effects in several panels, which reminds the reader that the whole issue is presented as a secret dossier and we are privy to knowledge about highly confidential events. It's great, specific work that really adds to the storytelling. 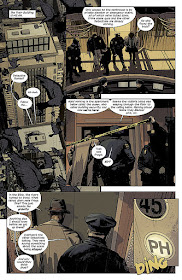 The magic in The Black Monday Murders is a fantastical element, but it's one that the story takes completely seriously. We see the magic used only in brief glimpses, almost shadows. It's hinted at and seems to be involved in predicting and reading the stock markets, but it seems to be a subtle magic (no lightning or ghosts or men that turn into giant wolves here). What's really clear is that, like Hickman's other great works, even more than magic, this is a story about greed and power and control. Magic is a currency in which the powerful trade. This feels like a peek behind the curtain at those who are in charge; it's meant to be eye opening in the sense that he's letting us regular folks know that we don't even know who's in charge, nor do we know how it is that they maintain that power. I think Hickman is most interested in the societal 30,000 foot view, and he's far less interested in the view of regular folks living in these worlds than he is in the folks who're making the decisions (unlike Brian K Vaughan, for example).

By way of example, his work on Fantastic Four centered around a secret interdimensonal counsel of Reed Richards from many universes; SHIELD focused on an Illuminati-like organization who has been defending us from alien invasion since the time of the ancient Egyptians (but who ultimately falls victim to infighting); East of West gives us the heads of a number of nations who are secretly all members of an apocalyptic religious cult that drives their motivations even more than allegiance to their nations; The Nightly News shows us the secret cabal that's manipulating the media and, by extension, us; and The Manhattan Projects gives us the brightest scientific minds of their time, tasked with protecting American interests, who instead go off on some pretty disturbing tangents.  Ultimately these stories feel like a critique of those in power, as the emperor very much doesn't seem to have any clothes. My sense is that The Black Monday Murders will continue to address these same themes. 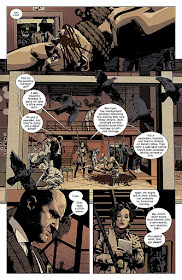 One of the other nice choices I think Hickman makes here is that he centers this story around a murder mystery. It's a great way to show readers an unfamiliar world, as police officers will NY necessity need to ask questions and interact with a lot of different people and in some ways can serve as a guide to this world (such as in Fatherland where a murder mystery is a way to introduce the reader to an alternate history Germany, or The Fuse where a murder sets off an investigation aboard a massive space station in the near future).

The Black Monday Murders feel like a great place to be in order to explore themes of power and greed and secret control; what better setting to explore these ideas than through (magically enabled) finance? This is a world I am very excited to read about further. If you are looking for gorgeous, complex, interesting comic book storytelling for grown-ups, The Black Monday Murders is definitely worth a look.
James Kaplan at 8/10/2016 02:06:00 PM
Share
‹
›
Home
View web version