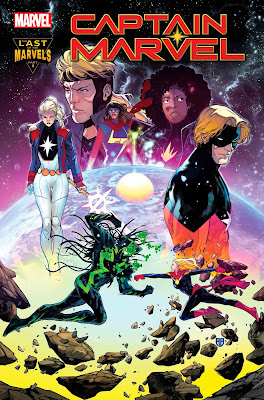 Kelly Thompson has been telling a really excellent, big story over the course of the Captain Marvel series for the past few years now. Thompson is a great writer of action, story, and dialogue. Carol has been to the future, gotten magic powers, battled super-sexists, killed the Avengers (?) and more. And in the current arc, she goes up against the evil Kree figure Vox Supreme, who is targeting anyone who has ever been a Captain Marvel, or a Ms. Marvel, basically anyone marvelous. It's been a very engaging arc, as Carol has to fight against allies and other unexpected faces from her past. Sergio Davila has been doing excellent work bringing this series to life. It's full of action and energy and drama. And I'm excited to see how it concludes over the last few issues of the arc. 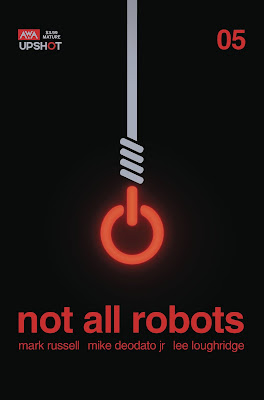 Not All Robots #5 by Mark Russell, Mike Deodato, Jr., and Lee Loughridge, published by AWA Studios
Not All Robots has been a terrific, darkly funny read. The story imagines a near future where robots have taken over most of the jobs and they provide for (and are basically in charge of) humans. Humans are dependent on robots and they resent and fear those robots, and the robots resent the humans that they have to provide for. And things are only getting worse, as there's now a new form of robots that resemble humans, and those have both humans and robots feeling obsolete. Mark Rssell is a great observer of society and human nature, and his work here is as insightful as ever. It's paired with the work of the terrific Mike Deodato, whose muscular, action=packed style of art makes for a really interesting juxtaposition in this satirical story, and also makes the world feel a lot more real than if it were drawn in a more exaggerated style. This is an excellent read. 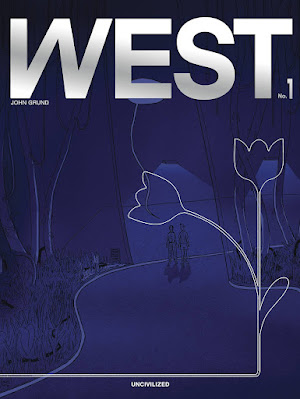 West #1 by John Grund and published by Uncivilized Comics
Two farmers who sell their harvest at farmers markets while they practice magic and smoke herbs with their cat (wait ..what?!) plan a heist on the biggest corporation in the West. Big tech is becoming widespread and society is becoming too reliant on it causing magic to fade and small farms to dwindle. I cannot stress enough how good this new title looks and sounds. John Grund’s artwork is of the kind that is reminiscent to its periodical peers showing some relative similarities to that of the strips in The New Yorker. Yet also, Grund’s art is also quite fresh and innovative making this rural fantasy story one to not miss. The story that he is going to tell in West seems perfectly suited for the times of Big Business and corporate greed while also infusing it with a spell of magic ..and a cat who smokes the herb. And who doesn’t want to read a comic featuring a cat with that kind of descriptor? 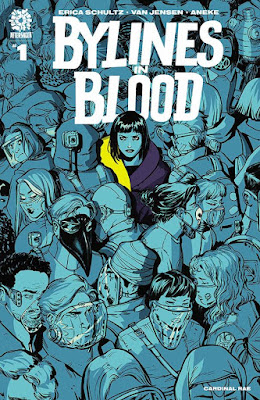 Bylines in Blood #1 by Van Jensen, Erica Schultz & Aneke and published by Aftershock
I am particularly excited for this new series as it seems very much like another favorite comic of mine. The future and the very fabric of truth is on the verge of complete extinction and independent journalism has become a thing of the past. Solicits describe this as a prophetic neo-noir thriller with politicians inventing their own facts and private investigators becoming ronin for the persistently curious. I am not familiar at all with this creative team, but I trust judgment of Aftershock as they continue to bring us great stories and phenomenal artwork. As the aforementioned “other-comic” that seemingly broke ground for this prophetically uncomfortable sub genre, Bylines of Blood has chance to become as important and engaging of a read also. I urge readers to take note of this title. Pick up this debut with me and let’s go for a little ride.
Rob's Picks: 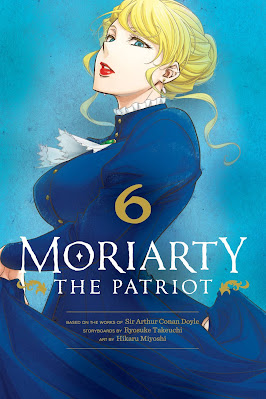 Moriarty the Patriot Volume 6 by Ryosuke Takeuchi and Hikaru Miyoshi (based on the world of Sir Arthur Conan Doyle), published by Viz
This series keeps moving at a rapid pace, bringing Moriarty into contact with Irene Adler and that guy who's known to be fond of deerstalker caps and obsesses over cigarette ash. As we pick up there story here, Irene's got some stolen documents that could chance the course of the Empire--which makes them extremely valuable to Moriarty! I'm a little behind on this one but I like to highlight the series whenever there's a new volume because it's just so well done. The linework is crisp and really evokes the period, which helps keep the story moving while still offering some of the touches that make for "cute manga boys." Anyone can do a Holmes story--and seemingly does--but it's hard to do stories that are up to the quality of the original works. Moriarty the Patriot is one of the best I've read--and I've read a lot of them. 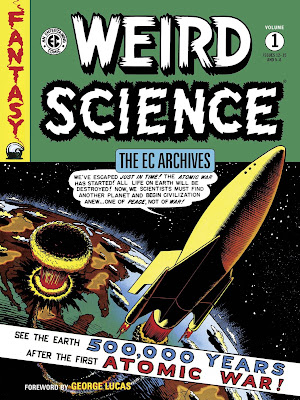 The EC Archives: Weird Science Vol 1 by Various Creators, published by Dark Horse (originally EC)
Ring in 2022 with more classic, affordable EC comics from Dark Horse, as they put together the trade paperback version of this part of the EC Archives, which overs Weird Sciences issues 12 to 15, then issues 5-6 (look, comic book numbering has always been as weird as the stories in this collection, ok?) In this collection, you'll find colorist Marie Severin everywhere, along with Al Feldstein, a very healthy dose of Wally Wood, Harvey Kurtzman, and Graham Ingles, along with stories "inspired" by Roald Dahl and Theodore Sturgeon. Great stuff, with of course the usual caveats about different standards of acceptable language/portrayals/depictions, and I couldn't be happier that these are being redone for people who can't drop the cost of a hardcover for seminal works of comics. I know I say this repeatedly, but I greatly appreciate Dark Horse doing these new editions of older works that were perhaps too pricy for many to enjoy. 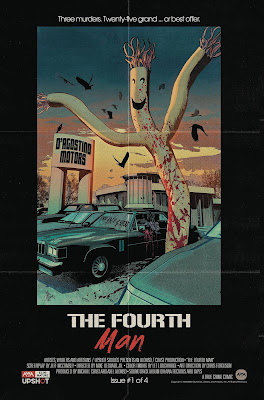 Fourth Man #1 by Jeff McComsey, Mike Deodato Jr., Lee Loughridge, and Chris Ferguson, published by AWA
We all know the car dealership business is a little shady (especially if you've had to go and purchase a car, ever) but sometimes it's downright murder. That's the premise hinted at in Fourth Man, a new series by McComsey and company, which features mysterious deaths, unlikely detective partners, and two rival car dealerships. It's billed as a murder-comedy based on a true story, and that's exactly the sort of thing that catches my attention. I love Loughridge's color work and I think that Deodato's linework will go well with some awesome digital colors. I'm looking forward to seeing how this story plays out and those with similar tastes to mine should definitely give this one a look.
Panel Patter at 1/04/2022 09:00:00 AM
Share
‹
›
Home
View web version