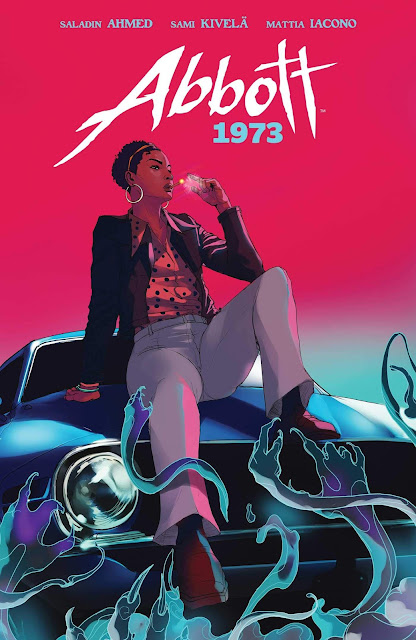 Written by Saladin Ahmed
Line Art by Sami Kivela
Color Art by Mattia Iacono
Letters by Jim Campbell
Published by Boom! Studios
It's 1973 and Elena Abbott has a new job, Detroit may have a new, Black mayor, and she's finally been able to beat back the forces of the Umbral--for now. Maybe things are starting to change. But when the Umbral, racism, sexism, and the past all come together to haunt Elena, she's going to need help if she wants to live long enough to see the results of the historic election in this follow-up volume that suffers from trying too hard to up the stakes and expand the world, but is still a solid horror comic.
I was a huge fan of the first Abbott series, which featured a great story that mixed politics of the time with horror elements, linking the two just enough to make it work. It was propelled strongly by the unbelievably good art by Sami Kivela. I can't say enough good things about Kivela's artwork. His panel layouts are unlike anything I'm seeing from other creators these days, looking like some of the complicated ones J.H. Williams III used to do on Promethea. Maybe referencing Neal Adams's work might be the best example. The panels serve the storytelling, not the other way around, and the ways in which he uses them are things of beauty that require lingering and focus.
Early on, Kivela uses Elana's hair as the outline for a way to remind the reader of the Umbral, which is featured as literally living inside her head, as the saying goes (with awesome colors by Mattia Iacono to show the difference between reality and Abbott's thoughts in that panel). Another great panel in the first issue breaks up the new boss visually, followed by headshots of the staff reacting to his words. Later on, Elena drives right at the reader while we see her destination by a map in the background of the roaring mustang. In that same issue, the spider imagery which starts with webbing and ends with a manifestation of a giant spider builds nicely to the climax, where Abbott must literally escape the web the Umbral is weaving her into. 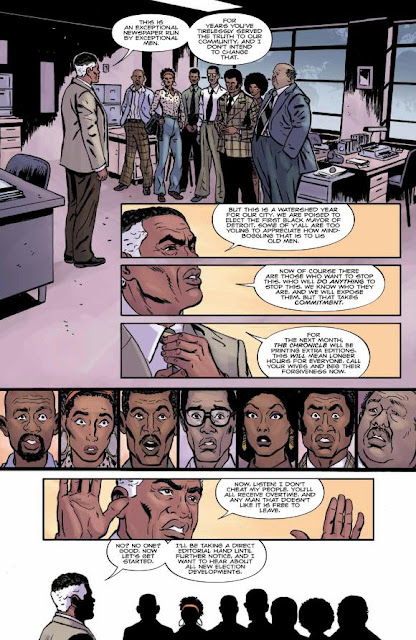 A few more examples I think are worth sharing, showing how Kivela makes the art work even when his collaborator Ahmed gets a little wordy: Smoke rings oozing across gutters while a secondary antagonist (more on that in a moment) gives a monologue, using a curling phone cord to highlight the scenes of an extended conversation, changing the angles, panel sizes, and emotions of the character as they go over key points or confront each other. I've mentioned before, I think that Ahmed still relies a bit too heavily on prose at times when the visuals could do the trick. With a collaborator like Kivela, it's barely noticeable, where in other comics by other teams, we get pages upon pages of static, standing figures.
I could go on all day picking out little artistic moments I like in Abbott 1973. The ways in which the perspective of the reader's eye move across each page, very rarely staying the same for more than a few pages at a time, like starting a scene looking down on characters, then moving to their eye level. How often we see Elana symbolically isolated to reflect how she feels in reality. The off-kilter splash pages, especially the one where Abbott's home with her girlfriend is vandalized. Elena is off-balance and so is the entire framing of the page, right down to the lamp that's not knocked over, but is just slightly askew. It's an artistic clinic.
Unfortunately, it's also a step slightly backwards in terms of the overall story. I feel like in Ahmed's attempt to increase the level of threats Elena faces, he put too many together. It was pretty clear from the early going what they were being written in to do (the boss being a sexist ass and the threat to Amelia from another corner of their world), at least to me, and so I felt like their inclusion didn't add as much, because there was no surprise as they played out. We know that Elena can't keep everything together, adding extra subplots to the mix just felt like a way to toy with Abbott. 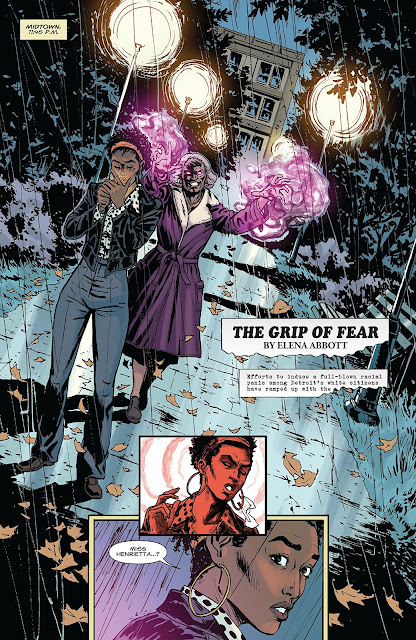 That's certainly not a bad thing on its face, but I'm used to Ahmed telling amazing stories and using existing ideas and tropes to their fullest potential. A lot of Abbott 1973 felt too much like other similar stories, where we're in the middle part of an overall arc and certain things must happen in a particular order to make the character's life difficult. Yes, that's storytelling 101, I know. But my problem here is that I could feel the backbone too strongly because of how it was telegraphed. The tease we get at the end of this volume didn't have the oomph because I sensed it coming a mile away. That disappointed me, honestly, and I admit that's a personal feeling, not necessarily a knock on the book. I was hoping for more twists and turns and instead got a fairly straight road.
Despite that, however, I did really like Abbott 1973 and am excited to see where the story goes from here. Even if it's not as innovative as I felt the first volume was, it's still extremely good. Ahmed's dialogue, though we get a lot of it, is top notch. He nails the characters here, whether it's the mustache-twirling magical villains who can't agree on who best to take down Abbott or the war-traumatized friend of the family, who's willing to march into hell to help Elena and her brother.  The real-life struggles against racism and sexism land squarely and realistically without being cheapened by the magic infused into the story (much like Bitter Root, but in a vastly different type of comic). There's a hell of a lot to like here, including that it holds up on its own, even as it links to what's come before and what Ahmed and Kivela have planned for the final(?) arc. That's a talent all its own that Ahmed is very good at, here and in other comics. Maybe because he's got a strong background in Marvel storytelling, where the goal used to be "treat every comics as someone's first?"
Abbott 1973 isn't perfect, as I noted. That's why it didn't end up on my 2021 favorites list, despite how excited I was for the series return. But it's still a really good comic, with amazing art and characters. I'm looking forward to what comes next for Elena and whether she'll be up to the task. I have no doubts at all that the creative team is going to blow it out of the water, possibly with an ending that's far less than happy for the characters.
Rob McMonigal at 1/03/2022 09:00:00 AM
Share
‹
›
Home
View web version