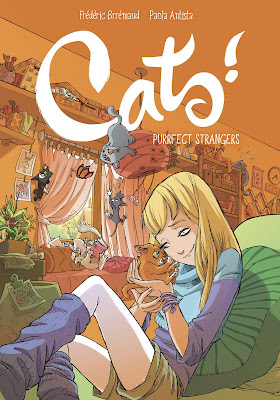 Cats! Purrfect Strangers by Frederic Brremaud and Paola Antista, published by Dark Horse Comics
Dark Horse pics some of the most interesting European comics to translate and being to English readers. The pinnacle will always be (for me, at least) Blacksaad, and while this set of stories about young women and their kitty pals couldn't be more different from the ultra-violent noir, it still looks to be yet another great book to add to their string of successes. Watch as friends of two and four feet grow up together and learn about each other, drawn in an exaggerated style that emphasizes the emotions of all the characters. I've only seen the sample pages online so far, but I love the angles chosen by Antista, which prioritize movement and action. I'm a sucker for cat books of all kinds, from cute to creepy, and I can't wait to see Dark Horse's quality applied to the translation and production values. This collection has 3 of 6 "albums" from the series--I hope we can look forward to the rest in near future. 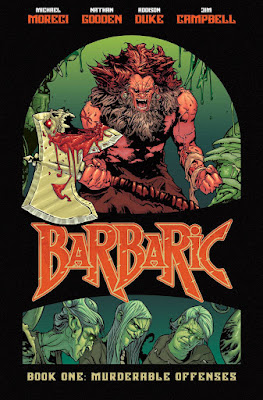 Barbaric Vol 1 HC by Michael Moreci, Nathan Gooden, Addison Duke, and Jim Campbell, published by VAult
Think you've read every kind of sword and sorcery story there can possibly be in comics? Think again! Long-time Panel Pal Mike Moreci's outdone himself this time, with one of his best comics yet. Owen is cursed to use a talking sword to help people, and the sword is thirsty for the blood of the evildoer. Fortunately, for the sword but not necessarily Owen, there's plenty of evildoers to be had. A chance encounter with a not-quite-as-bad-as-the-others witch throws him into conflict with a cult that might be the ones to end the curse--by killing Owen outright! Foul mouthed and fun, this is a weird combo of Howard, Moorcock, Leiber, and Triumph the Insult Comic Dog. With loose art by Gooden that's gritty but not grim, Barbaric (SPOILER ALERT) one of my favorite comics of 2021 and is not to be missed! 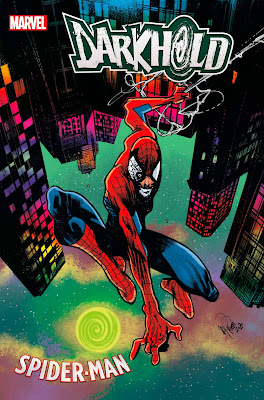 Darkhold Spider-Man #1 by Alex Paknadel, Diogenes Neves, James Harren, and others, published by Marvel
I read Marvel behind via Unlimited, so I'm not sure what's going on with this beyond the fact that the Darkhold is an evil book and anytime Spidey gets involved in horror, I'm all for it. While others might disagree, I think his character and personality work well as the "everyman" faced with untold horror. So I'd be interested anyway. But the premise--Peter might literally lose his mind--adds even more oomph. And when you add on Panel Pal Alex Paknadel getting into the mix, then I'm counting down the days until this hits my digital device. This sounds like it's going to be Amazing, to coin a phrase. 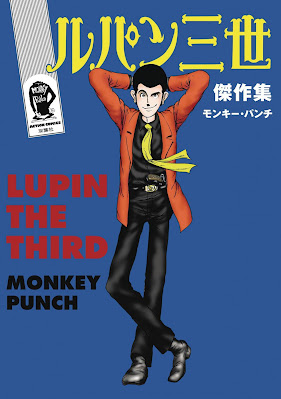 Lupin the 3rd Greatest Heists Classic Manga HC by Monkey Punch, published by Seven Seas
Master Thief Lupin III is an amazing anime that's been featured in so many different versions over the past few decades. It's based on a manga that, to be charitable, can be rather difficult to read. Not because it's poorly drawn or translated--far from it. But if Lupin is, to some degree, the opposite number of James Bond, he's even worse than 007 when it comes to women. The manga is extremely adult in tone, often jarringly so. Reprinting it all makes that extremely obvious. So Seven Seas doing a reprint "best of" might be the best way to explore the history of the character, especially if all you know are the TV shows/movies. You'll meet Lupin, his friends, the dedicated (if not especially good at his job) Inspector Zenigata, and more in these pages, collated as a tribute after Monkey Punch's passing.
James' Picks: 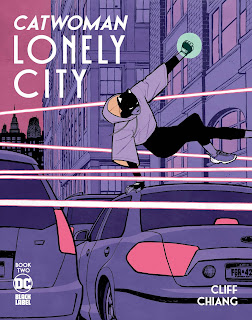 Catwoman: Lonely City by Cliff Chiang #2, published by DC Comics
I just wrote about this comic for my year-end favorites, so let me quote myself:

Catwoman: Lonely City only had a single issue published this year [Note: By the end of the year a second issue should be released], but it was that good of an issue that I couldn't not acknowledge it. This is a fantastic story about an older Catwoman, out of prison now and returning to a very much changed Gotham City. And mostly, you should read this because it is created by Cliff Chiang. Chiang is one of those artists where I will check out literally anything he does. His work is that compelling and meaningful to me. He has a gorgeous, distinct style that is incredibly accessible and inviting. The closest parallels I can think of is a slightly-more Manga influenced Fiona Staples (so, incredibly high praise). His work on Wonder Woman, and even more so on Paper Girls, was absolutely legendary. Not surprisingly then, I expected to love this series, and I am not disappointed. It’s Cliff Chiang writing *and* drawing, which is all I need to know. Chiang seems (thus far) to be a terrific writer, and he's already an incredible visual storyteller, so I have no doubt that this will continue to be great. This story seems to be about aging and adjusting to changed realities, something to which I think everyone can relate. 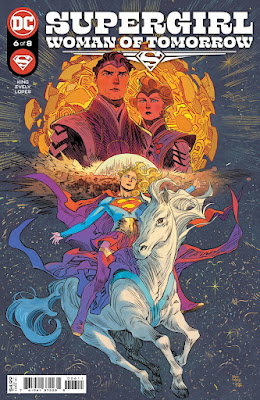 Supergirl Woman of Tomorrow #6 by Tom King, Bilquis Evely, and Mat Lopes, published by DC Comics
I ALSO just wrote about this comic for my year-end favorites, so let me quote myself:
I read lots of good comic books, and sometimes read excellent comic books, but it’s only occasionally that I read something that I would really describe as being extraordinary or special. Supergirl: Woman of Tomorrow is one of those special, extraordinary comics and my favorite superhero comic of 2021. It’s a thoughtful, heartbreaking, gut-wrenching, occasionally very funny comic, that’s brought to life with truly next level art and colors. This is some of my favorite work ever from writer Tom King (which is high praise because I love a lot of King’s work), and the combination of artist Bilquis Evely on art and Mat Lopes on colors is an absolute revelation. If you’re not reading this comic, you’re missing out on something really special (my full review here). 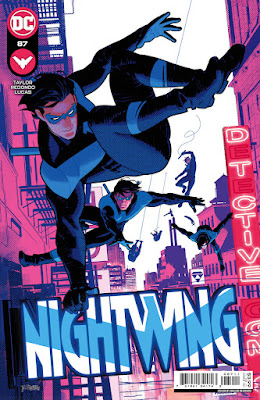 Nightwing #87 by Tom Taylor, Bruno Redondo, and Adriano Lucas, published by DC Comics
I loved the first few issues of this comic, when it was focused on Dick Grayson's new mission and status quo in the City of Bludhaven. The story got pulled into the "Fear State" tie-in which was of less interest to me because I wasn't really following it. However, when this book is written by Taylor and drawn by Redondo and colored by Lucas, it's an amazing book. A real breath of fresh air. Like when Waid, Martin, and Rivera came in and brought all sorts of life and energy to Daredevil. Redondo is an amazing artist; his style is super appealing and he's a remarkable visual storyteller. I'm thrilled for this upcoming issue as every single page is one part of a story that is basically a continuous panel. That sounds super fun, and I'm all for it.
Sean’s Picks: 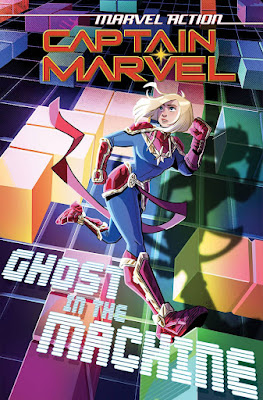 Christmas is right around the corner and you’ve found yourself in need of a supplemental gift of some sort to balance out your holiday gift-giving. Hypothetically of course, because none of us practice procrastination as a tradition..do we? Nevertheless, this Marvel Action Captain Marvel trade paperback is the perfect gift for readers of all ages, and especially those who are of the tween and preteen age bracket. We’ve got Carol Danvers spiraling about inside one video game after another looking for clues on how to catch the criminals and save the day. Oh, and there’s a few Squirrel Girl cameos, which always makes for a good time. It was a bummer to hear that IDW recently decided to halt the Marvel Action line, but it’s good to see that they went out with a bang. Maggs has been scripting this version of Carol for awhile with several collaborators on illustrations, but the issues with Sweeney were the ones that always sung. Cheers to a good run. I look forward to what see these creators find themselves part of next. 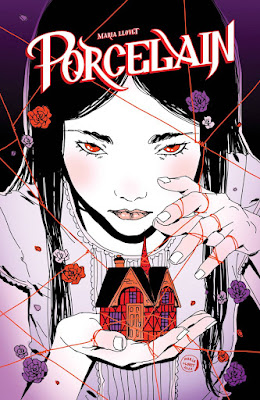 Porcelain 5 by Maria Llovet and published by Ablaze

It’s to that point now where if there’s a Llovet book being published then I’ll be flipping through its pages. The artwork is consistently exquisite as it caresses your optic nerve until there’s no ability to look away. Yea. It’s like that. In Porcelain, Llovet softens the sensualities of what most would expect and swaps it out for a nightmarish trip trapped inside a life-size dollhouse. This book made it to my year end favorites list. Be on the lookout for that one sometime next week. Until then, find this series. Issue five, out this week, is the conclusion and I’m anxious to get my hands on it.
Panel Patter at 12/21/2021 11:00:00 AM
Share
‹
›
Home
View web version