It's beginning to look a lot like comics! Catch Its for December 15th, 2021 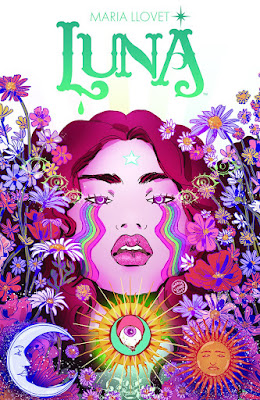 Luna TP by Maria Llovett, published by Boom! Studios
A comic headed straight to my favorites list gets the trade paperback treatment this week. Superstar artist Maria Llovett writes and draws this amazing series about cultists in the Age of Aquarius. As I wrote originally:

It's the 1960s and small commune/cults are everywhere. When a young woman stumbles upon one, however, with specific plans for sex an immortality, she's placed face to face with more than she bargained for, and getting out might not be an option. Whether it's been the extremely creepy erotic Faithless (with Brian Azarrello) or her own work on books like Heartbeat or Loud. Maria Llovet's comics are absolutely stunning. I immediately became a fan as soon as I saw her work on Faithless, and I've been so happy that Boom! and other publishers have been bringing more of her work to your local comic shop or digital device.

This series just kept getting better as the issues came in. If you missed one of the best comics I read in 2021 as it was published, make sure you add this to your personal holiday gift list. It's a dangerous treat! 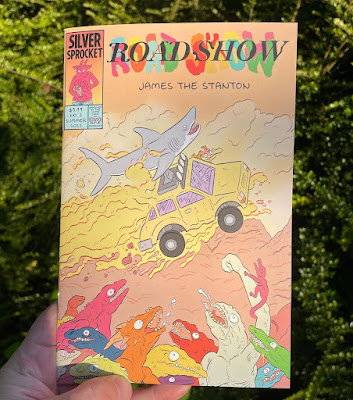 Roadshow #1 by James the Stanton, published by Silver Sprocket
James the Stanton is one of my favorite indie creators, and I'm always happy to see what he's up to, either on his own, or within an anthology from one of the many cool small presses out there. This time, he's doing a racing comic (an underrepresented genre, as I noted earlier this year) and I'm sure it's going to be full throttle. I don't know much beyond the promo material, which describes it as a battle race featuring "monolithic rock monsters, hoards of lizards, sharks and truck driving birds." That's either going to appeal to you or not. For me, it's catnip. James the Stanton's loose lines wiggle all over the page, organized chaos forming images that ooze across the panels. However you're picturing this comic, I have a feeling it will look far different--and even better--than you can imagine. 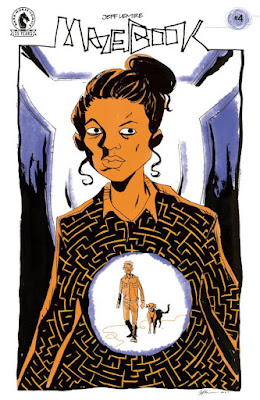 Mazebook #4 by Jeff Lemire, published by Dark Horse
Mazebook is a terrific comic and it has everything I want in a book where Jeff Lemire is acting as full cartoonist. It's a compelling, sad story, with a believable protagonist, who suddenly finds himself in a world full of impossible things. Including hope. Is it real, is it a delusion? Who can say. But what I can say is that this is a really moving book, and Lemire is out there taking artistic risks and changing up his art style a little, making it looser and scratchier. You'll definitely want to pick this one up when it's collected. 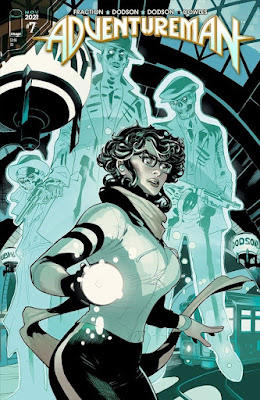 Adventureman #7 by Matt Fraction, Terry Dodson and Rachel Dodson, and Clayton Cowles, published by Image Comics
Adventureman is the book that consistently brings me smiles. It's pure fun and adventure (hence the title), and full of the wit, humor, and great storytelling you'd expect from a comic that is written by Matt Fraction and Illustrated by Terry and Rackel Dodson, with letters by Clayton Cowles. In case you don't know, that's an A+ creative team, and they are firing on all cylinders. The artwork from the Dodsons is absolutely beautiful, with amazing character and design work. If your comics pull list needs more unbridled joy in it, this is the book you need to pick up. 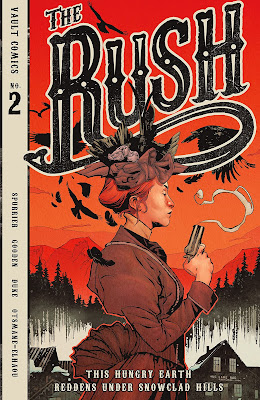 Rush #2 by Si Spurrier, Nathan Gooden, Addison Duke, and Hassan Otsmane-Elhaou, published by Vault Comics
Shifting gears from my last pick, The Rush is off to a really promising start as a horror book. Vault has previously put out some great horror books (The Plot, Black Stars Above) and this book feels poised to join that group. It's a story of a mother going into the desolate Yukon territory to find her son, set in the late 19th century. It joins Black Stars Above as another really creepy horror story set in rural Canada in the 19th century. But let's talk about Nathan Gooden, the artist on this series. He is an absolute star artist in the making, someone you should definitely watch in the coming months and years. His work in this book is absolutely stellar (as was his earlier Vault project this year, Barbaric). It's detailed, grounded, great at conveying action and emotion, and a delight to look at. Addison Duke does a wonderful job on colors in this comic, giving the whole book a faded, washed-out feel that works so well with the tone and setting of the story. And Hassan Otsmane-Elhaou does excellent work in lettering this creepy, unsettling story. Pick it up! 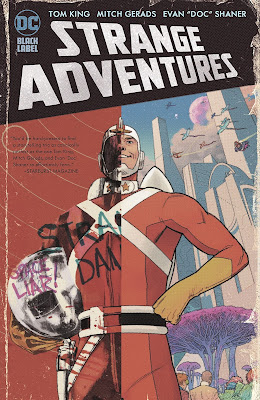 Strange Adventures HC by Tom King, Mitch Gerads, and Evan "Doc" Shaner, published by DC Comics
Strange Adventures is a fantastic read about war and memory and terrible choices people feel that they have to make in difficult situations. It's also about race and who gets to be a hero, and a whole other host of issues. It's also just an incredible book to look at, given that it is illustrated by the incredible duo of Mitch Gerads and Evan "Doc" Shaner. Gerads and King previously collaborated on several exceptional comics, The Sheriff of Babylon and Mister Miracle. Gerads illustrates the "present" of the story, and Shaner handles the flashbacks. This division of labor works perfectly in the story, and Shaner's classic, brighter, slightly more "cartoony" style works well for stories of war and adventure, and Gerads does great work in portraying arguments, politics, and quieter moments. This is a terrific read.
Sean's Picks: 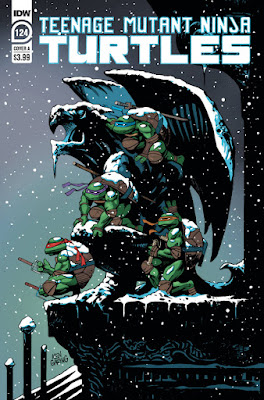 TMNT Ongoing #124 by Sophie Campbell and Ken Garing and published by IDW
The teenage mutant ninja turtles always find a way back into my reading routine. I can go on a several month long hiatus only to find myself right back in the thick of it. There’s no question that the IDW TMNT ongoing series is like the best bowl of warm oatmeal you’ve ever seen on a mid-December cold winter morning. To juxtapose the idiom, it’s there to make old hearts feel young again one half shell at a cowabunga-time. With all that said, this weeks installment to the long-standing series has given art duties to the legendary Ken Garing. How it has taken Garing to be given access to this fearsome foursome is beyond anyone’s compare. With Sophie Campbell still managing scripts, the new chapter starting here seems to be just what was needed to get me back to paying attention again. Splinter may be gone, but but but Ken Garing has arrived. No Holds Bard #1 by Eric Gladstone and Gabrielle Kari and published by Behemoth Comics
William Shakespeare and William Page roaming the ancient streets of England as superheroes solving the crime of a vanished Queen Elizabeth I, all in iambic pentameter. That’s the “catch-it”. That’s all that needs to be said. Go get this Behemoth debut right now! 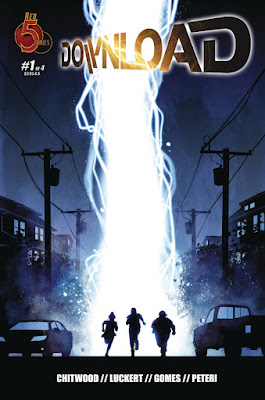 Download #1 by Scott Chitwood and Danny Luckert and published by Red 5
What brought my attention to this debut first was Danny Luckert on illustrations. The last I saw his work was in The Red Mother with Boom, and I cannot wait to see what sneaky horror images he provides with this new indie. What made my attention stay with this debut was its plot as a mysterious space light gives people the ability to see designs in their mind so as to build strange new devices. What do these devices do? Where will this lead? I’m paying attention. And so should you, says I.