Atlantis Attacks the New Year: Catch Its for December 29th, 2021

What an amazing year for comics! Everyone's been doing their end of year lists, so it's up to is here at Panel Patter to end an extremely fun year of picking comics we think you should read! 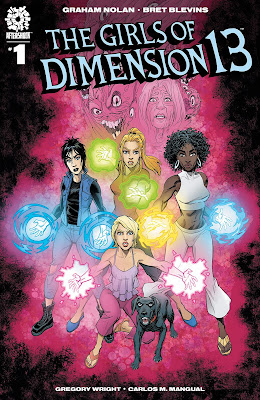 Girls of Dimension 13 by Graham Nolan, Bret Blevens, Gregory Wright and Carlos M. Mangual, published by Aftershock
This story is an unrepentant love-letter to Doctor Strange, even if a few of the details about the main Sorcerer Supreme are changed. The idea of ordinary people discovering extraordinary powers going into different dimensions to save all of reality isn't new, but it's the execution here that works so well. Nolan's scripting of the young women who have to learn how to make their powers work, Blevens' designs for the dimensions, which are a great tribute to Ditko (who gets a rather odd naming shout out but somehow I think he'd have liked it), and Wright' brilliant color scheme all come together to make a comic that might have started as a failed Marvel pitch (for all I know) but ended up as pure joy to read. Spoiler Alert: This is on one of my favorites lists! 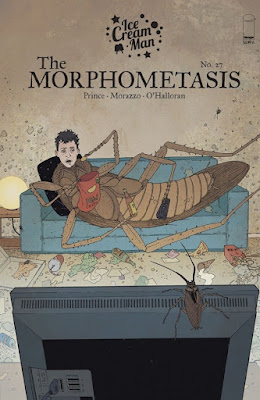 Ice Cream Man #27 by W. Maxwell Prince, Martin Morazzo, Chris O'Halloran, and Good Old Neon, published by Image
The creepy pastiches continue in Ice Cream Man, which goes literally Kafkaesque in this issue, titled "The Morphometasis." I don't typically go with promo copy, but the hysterical "This is like that famous story, but the other way around" captures the premise of the issue perfectly. A bug turns into a human and suffers, because this is Ice Cream Man. Morazzo's art continues to be amazing on this title, with some of the images here really showing some awesome symbolism, especially on the final page. I'm not sure where this ties into the larger story, but as I noted (SPOILER!) in my comments on my favorites list, I actually like it better when that subplot is kept to the background. This is a good issue for those who haven't tried the series yet to get a feel for what it's about.
Atlantis Attacks The Original Epic by Various Creators, published by Marvel
A bit of a nostalgia pick, I admit--I haven't re-read this in over a decade and it might completely suck. But it was the first set of linked annuals I went back and grabbed in the longboxes (I miss when I used to longbox hunt, but my storage space doesn't!) and I remember loving how the entire Marvel Universe was caught up in the intrigue, even if some of it was a little strange. The art varies wildly, of course, as does the quality of the scripts, and I do wonder how the various plotlines creators tried to slip in from the monthly issues read when they're out of context. But the overall idea of a hail-mary by Namor's enemies to take over the world using powerful dark magic (and the hero's own families!) is a really cool high concept, done without really overwriting characters or making them feel out of context, as so often happens today. Plus you get lots of fun team-ups, like Spidey and She-Hulk against the Abomination, and odd but cool ideas like the Punisher having to stop a drug that's aiding the villains' takeover. Again: Nostalgia City, but I'm looking forward to the re-read and maybe you will be, too.
Sean’s Picks: 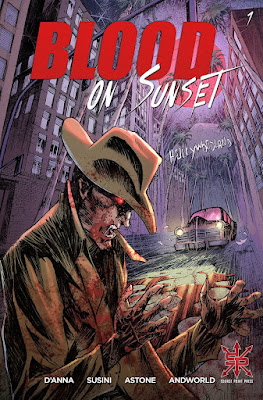 Blood on Sunset #1 by Mark D’anna, Arjuna Susini & Vittorio Astone and published by Source Point Press
Here is a story about vampire crime syndicates and murder and Hollywood and all the expected genre crossover tropes one would hope for. I anticipate this to be a wild ride and with Susini on art duties this should be terrifying to look at. Find this debut and jump in early. There’s no telling we’re this bizarre story could go. 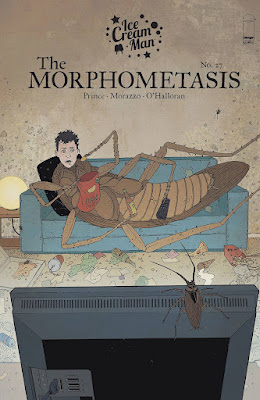 Ice Cream Man #27 by W. Maxwell Prince, Martin Morazzo & Chris O’Halloran and published by Image
Capping off the year with another installment from the ice cream man with this one entitled “The Morphometasis”. There’s a centaur reclining on the couch on the cover but instead of the body of a horse it is a cockroach. As with most every last issue of ICM this stand alone story will be memorable and disturbing and worth every moment spent turning these unfortunate pages. I love this series and push all else aside when it has a new issue. Consider this your reminder to do also. 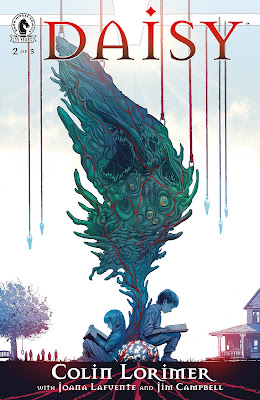 Daisy #2 by Colin Lorimer, Joana Lafuente & Jim Campbell and published by Dark Horse
First issue was a double pick from us last month. This month I am equally, if not more excited for its follow-up. This alternate take on what it means to trust in the faith that drives you will draw you in with every last gorgeously illustrated page. Lorimer’s artwork is second to nearly none and his story in Daisy has quickly made this a title giving me reason to climb any hill to tempt dying on.
Panel Patter at 12/28/2021 11:00:00 AM
Share
‹
›
Home
View web version