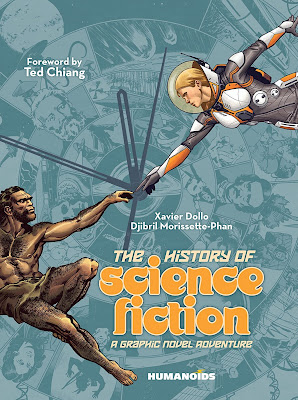 The History of Science Fiction by Xavier Dollo and Djibril Morrisette, published by Humanoids
It's no secret I'm a huge fan of speculative fiction generally. I grew up on it from my mother's love of all things sci fi/fantasy/horror, which led me quickly to Stephen King, Ray Bradbury, and so many others. Comics were a natural outgrowth of this, really. And of course, I'm married to my award-winning writer spouse (and periodic Panel Patter contributor) Erica Satifka. So I'm hugely excited to sit down and read The History of Science Fiction, a massive undertaking published by Humanoids. Looking to cover everything from Mary Shelley to the modern era, this is ambitious as hell--just like the best the genre has to offer. Naturally, there's a ton of text, but the illustrations are right there, too. The samples I've read so far show a varied artistic pallet (essential to any history project like this), with changes in style, coloring, and structure, while the words keep things moving in both dialogue bubbles and text boxes. I really dig the way they integrate the awesome visuals already present in sci fi literature, too. It's going to take me awhile to read this all the way through, but I can't wait. This is a perfect gift for the sci fi fan in your life--and then pick up a second copy for yourself, too. 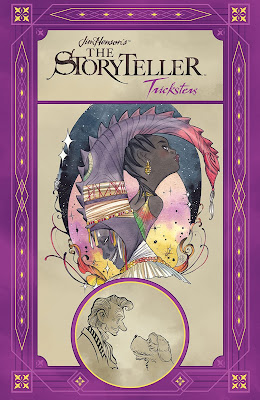 Jim Henson's Storyteller: Tricksters by Various Creators, published by Boom! Studios
It's a shame that the real-life Storyteller show didn't get as much attention as it deserved at the time. I think if they rebooted it now, the show would be a top streaming series. I'm so happy Boom! is using the concept to tell amazing all-ages anthology stories, because it's a perfect fit. This time around, the theme is tricksters, ranging from an awesome Loki story that doesn't try to imitate a popular version of the mythological figure to tales of Anansi (which has a really cool visual of webs forming out of the lumpy liquid words "story"). Also included are Eshu (admittedly new to me, so that was a great treat!), and a story of a fox from Middle Eastern Culture (also new to me, also awesome). The art varies between each to fit the story, with each artist working to create a world their chosen characters alone might inhabit. This is definitely one of my favorite of the Storyteller series so far.
Rachel's Pick: 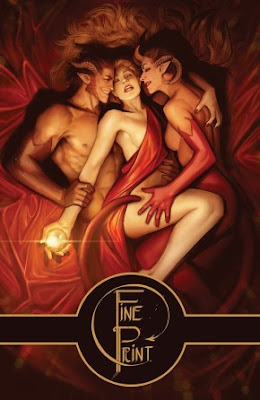 Fine Print by Stjepan Sejic, published by Image imprint Top Cow
At the start of the pandemic, I noticed that Menachem Luchins, the owner of Escape Pod Comics, was offering a recommendation service. I asked for a title that wasn't too violent, was funny, had character development, and that had beautiful art. Menachem recommended Death Vigil by Stjepan Sejic. This was my introduction to Sejic's work and I was blown away with how gorgeously he draws his characters. So when I saw that Fine Print, a new series, was starting, I immediately picked it up. There's so much attention to detail. Yes, the vast majority of his characters are very good looking, but they don't all look the same. Characters have different body shapes, different types of clothing, different ways of carrying themselves, etc. And when it comes to depicting the emotions of someone who just found out that their crush is engaged, Sejic perfectly nails the facial expressions and body language. Note that there is a lot of sex with are a variety of pairings (man and woman, man and man, woman and woman, a threesome etc.) in this volume; you probably don't want to leave this book out on your coffee table if you're hosting Thanksgiving dinner. However, there's also humor and understanding of depression and heartbreak. Sejic doesn't just want to draw beautiful people making out, he also wants to get to the heart of what makes a person happy or miserable.
James' Picks: 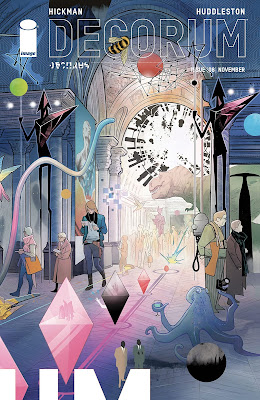 Decorum #8 by Jonathan Hickman, Mike Huddleston, Rus Wooton, and Sasha Head, published by Image Comics
I'm thrilled for the return of Decorum. This is high-level, weird science fiction which feels like it has a micro story, a macro story, and an "I have no idea what the hell is going on" story.  But that's fine because it's really engaging and is one of the very best looking comics out there. Mike Huddleston is an absolute beast on art - he's like 5 incredibly talented and distinct artists all rolled into one.  The micro story follows an incredibly well-mannered assassin, and he attempts to train a courier as a protege. There's also a story about maybe trying to birth some sort of robot messiah, and there's god? I don't know. It's a lot, but I really love it. Apparently this is the conclusion of the series, so I just recommend you read it when it's collected. Amazing work all around, including incredible design work and lettering from Sasha Head and Rus Wooton, respectively. 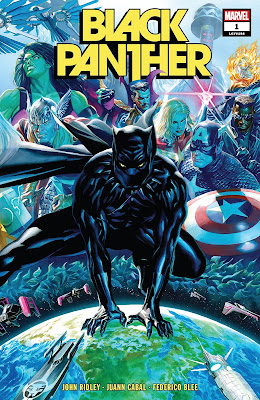 Black Panther by John Ridley and Juann Cabal, published by Marvel Comics
This is a brand new creative team, as Ta-Nehisi Coates concluded his run on Black Panther earlier on this year (the latter part of that run was with Daniel Acuna and I was a big fan). But this is a new creative team that I'm excited for. The story is being written by John Ridley, who is an Oscar-winning screenwriter (12 Years a Slave) but has also entered comics this year in a big way, with some Batman comics, and with The Other History of the DC Universe. I really enjoyed the latter book, as it is definitely on my shortlist for favorite comics of the year. It's a really big, ambitious project, which told the story of the DC universe but from the perspective of characters from underrepresented populations. Now he's taking his talents to Wakanda and I couldn't be happier. He's teaming up with Juann Cabal who is a fantastic superhero artist (I really enjoyed his work in X-23) and this is a great team and a promising new start. 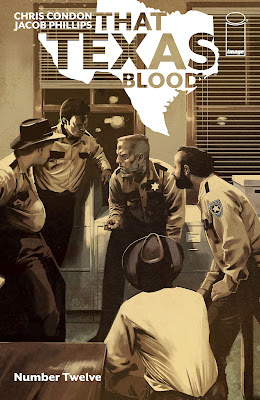 That Texas Blood #12 by Chris Condon and Jacob Phillips, published by Image Comics
That Texas Blood is one of my favorite comics I'm reading right now. It's a fantastic murder-mystery crime story, but it's more than that. It's paced more like a movie from the 70's, when the director wasn't in quite as much of a hurry to get us from point A to point B to point C. This story takes pace in rural Texas, and while I've never been to rural Texas (just been to a few cities there), I found myself getting a sense of place from the story. The current arc involves the Sheriff (in the present day) telling the tale of a grisly case from decades before.It's tense and eerie and suspenseful, and the art from Jacob Phillips is perfect for this tense crime story.
Panel Patter at 11/23/2021 11:00:00 AM
Share
‹
›
Home
View web version