Reading Comics can make you a Human Target! Catch Its November 3rd, 2021 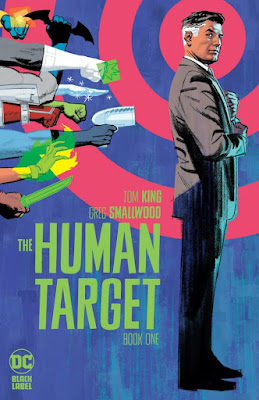 I've been SO excited for this comic ever since it was announced. I'm a huge fan of almost everything that Tom King has written (I really enjoyed Strange Adventures and I am LOVING Supergirl: Woman of Tomorrow). But I've gotta be honest, the real draw for me is artist Greg Smallwood. GREG. SMALLWOOD. Smallwood is an artist that does absolutely stunning work. I was such a huge fan of his work in the Moon Knight series he did with Jeff Lemire and Jordie Bellaire (read me going on and on about it here). He has a clean line, and immaculate character work, and his panel payout is incredibly interesting and innovative. You should also read his work in this Marvel series of stories. That Marvel series feels like it might have been something of the inspiration for the new Human Target series. I'll be honest, I don't know anything about the character of the Human Target. But, everything I've seen of this new series gives it this bright, stylish, sexy 60's spy vibe, which is more than enough to sell me on this series. This one is sure to be a delight. 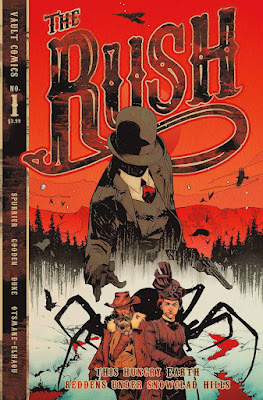 Vault has had some excellent horror series (like The Plot, Deep Roots, and Black Stars Above) and The Rush looks like it is going to continue in the tradition of those great books (links to all of my reviews above). Like Black Stars Above, this is a story of horror in the remote, 19th-century Canadian wilderness (which seems like a great horror setting and a ROUGH place to be). And I already know that I love the art in this first issue, having given it a read. It's gritty and detailed and grounded, but also weird and imaginative. The team of artist Nathan Gooden and color artist Addison Duke make for a fantastic combo. Duke uses some very washed-out, sepia-toned colors, and gives all the pages of the story a really fun weathered feel, so this definitely feels like an artifact from a long time ago. I loved this same art team earlier this year, in the Vault series Barbaric. So what I'm saying is, this book is great, Vault books are generally pretty great, and you are going to want to check this out. 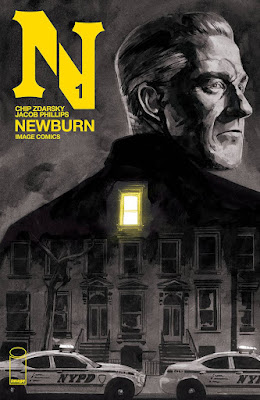 I've read Newburn #1 and I can tell you it's an excellent comic. It's the story of a former New York police officer that now works as a private investigator on behalf of various mob families. He walks a delicate line, as he works closely with criminals, but also maintains his contacts and relationships with the NYPD. The first issue is fun and engaging, and creates a character that feels different than ones that I've seen in crime comics previously. But I'm not surprised, as it's from an excellent creative team. Chip Zdarsky has been on an amazing comics run. Note that long ago, I knew him as the hilarious illustrator of Sex Criminals, who, along with Matt Fraction, was just a really wild and crazy guy. But it turns out that Zdarsky is an incredible comic writer as well - he's written various Spider-Man comics have all been excellent, as has his Daredevil and independent books such as Stillwater.  And Jacob Phillips has been doing absolutely excellent work in That Texas Blood where he is both line and color artist. That's another crime comic (albeit one with a very different feel) that I would highly recommend. Anyway, Newburn is a strong debut and a lot of fun for anyone interested in genre crime or detective stories. 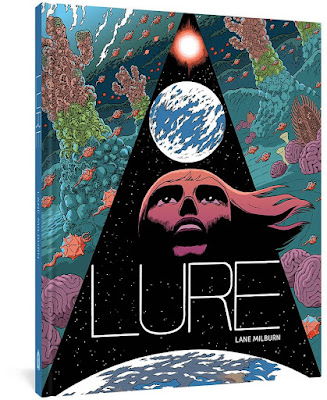 Lure by Lane Milburn, published by Fantagraphics
Science fiction stories have the power to shine lights on areas we'd otherwise prefer not to think about, especially when they increasingly cut closer to home. Milburn's Lure is a perfect example of this, taking the (probably? possibly?) fantastic idea of being able to live on other worlds and turning it into rich-person tourism, with artists serving at the pleasure of the highest of the upper classes. As the Earth continues to degrade, our protagonist finds out the corporate overlords are even worse than everyone expected--and that's when things get really bad. With stunning color contrasts, imaginative ideas for this speculative world, and soft lines that evoke Tillie Walden, Lure definitely, well, lured me into wanting a copy for myself. I'm betting there's quite a few of our readers who'll want to get a copy, too, because this is an awesome combination of science fiction, visual storytelling, and morality play. 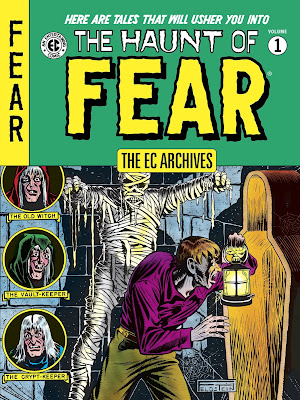 The Haunt of Fear Volume 1 by Johnny Craig, Al Feldstein, Gardner Fox, Harvey Kurtzman, Harry Harrison, Wallace Wood, Graham Ingles, Jack Kamen, and Jack Davis, among others, published by Dark Horse (originally EC)
Oh, please like Halloween being over was going to stop my horror picks. Of all the genres right now going on within comics, horror is not just my personal favorite--I think it's where some of the best work is being done right now. But there's always time to go back to the classics, and the EC classics are some of the best. Dark Horse continues reprinting the original issues as created, with updated colors, this time turning to the Haunt of Fear--covering issues 15-17 and 4-6. (Yes, that's not a misprint--so much for "numbering used to be easier to follow in the old days!) While these stories vary in quality and of course are also written for a different time, whenever you can read work from Craig, David, and Wood all in the same book for about 20 bucks, you're in for a steal. I'm so happy these are now in affordable editions for all comics fans to enjoy! 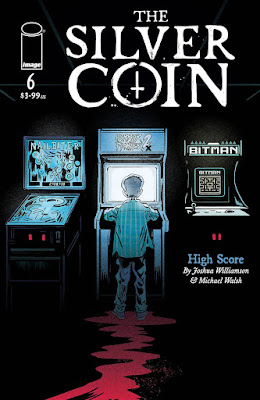 Silver Coin #6 by Michael Walsh and Joshua Williamson, published by Image Comics
Typically, an anthology series with a recurring theme uses a narrator. Not so with Silver Coin, which continues into an ongoing series after the awesome mini-series wrapped up. The conceit here is a cursed coin, forged when a woman sold out her friend to avoid a puritan's wrath, continues to wreak havoc with whomever gets ahold of the coin. Working with awesome collaborators, creator Michael Walsh keeps the settings varied. For this first new issue, he and Williamson combine to find a kid who's tired of losing coins to his favorite fighting game. When he uses the Silver Coin, everything changes. A perfect mix of horror and a concept from my childhood. The first five issues of this series were extremely solid and I see no reason for that to change anytime soon. A nice twist on the one-person anthology idea that, along with Ice Cream Man and some other books, is showing Image isn't done being a horror provider of choice just yet. 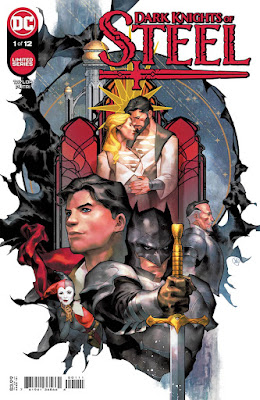 Dark Knights of Steel #1 by Tom Taylor, Yasmine Putri, and Others, published by DC Comics
Not sure why DC doesn't call them Elseworlds anymore, which was an awesome name and branding, but here we have an alternative DC in which Superman's ship lands not in modern America, but in a Medieval time. The explosive change will have ripple effects in a universe set up by Taylor and Putri. I don't know much about this one beyond the premise but the art looks slick and very realistic, with a nice fantasy vibe that looks like it's going to work perfectly for the story. Plus with the cover teasing a literal Dark Knight, I can't wait to see what Taylor, Putri, and their collaborators have in store here.
Kelli's Pick: 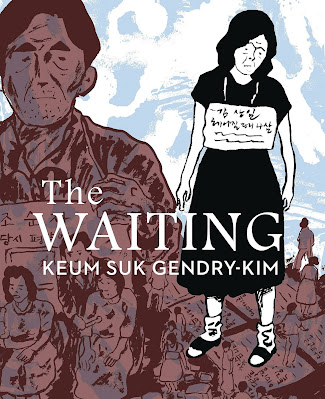 The Waiting by Keum Suk Gendry-Kim, translated by Janet Hong, published by Drawn and Quarterly
The Waiting is the follow up novel to Keum Suk Gendry-Kim’s award winning graphic novel Grass. Just like Grass it is a heart wrenching, somber and important read. It tells the story of families torn apart by war, of people separated forever, never knowing the fate of sisters, brothers, children, and parents. The Waiting was inspired by the true story of Gendry-Kim’s mother who was separated from her older sister at the beginning of the Korean War. All of Gendry-Kim’s mother’s family made it out of North Korea, but her sister missed the last train out of Pyongyang. And just like that her sister became a ghost. Graphic novels like the Waiting should be required reading, for me it hit as deeply, if not more so than wartime classics such as The Wars, A Diary of Anne Frank, and Obasan. Just make sure you have a box of Kleenex near by.
Panel Patter at 11/02/2021 11:00:00 AM
Share
‹
›
Home
View web version