Welcome to Catch it at the Comic Shop, where the Panel Patter team looks at what's coming out at your favorite store or digital device this week. Each one of us that participates picks up to five items due out this week, with a little bit about why we like them. (NOTE: We use solicitation material for this, so if we miss creators, please talk to your publisher!) Sometimes we might only have a few items to share, other weeks, keeping it to five will make for hard choices. Here's what the team wanted to highlight this week..
Rob's Picks: 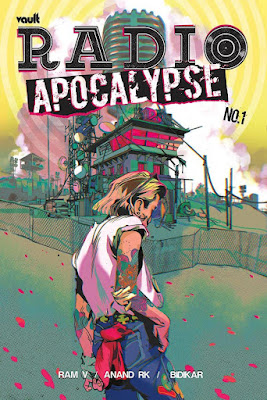 Radio Apocalypse #1 by Ram V, Anand RK, Anisha, and Aditya Bidikar, published by Vault
Bakerstown is one of the few communities left after a disaster turns the world to hell. A radio station gives some hope to the people there, all 94 of them, but it's not enough to overcome human nature--which often reverts to base instincts out of desperation. Both the good and the bad are on display in this first, admittedly bleak issue. This is a really dark comic, despite Anisha's bright colors, and not for those who want a sense of hope--at least, not yet. Ram V's dialogue and pacing are as sharp as ever while Anand RK's linework provides a vast, abstract canvas for the story to play out. With new residents on the way who've lost their own community, things are likely going to only get worse in a comic that's setting up to be excellent but definitely challenging to read. 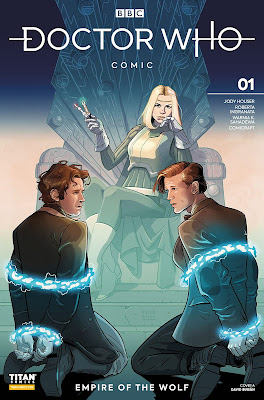 Doctor Who Empire of Wolf #1 by Jody Houser, Roberta Ingranata, and David Buisian, published by Titan comics
While I really like Dr. Who, I admit I've fallen away from the core TV series. But I still enjoy reading the comics, especially those written by Houser. This time around she's playing with the 8th(!!) and 11th Doctors, an interesting pairing to be sure as the 8th Doctor has a lot of un-mined potential. Better yet, theu appear to be going up against an evil version of Rose Tyler, who is typically associated with the 9th and 10th Doctors, so Houser is pulling against type. Turns out "our" Rose isn't done with the Doctor after all, and has to find a way to help two different incarnations than she's used to stop a figure she'd never expect--herself? This should be a lot of fun for long-time Dr. Who fans!
James' Picks: 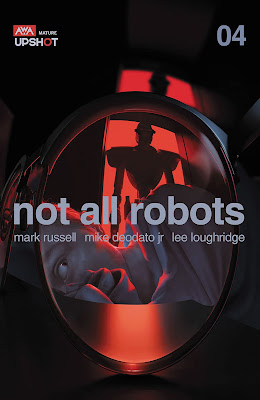 Not All Robots #4 by Mark Russell, Mike Deodato, and Lee Loughridge, published by AWA/Upshot
Few people do dark satire better than Mark Russell, and he is firing on all cylinders on Not All Robots, with artist Mike Deodato and colorist Lee Loughridge. Deodato is a great, inspired choice for this comic. He's a more realistic, less "cartoony" artist than others that have worked with Russell on various projects. This story has a dark air of menace to it, and /Deodato (a veteran superhero artist) brings that real sense of danger and menace to life (wth terrifically grim colors from Lee Loughridge). The robots are here and they're basically in charge, and things are awkward. This is an excellent, darkly funny read. 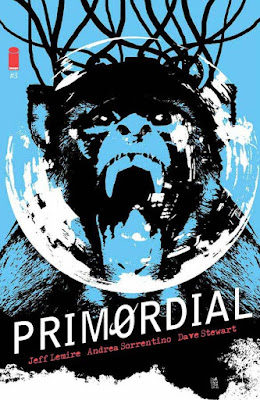 Primordial #3 by Jeff Lemire, Andrea Sorrentino, and Dave Stewart, published by Image Comics
Gideon Falls is one of my favorite comics of the past 5 or so years. That was from the all-star team of writer Jeff Lemire, artist Andrea Sorrentino, and colorist Dave Stewart. Well that story ended, but the great news is that the creative team is back at it with Primordial. This is a dark, alternate tale of the space race. Where after a short while, we stopped sending anything to space because something else was out there. Whatever it is, it has taken Laika the space dog, and two space monkeys aboard its ship. Things are getting pretty weird. The interacting animals gives me a little of a We3 vibe (an amazing story from Morrison and Quitely), and of course there's no shortage of great horror in space. Sorrentino is better than ever. He's really getting super wild in his layouts and storytelling. It's some pretty mind-bending stuff, which is awesome to see. And Stewart is of course a master colorist and does wonderful work in this series, bringing everything to eerie life. 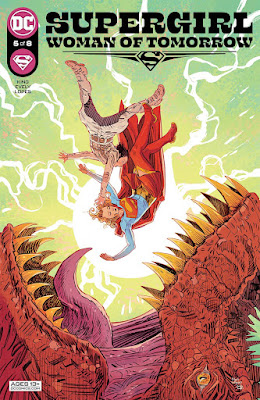 Supergirl: Woman of Tomorrow #5 by Tom King, Biolquis Evely, and Mat Lopes, published by DC Comics
I really love Supergirl: Woman of Tomorrow. I have a full review of the series going up on the site Wednesday, so I don't want to say too much. But I will say that it's a gorgeous, gut-wrenching, heartbreaking series about compassion and vengeance and justice, and how much suffering even a superbeing can take. It's a smart story (from writer Tom King) with great characterization, and the art from Bilquis Evely and colors from Mat Lopes are truly stunning, like "you have to see them to believe them" good. Read this comic.
Panel Patter at 11/16/2021 11:00:00 AM
Share
‹
›
Home
View web version