Welcome to Catch it at the Comic Shop, where the Panel Patter team looks at what's coming out at your favorite store or digital device this week. Each one of us that participates picks up to five items due out this week, with a little bit about why we like them. (NOTE: We use solicitation material for this, so if we miss creators, please talk to your publisher!) Sometimes we might only have a few items to share, other weeks, keeping it to five will make for hard choices. Here's what the team wanted to highlight this week.. 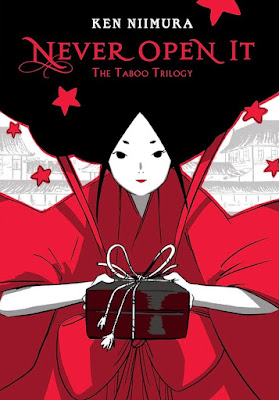 Never Open It: The Taboo Trilogy, art and words Ken Niimura, published by Yen Press
Niimura’s Never Open It was announced by Yen Press in April, I’ve been waiting like a kid on Christmas Eve for the release date and it is finally here. Niimura, who is based in Japan, has won a number of awards, including an Eisner for his work Umami and the Best International Manga award for I Kill Giants, a collaborative work with Joe Kelly. Niimura has a whimsical, lyrical art style which is well suited to his current work, which is a retelling of traditional Japanese folktales. His rendering in Never Open It kind of reminds me of Natsume Ono’s work [House of Five Leaves, Gente]. Folktales in any culture are usually cautionary and moralistic in nature. Niimura twists the retelling of three well known tales by posing the questions: Who decides what is right and what is wrong? Why is certain behaviour considered taboo, and who are the rules meant for? I’m digging the limited pallet of black, white, grey and red. The images on his website from the novel are stunning. 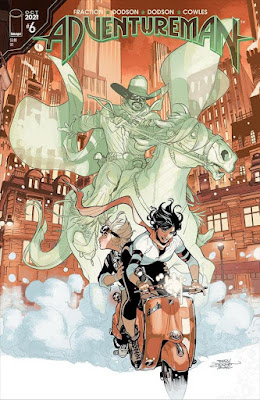 Adventureman #6 by Matt Fraction, Terry Dodson, and Rachel Dodson, published by Image Comics
Adventureman returned not too long ago with an issue wrapping up the first arc. But, much to my delight, there is a NEW issue of Adventureman coming this week! Why am I so excited? This is a series that really is everything I want in a comic book. There's action and adventure, great dialogue, stunningly gorgeous art. And most importantly, a sense of imagination and wonder, like this is a comic where anything can happen. And seriously, the art from Terry and Rachel Dodson is absolutely stunning. It's a world of beautiful architecture and beautiful people, and high stakes action and adventure. 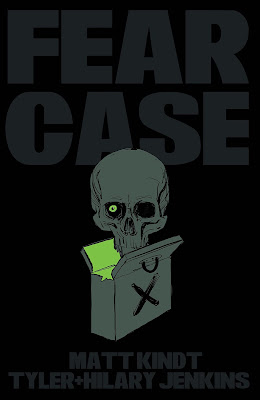 Fear Case TP by Matt Kindt, Tyler Jenkins, and Hilary Jenkins, published by Dark Horse
Fear Case is a good Halloween read. It's a dark, creepy, terrifying story. There's a case that can cause terrible things to happen, that's been around for centuries, possibly millennia. Writer Matt Kindt and the art team of Tyler and Hilary Jenkins bring to life the weird, mysterious world of the Fear Case in this highly engaging 4-issue mini. Apparently the Fear Case is a mystery that the Secret Service has been trying to crack for a very long time. We join a new agent and a veteran as they dig deeper into the mystery of this weird case (and Case). 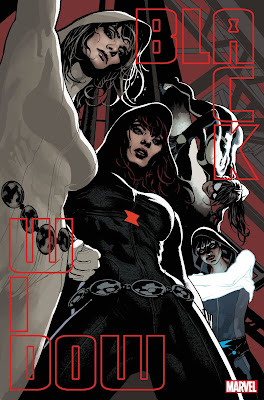 Black Widow #12 by Kelly Thompson and Elena Casagrande, published by Marvel Comics
I've loved the current Black Widow series. Writer Kelly Thompson has Natasha living in San Francisco, as she is dealing with the repercussions of the first arc of this series (where she had amnesia and she believed herself to be married with a son, who actually do exist but are not around right now - it gets confusing). Anyway, now she is out there super-heroing, and trying to do some good. Yelena Belova has been sticking around for a while, which is great, because she's a terrific character. I'm happy that Elena Casagrande is returning on art duties this issue. I've enjoyed all of the art in the series, but Casagrande is doing some next-level work with her action and panel design and gorgeous character work. It's a great book. 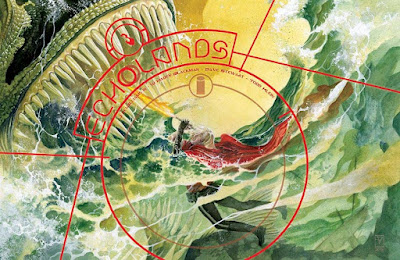 Echolands #3 by J.H. Williams III, Haden Blackman, and Dave Stewart, published by Image Comics
Speaking of gorgeous art, Echolands is an absurdly gorgeous book. J.H. Williams and Dave Stewart are on overdrive with this story, which takes place in a weird, fantastical version of San Francisco which appears to contain people and beings from many different fictional realms. And so many of the different characters are drawn with different art and coloring styles. This book truly is a labor of love, as I can't even imagine the amount of work that goes into every single page. It also reads landscape, which works well with the weird, wonderful world of the story.
Rob's Picks: 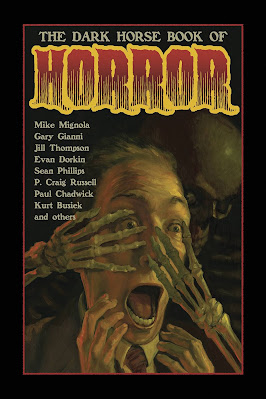 Dark Horse Book of Horror by Mike Mignola, Evan Dorkin, Jill Thompson, Paul Chadwick, Kurt Busiek, Sean Phillips, P. Craig Russell and many, many others, published by Dark Horse
Hellboy shorts! The start of Beasts of Burden! A whole bunch of other hidden gems are included here in this collection of shorter anthologies that I devoured when they first came out. (I'll even link you to one of the old reviews--please forgive how awful it is!) This is a great idea for a reprint, as it's some of the best short-form storytelling I'd seen collected. I'm so glad to see these back in the public eye. 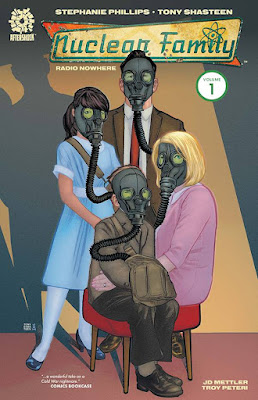 Nuclear Family Volume 1 by Stephanie Phillips, Tony Shasteen, JD Mettler, and Troy Peteri, published by Aftershock
Philip K Dick's ability to blend science fiction into the paranoia of American society is just about second to none. He had more to say in a short story like "Breakfast at Twilight" (on which this is based) than many people can manage across their entire creative life. With Phillips, Shasteen, and company at the helm, Dick's story about the world changing around an ordinary family, while on a different subject of fear, rings incredibly true about our own, current fears--and reactions to those fears. Shasteen keeps the pace moving with a lot of action lines and some truly terrifying depictions. It's a cautionary tale that echoes throughout the decades, from Dick's time to ours. 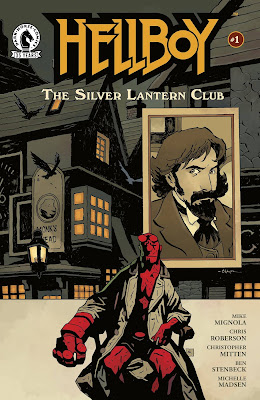 Hellboy: The Silver Lantern Club #1 by Mike Mignola, Chris Roberson, Ben Stenbeck, Christopher Mitten, Michelle Madsen, and Clem Robbins, published by Dark Horse
Speaking of Hellboy, it's always fun to get new stories from a re-invigorated Mike Mignola, working with Panel Pal Chris Roberson and a clever framing devise. Shocking no one, Hellboy is happy to sit down and listen to stories of the Silver Lantern Club told by one of its members and linking some of the pieces of Mignola's ever-expanding universe. This time, the spirits (like almost all my music and probably over half of my comics) have gone electronic, and for people in the early 20th century, that's arguably more terrifying than traditional demons. It's a cool idea, illustrated handily by Mitten, with Stenbeck doing the frame sections.
Panel Patter at 10/26/2021 11:00:00 AM
Share
‹
›
Home
View web version