Halloween Horror: Everyone Should Love the All-Ages Ghoul Next Door 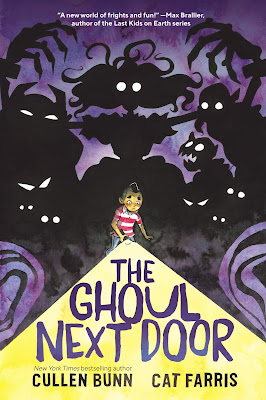 Created by Cullen Bunn and Cat Ferris
Letters by Aditya Bidikar
Published by Harper Collins
9780062896100
Grey lives in Ander's Landing, and it's haunted. At least Grey is pretty sure it's haunted. Turns out he's right, and soon finds he has a stalker of the supernatural kind. And while his phantom friend turns out to be a benevolent ghoul, their relationship is deadly dangerous for Grey. Before long, Grey's caught up in an underworld he never knew existed containing its own private horrors in an awesome collaboration from two creators I've been following for a long time, Cullen Bunn and Cat Ferris.
2021 has been the year of Cullen Bunn, as the man has worked on some awesome stuff this year. He's already almost certainly hitting my favorites list at least once, and his name is all over my short and long list as it stands right now with a few months to go. What's really impressive to me is his versatility as a horror writer. Ghoul Next Door couldn't be more different from Harrow County or Shadowman or Bone Parish, and each of those were unique in their own right.
Part of what makes Bunn so versatile as a creator is his ability to make his protagonist someone you want to care about. We immediately understand Grey; he's a little bit every friend we comics reading types every had combined with a little bit of ourselves, too. At the same time, he's the prototypical Everyman, tossed into some weird, scary crap. But Bunn makes sure he's not a cardboard cutout, using his skills as a writer of some of the best dialog in comics to give his creation life.* All of the characters get a lot of great lines as the story progresses and their bantering back and forth times out perfectly, especially when things go wrong for Grey as he attempts to navigate the worlds. There's definitely some tongue in cheek work going on at times, and while with other writers it falls flat, Bunn's love of the genre always makes it work.
Paired with Ferris, a Helioscope Studios creator (Cat gleefully packs in several cameos of work from her friends were in a great Easter egg), whose artistic style nails the tone here, Bunn is able to combine with her to tell an all ages story that really works for any reader. Ferris's watercolor-like work keeps things from looking too perfect and really sings when it's time to make things shadowy or ominous because of the blending tones. It also means the colors pop a bit more. Her designs on the ghouls themselves are positively creepy. They really look like desperate souls who shuffle their way through life, a pale echo of the living humans they live beneath. With a bit more gore, they could easily live (unlive?) in an adult title, but Ferris ensures she keeps the line balanced just right. 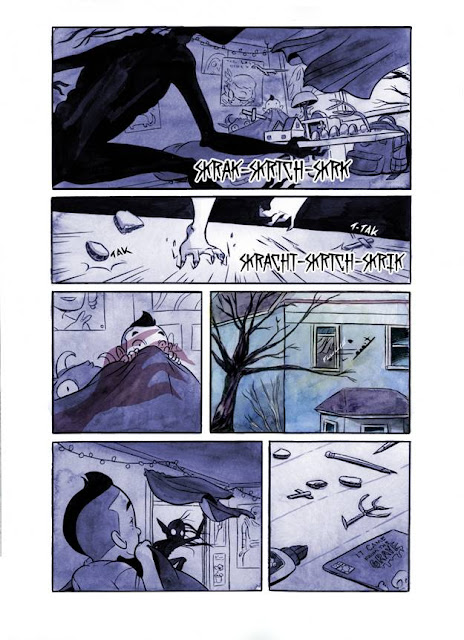 (That being said, some of the scenes with skeletons everywhere might make this a bit too scary for the younger end of the age range, unless they were like me, watching horror movie after horror movie the second my mother fell asleep on the couch. Even I had a few "ooh, that's creepy!" moments when we're down in the land of the dead and the undead.)
Ferris' art on these pages is some of the best of her career. The panel structure is phenomenal, like when the final villain shows up despite Grey's best efforts and looms over everyone or the way she choses to place Grey across the panels, keeping him off-balance and showing his lack of control by not being the center of very many pages. Almost no panel is a straight-on view, not even when we're just hangingout with Grey's family. You can pick up on the vibes of the story from her artistic cues. Bunn is so good as a writer that he can make any artist work for him. But when he's got a collaborator who really understands what he's going for, such as Ferris or Tyler Crook, his work takes on another gear. That's the case here, as the close work between the two shows off on every panel. 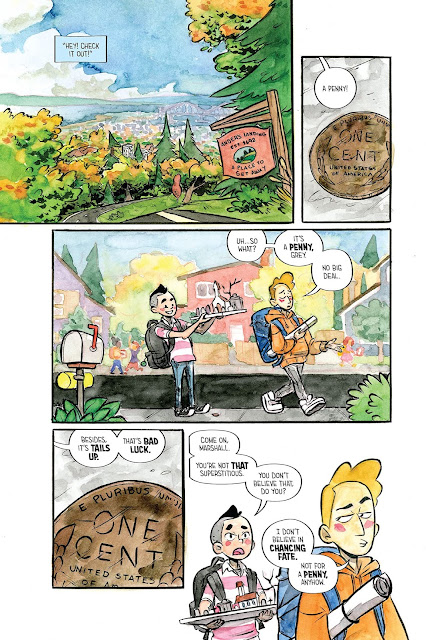 The two do an excellent job of pacing the story and keeping the reader moving from page to page. After setting up that Grey is an ordinary kid with typical kid problems, we move fast into the ghoul making his life a bit harder with her gifts, then the next thing you know, he's in the cemetery with his friend, getting spooked by rats and ending up smack dab in the middle of a world he didn't know existed--and might be better off not ever really knowing, since it looks pretty likely that he's not going to make it out of the world of ghouls with his flesh attached.
That's where this story really works. All-ages books tend to keep the stakes on the lower side because they don't want to upset anyone. The best ones, however, like Ben Hatke's Zita the Spacegirl, ensure that the losses or potentially losses are real, pushing the envelope of what's safe. I won't spoil here what the costs are this time, but they aren't small, and while the ending is happier than an adult horror book, it's not exactly smiles all around, either.
Switching easily from the human world to that of the ghouls, Ferris keeps things grounded visually while Bidikar's lettering makes Bunn's lines of dialogue crisp and easy to read, working with the art to lead the reader's eyes down the page. If Ferris shows Grey going down a staircase or trailing off into another room, Bidikar places the balloons accordingly. That's the kind of thing that makes the difference between a good letterer and a great one and helps make a book even better.
The Ghoul Next Door is a perfect book for the season, but is also a great gift for that younger reader in your life who can't get enough scary things, especially if they keep trying to use your Shudder account after you drift off to bed. It's a great story with great art--and, if the Ouija Board I used the other day is correct (or maybe it was Twitter, they're about equally as dangerous to your eternal soul), I think we'll be seeing more Grey and his world soon. I can't wait!
*Yeah, that's a gratuitous reference. Deal with it.
Rob McMonigal at 10/21/2021 11:00:00 AM
Share
‹
›
Home
View web version