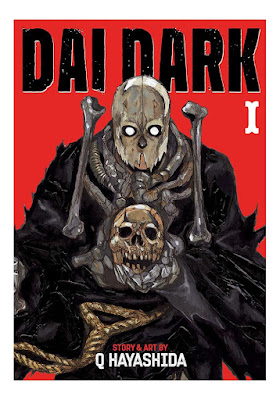 Dai Dark Volume 1
by Q Hayashida
Published by Seven Seas
A young man is cursed to have special bones, but the bright side is that he can utilize powerful dark powers to keep people at bay who literally want to skin him alive and get to the treasure inside.
It's irreverent as all hell, completely over the top, and just a plain old murderfest.
Surprising absolutely no one, I loved it.
I make no bones, as it were, about my love of stories that are, above all, fun. From start to finish, this opening volume is all about the joy to be had in following this guy who can do just about anything he wishes to defend himself and rips people's skeletons out when he's finished. We aren't discussing the morality of killing, the trauma of the experience, or anything like that. That's for a different comic. It might get a few pages or panels, but the focus here is on how much murder we can fit per chapter, ramping up the violence as we go along.
Hayashida's art is great for this. There's lots of details within the gore, too. Sometimes a book like this gets very sloppy with the linework. The creator will use blood and flying body parts to cover up the fact that they didn't really establish any strong perspective or intricate details and people's shapes are left unfinished. Backgrounds turn into nothing but action lines. Even if you like the story, you might want to Bleach your eyes at times.*
That's not the case here. Among the punches, evil axes, and various other ways to kill people, Hayashida finds a way to make everything look so intricate that it could be an artistic work that people would write reams of paper about. Given the subject matter, it's a little less likely to get that kind of ink, but it's deserved. The thin, scratchy but not scribbled lines make all the skeletons, ghouls and death's head imagery that Q uses really pop. 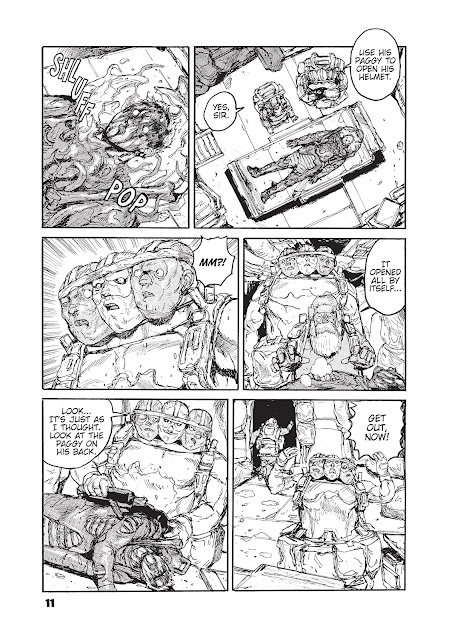 This is a series that opens with a 3-headed space pirate captain. You know you're in for some zany shit, which as I said is the biggest draw for me. But look at how each head is slightly different. Notice the detailing on the dead(?) spaceman they're investigating. Check out the framing of each panel. There's a lot going on here, and this is just early on. A later spread is nothing but slayed skeletons, arranged so that the reader's eye gets to see the pattern, the details, and the sheer carnage. Despite the premise, Dai Dark is very creative artistically, just like a well-directed slasher flick. Hell, I liked the black and white art so much, I actually preferred it to the color openings. (Sorry, I know they're expensive to reproduce!)
There's so much to enjoy here, if it's your thing to enjoy items like a death monster who only kills in round numbers, gloriously expounding upon it as it rips people apart. That's pure poetry for me! Another character announces how they'll murder you, including "death by poking."
Dai Dark, as I said above, isn't for everyone. But if you enjoy incredibly tightly drawn mass murder, make sure you buy this book. It's a clinic on how to do a great gorefest!
*I kid because I love. Well, until I eventually gave up on the meandering story...
Rob McMonigal at 10/18/2021 11:00:00 AM
Share
‹
›
Home
View web version