Destroying Monsters is Engaging Work: Catch It's for October 20th, 2021

Welcome to Catch it at the Comic Shop, where the Panel Patter team looks at what's coming out at your favorite store or digital device this week. Each one of us that participates picks up to five items due out this week, with a little bit about why we like them. (NOTE: We use solicitation material for this, so if we miss creators, please talk to your publisher!) Sometimes we might only have a few items to share, other weeks, keeping it to five will make for hard choices. Here's what the team wanted to highlight this week.. 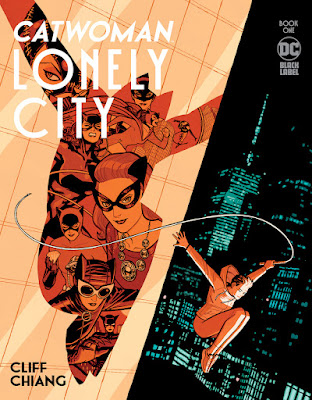 Cliff Chiang is one of those artists where I will check out literally anything he does. His work is that compelling and meaningful to me. Chiang has a gorgeous, distinct style that is incredibly accessible and inviting. The closest parallels I can think of is a slightly-more Manga influenced Fiona Staples (so, incredibly high praise). His work on Wonder Woman, and even more so on Paper Girls, was absolutely legendary. Not surprisingly then, I’m so excited for this series. It’s Cliff Chiang writing *and* drawing, which is all I need to know. The story is about Catwoman, and appears to involve an older Catwoman. What I’ve seen so far looks amazing, and I’m thrilled to see Chiang make his debut as a writer. He’s an incredible visual storyteller, so I have no doubt that this will be excellent. 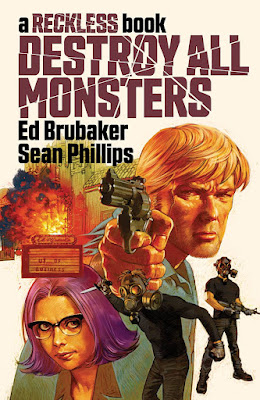 Speaking of books I have no doubt will excellent, the third “Reckless” book from excellent writer Ed Brubaker and the incomparable Sean Phillips (on art) comes out this week, with colors by Jacob Phillips (a talented artist in his own right). I’ve really enjoyed the first two books in this series. They are a series of stories involving Ethan Reckless (fantastic name) who solves problems for other people and deals with problems and baggage from his own life and history. I love all of the stories set in the “Criminal” Universe, but I’m also glad that Phillips and Brubaker are trying to tell different sorts of stories as well. This is also a crime story, but it has a different feel to it than “Criminal” stories. Ethan has a dark past, but he isn’t quite as much one of their classic doomed protagonists. The art is unsurprisingly gorgeous, with the seedy 80’s LA setting brought to vivid life. If you enjoy crime stories, or, you know, stories, you should be reading this book. 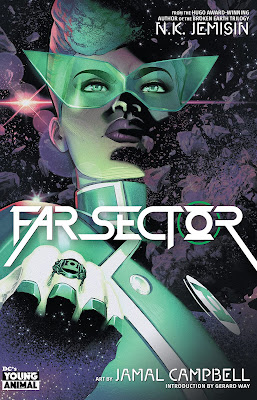 Far Sector is an excellent sci-fi series set in the DC universe, but only nominally. It involves a city with a billion people, and a murder investigation conducted by a Green Lantern from Earth. I started this series and really enjoyed it, but decided I’d rather read it once it’s collected. It’s a really smart, intriguing murder mystery set in a location that is as alien to the lead character as it is to us. Jemisin is an award-winning sci-fi writer, and while I haven’t read her books, she’s clearly an incredibly talented writer, telling a complex, layered story. The art from Jamal Campbell is absolutely stunning. Really, he’s doing incredible work here. And the great news is that you really don’t need any familiarity with the current state of the DC universe in order to enjoy this story. 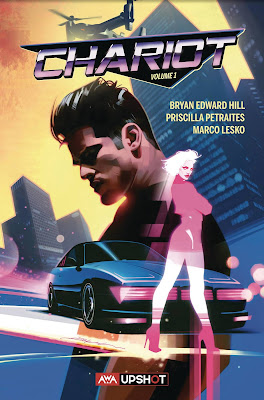 Put on some Vangelis, Eurythmics, or Depeche Mode, and journey with me into the land of Chariot. This series (a super fun story from Bryan Edward Hill) mostly takes place in the present day, but it evokes the style and feel of the 1980’s, with beautiful women, stylish cars, and just the right artistic touches. There’s a hyper-intelligent car that basically has someone’s consciousness inside of it, and it’s an amazing car that can do remarkable things. And it’s found by a guy that’s down on his luck. And…all sorts of adventures ensue. This story (with terrific, stylish art from Priscilla Petraites and colors by Marco Lesko) feels like an 80’s B-movie, in the best possible way. The creative team really channels the whole synth pop vibe in a fun and engaging story. So grab your aviator glasses and your pastel suit jacket with the sleeves rolled up, and check out Chariot. 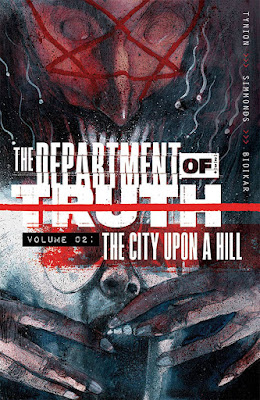 Department of Truth is a big, ambitious, popular series that, as far as I’m concerned, lives up to all of the hype (my review here). Writer James Tyrion is really interrogating the concepts of truth, media, belief, and ideas in this story. In this endeavor he has remarkable artistic partners in Martin Simmonds, letterer Aditya Bidikar, and designer Dylan Todd. Simmonds is doing career-defining work in this book (though I will not be surprised when he goes on to even greater heights). His art is weird and jagged and unsettling, along with just being remarkable storytelling. There have been some talented guest artists as well (like Elsa Charretier), which have made this book a real treat to read. A weird, mind-bending treat, but delightful nonetheless. 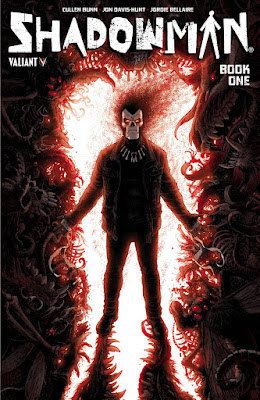 Shadowman Vol 1 TP by Cullen Bunn, John Davis-Hunt, Jordie Bellaire, and Clayton Cowles, published by Valiant
Sometimes it takes a monster to kill a bigger monster. At least that's what Jack hopes. He uses his ties to the Loa to try and find a way to keep the horrors he encounters daily from ripping humanity apart. Things are getting really strange, though, as now the manipulative Baron is supposedly helping him, but that Loa has an agenda all his own. After being battered by seemingly every spirit imaginable, some of whom think they're doing what's best, Jack is faced with the knowledge that maybe, just maybe, he's been going about things the wrong way all along. It's a total mind-messing masterpiece, with Bunn delighting in pretending the Baron is telling this story, not him in the classic EC horror style. Meanwhile Davis-Hunt and Bellaire just kill the art here. They're a killer combo that easily shift between the mundane world and Jack's world of Loas. It's terrifying beauty that makes Bunn's script sing. 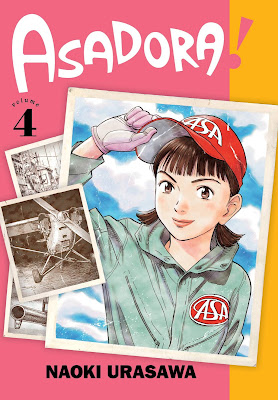 Asadora Volume 4 by Naoki Urasawa, published by Viz
It took me awhile to get my hands on Asadora, and boy was it ever worth the wait! Continuing the theme of monsters, Asa tries to keep her life moving, even tagging along with a friend to go to an audition, which is never any fun for the person who isn't reading lines. But that strange creature whose footprint devastated her world won't let go, and with a new sighting and new possibilities, she's off and running to try and stop it once and for all--if she can. When you decide to read Urasawa, you have to be in it for the long haul, as he sets up a mystery page by page. This is really getting good and I can't wait to see where it goes, with engaging, flawed characters and art that's extremely distinctive. It's definitely in the Japanese style, but there's elements of Buscema in there, too. 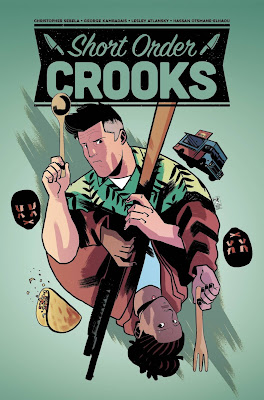 Short Order Crooks by Christopher Sebela, George Kambadais, Lesley Atlansky, and Hassan Otsmane-Elhaou, published by Oni Press
Rock runs a food cart, but he's struggling. When the people who control the Portland food cart scene put the screws to him, he's faced with moving from criminal markups to being a criminal, with his new assistant Harper dragged along for the ride even as she tries to make Rock's food more Hipster Portland friendly. Not going to lie, I think this one shines a bit more if you live in Portland, where food carts are bigger than anywhere else I've ever lived. But Sebela's comedic timing that mixes with dead serious crime works for anyone, and Kambadis's linework is always good to see. Order a few street tacos and pull this one off the shelves.
Kelli's Pick: 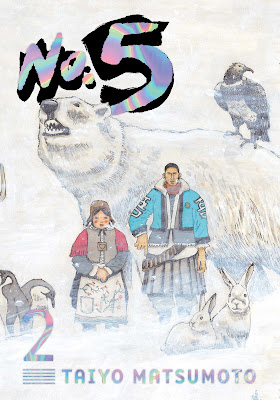 No. 5, art & words Taiyo Matsumoto. Published by Viz Media
We get a bit of backstory with volume 2, which is great, because this story is incredibly confusing. I would describe the plot as nebulous, so nebulous in fact one could ask, is there a plot? Basically there are a bunch of super humans, who appear to have been created by an organization that has yet to be named. They were part of the military, but now that the world is essentially at peace, they have lost their purpose. One member of this group, No.5 has gone rogue, kidnapping a girl and killing anyone who comes near them, including his former team members. As the story continues in this second instalment, No.4, a pair psychic twins attempt to dissuade No.5 from continuing on his journey with the kidnapped Matryoshka. They enter his mind pulling him into an alternate reality. This volume also digs into the past of other team members, including No.1 the team leader, and colonel Victor and Nazarov. As confusing as it all is, there is something about the story that just sucks you in. I am still along for the ride, even if it is a little meandering.
Panel Patter at 10/19/2021 11:00:00 AM
Share
‹
›
Home
View web version