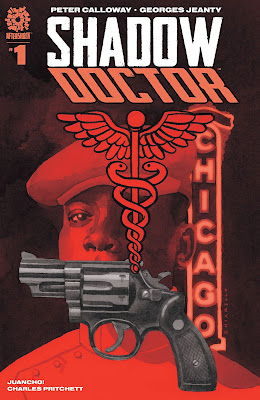 Shadow Doctor, is based on the true story of writer Peter Calloway’s grandfather Nathaniel Calloway. Nathaniel is a Black man who worked with the mob in Chicago during Prohibition and the Great Depression. Nathaniel is narrating his story from his hospital bed in 1979 to his son David. After surviving an ambush while helping to run whiskey, Nathaniel vows to go to medical school and become a doctor so that he might make a better life for himself. The problem is no hospital would hire him and no bank would loan him money to start a clinic. There’s no question that this is because he’s Black. The hiring managers and loan officers, each of whom is a white man, tell Nathaniel that it isn’t personal, they’re just following the rules. Eventually, it becomes clear to him that his only chance is to turn to the mob for help. 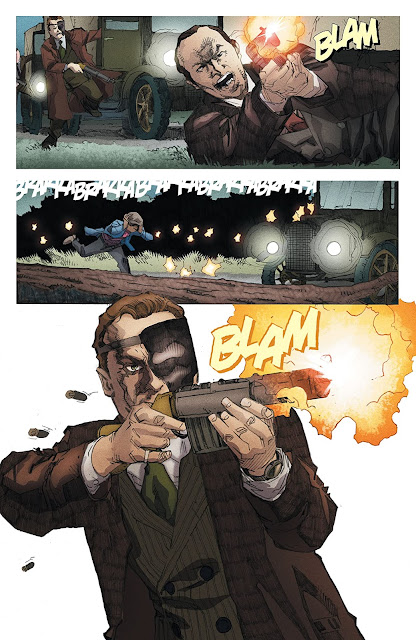 While Nathaniel is depicted as determined, brave, and smart, Peter Calloway avoids lionizing his grandfather by showing that Nathaniel was willing to do some morally gray things in order to realize his dream. As Nathaniel explains to his son, “Most decisions are quiet things, born of an idea, a moment of contemplation. But the ones born from desperation—they aren’t quiet things.” That sense of desperation permeates each page set in the ’20s and ’30s.

The art has a watercolor feel to it and Georges Jeanty is able to convey the different eras quickly and effectively. This isn’t surprising since Jeanty worked on The American Way, which was set in the 1960s. The characters’ expressions in particular are well done, conveying both Nathaniel’s determination and desperation as well as the bigotry of many of the white characters, some of whom have no problem letting Nathaniel know that their horrific treatment of him is personal. Jeanty’s use of light and shadows in the scenes of Depression-struck Chicago are particular stirring. Juancho!’s muted color palate and red-tinged sky help draw the reader in. This is a series that I plan to continue reading.