The Carelessness of Desire- a look at K. Woodman-Maynard's The Great Gatsby 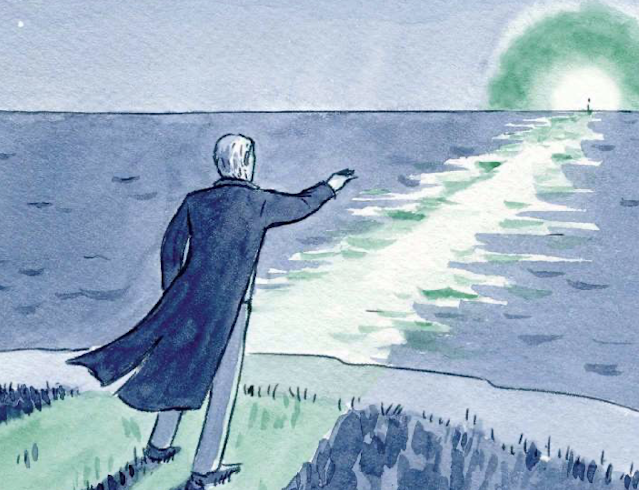 Too often, The Great Gatsby gets reduced to the realms of English term papers and students trying to wrestle with lives that they have yet to live.  The green lights of East Egg or the billboard eyes of Doctor T.J. Eckleburg become what we take out of the book because those are the surface and easy parts of the mystery of Gatsby, Daisy, Tom, Nick, and Jordan.  So many school-day essays have been written trying to glean some insight into these characters through these artifacts of F. Scott Fitzgerald’s original novel.  It’s the New York City around these characters that Fitzgerald depicted which becomes an extension of the characters and their states.  The green light “means” something because it means something to Gatsby.  The eyes on an optometrist’s billboard “mean” something because it means something to NIck as he sees the billboard on a train trip into the city, watching over the actions of all of these people.  So it is these symbols in the book that we remember because we had to decipher them, make guesses about what they could mean, and then get graded on those guesses.  We were asked falsely to put ourselves in Fitzgerald’s position, trying to his intentions behind these symbols and the book’s meaning instead of listening to it, listening to these characters, and trying to hear what they were trying to tell us about love, about desire, and about carelessness.

In adapting this almost 100-year old novel, cartoonist K. Woodman-Maynard includes most of the details of Fitzgerald’s novel but her adaptation regrounds the story in the characters.  She allows the characters to reclaim the importance of this narrative over the symbolism of it.  By making The Great Gatsby a visual story, she takes the original text and makes it a more immersive experience. Her cartooning restores the vibrancy of this story, a vibrancy that became somewhat tarnished and staid after decades of scholarship and other adaptations (mostly cinematic) that never quite captured the spirit of the novel.  The Great Gatsby has become a symbol of some historical jazz age and the character have morphed into its avatars instead of existing as living, breathing characters who speak to us now as they did to their original audience.

So this story about love (and maybe that should be “desire” instead of “love’) in the time of jazz and parties shows it not as a kind, benevolent force but as a destructive storm.  It begins innocently enough, as midwestern Nick moves to New York City, more specifically Long Island, to begin a job of numbers and finance. It’s a safe choice for a man of his age and his background  It’s the beginning of summer and its long night which allows Nick’s neighbor to throw even longer parties.  In Long Island, he finds old acquaintances- his school chum Tom and Tom’s wife Daisy (who’s also Nick’s second cousin.)  The should be a connection to Nick’s past, a continuation of it but Nick calls them “old friends whom I scarcely knew at all.”  They’re a part of his past but a tenuous one.  Tom is more than a bit of a jock, a bully, and a racist.  Daisy, the wife, and the cousin, is a flighty personality, both in love and not in love with her husband. These aren’t people that Nick sought out and they were not looking for him.  It is fate and circumstance that brought them together. 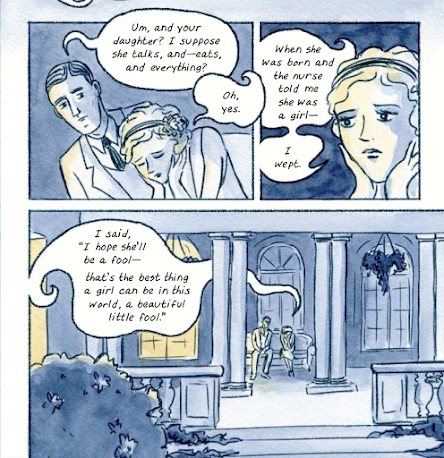 For a love story, The Great Gatsby spends a lot of time with characters who are both in love and not in love with one another. Nick’s neighbor, the titular Jay Gatsby is a man from Daisy’s past well before she met Tom, and the two of them had the greatest love of all time.  Or at least that’s how they both want it to be.  As you look at what these characters are doing and what they’re saying, the story becomes about trying to force these things, to try to impose our will on something as almost random as falling in love with a person.  Love makes all of these characters careless and that’s what brings all of these people together; their carelessness and unintentional meanness that comes out of infatuation.  The Great Gatsby is definitely not a book to model any kind of healthy relationship on. Fitzgerald seems suspicious of “true love” in this book, instead showing these people treating it as something that they have control over instead of the desire that totally consumes their lives.

K. Woodman-Maynard bathes this story in these lightly applied watercolors.  The beginning is bright and lively, like an early summer lazy day.  Sunlight glimmers through the atmosphere in her paintings.  This seems like a dreamlike world full of potential and possibility.  The art invites us into this seemingly endless and carefree summer.  Fitzgerald’s novel practically defined the jazz age but what Woodman-Maynard gives it is a warmth of these days and nights where you can begin to believe that these characters are bigger than life.  Even the way that Woodman-Maynard weaves the words into the visuals, whether it’s Daisy’s lilting dialogue or the exposition that finds nooks and crevices to be in, she imbues an airiness into the story.

Gatsby is the personification of this airiness but also the corrupting agent in it.  If it wasn’t for Gatsby, Nick could have had a nice, flirty summer with his old chums and their friends.  It could have been a taste of the good life for Nick instead of what it turned out to be.  But Gatsby, for all of his pretentiousness and his “old sport” affectations, is the person who doesn’t really belong in this world.  Gatsby is such a product of what he thinks that Daisy wants that all his big, empty mansion becomes the perfect symbol for him (see, there is more symbolism-- right up there with the green lights and eyes on a billboard.)  Gatsby has created this life, this wealth, this artifice in the hopes of giving Daisy what he thinks she wants but his understanding of her is only a surface-level and shallow reading of her that demonstrates just how little he understands her or other people. 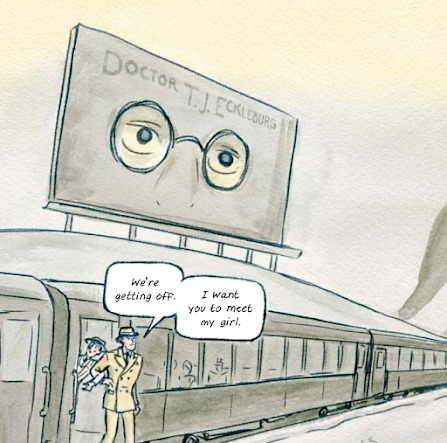 Even though Nick and Jordan are carrying on some kind of affair, Daisy is the center of these mens’ lives.  Through Daisy, Tom, Nick, and Gatsby are brought together on this collision course, where each of them has their own unhealthy infatuation with Daisy.  She is the center who cannot hold the weight of this summer together.  There’s her marriage, her daughter (unceremoniously mentioned and then forgotten by the characters and the book,) and her own inability to be able to have any kind of agency in her story.  She is perfectly content with the life of being Tom’s wife until Gatsby shows up again, unbalancing this precarious little domestic life that Daisy thinks she has.  Her innocence in this story only goes so far, having this choice thrust upon her instead of it being a choice that she accepts.  But her inability to decide turns into one of the greatest sins in the book.

Bringing out a deeper reading of these characters in The Great Gatsby, K. Woodman-Maynard takes this story of life 100 years ago (just think about that for a minute-- the novel originally came out in 19245!) and shows the timelessness of it.  This doesn’t read like a story of our great-grandparents and great-great-grandparents lost years.  Maybe it says something about our society that people’s carelessness of 2021 is the same carelessness of 1925 but Woodman-Maynard’s concentration on how these characters interact shows us how this recklessness in relationships is such a part of us.  Fitzgerald recognized this when he wrote the novel and Woodman-Maynard gives it a renewed life in her adaptation.  So much of who we are today is still defined by the early 20th century.  Fitzgerald was a prophet of his age that way. 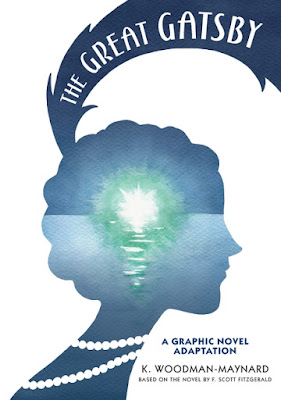 The Great Gatsby
Written and Drawn by K. Woodman-Maynard
Based on the novel by F. Scott Fitzgerald
Published by Candlewick Press
Scott Cederlund at 2/22/2021 09:00:00 AM
Share
‹
›
Home
View web version