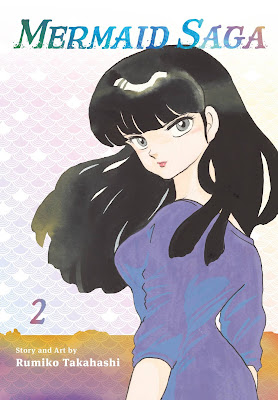 Takahashi fans rejoice. Viz has reissued Rumiko Takahashi’s Mermaid Saga and volume 2 drops this week. Fans of Takahashi might be surprised to discover that she wrote a horror manga; actually she wrote two. A year before writing Mermaid Saga, she penned the one shot The Laughing Target, a short story about the doomed arranged marriage between two cousins. Takahashi is probably best known in the West for her series InuYasha and Ranma 1/2. They are sprawling epics that span over 56 & 38 tankōbon volumes respectively. Both series are representative of what she is best known for, historic fantasy and romantic comedy. Mermaid Saga is neither of these. There is a hint of her humour in the banter between the characters at times, but overall it is darker and more somber than her other long form works.

Mermaid Saga originally ran from 1984-1994 in weekly Shonen Sunday. It is the story of a young man who consumes the flesh of a mermaid and is blessed/cursed with immortality. Viz tags it as horror, but it might be more accurate to describe it as a study in depravity. Mermaid Saga is filled with ruthless people. A man so obsessed with a woman that he kills her, resurrects her with mermaid ash and keeps her as mindless doll locked away on his estate. There is a woman who uses the mermaid’s flesh to punish her twin sister. Then there are the mermaids themselves, who sacrifice their own in order to keep human form. Many brutally kill to obtain this elixir of immortality, but transformation into an immortal is not always guaranteed. It’s a high odds gamble, more often than not the person who consumes the flesh of a mermaid becomes a disfigured, mindless, immortal monster. 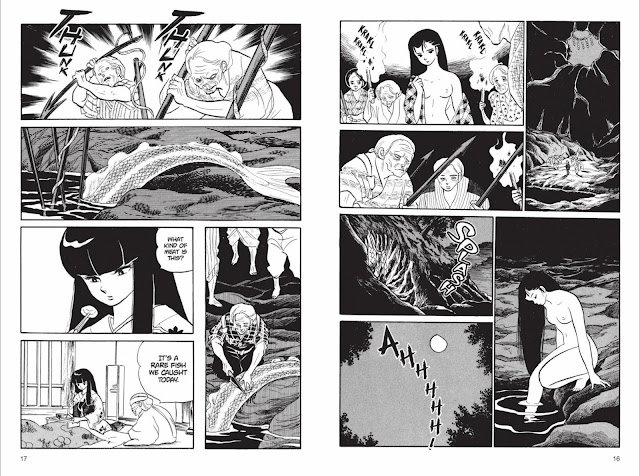 The story opens with Yuta who is looking for a mermaid to break his spell of immortality. He ate a piece of mermaid’s flesh his friend brought him one day, because hey, why not? He’s been looking for a mermaid ever since, hoping that finding one will end his curse of immortality. We find out early on that this isn’t possible. Yet he continues to wander Japan with Mana, a young woman he saves, in tow looking for mermaids. Yuta’s only ambition is to be able to grow old and die. To live the life of a normal human. He’s been alive for 500 years and has been killed multiple times. Each death and resurrection painful. Mana’s motive for following Yuta is a little unclear. She’s been in chains her entire life, unable to walk, bred to be sacrificed in a cannibalistic ritual. She declares in the first story that she intends to live, even if it is as an immortal. She struggles to survive despite being woefully equipped to defend herself as she is threaten with mutilation, rape, and death. 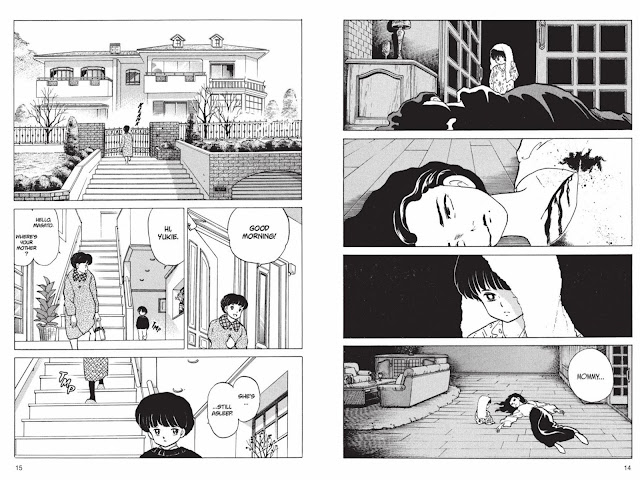 It will be interesting to see where Takahashi will take the story in the final book of the series. It opens with a graphic aftermath of a suicide. Or is it murder? We follow a strangely calm child as he moves around the body of his mother, cleaning blood and glass off the floor. The blood cleared away, and the child freshly showered, he returns to the room and sits to stare into the eyes of his dead mother.

The story jumps between modern Japan and ancient Japan as we follow Yuta on his 500 year long quest to find living mermaids. It can feel a little episodic and it is difficult to see to the element that ties each arc together other than Yuta himself. A deeper plot might be revealed in volume 2, but even if the story continues to be a loosely connect series of events, it’ll still be an entertaining ride. 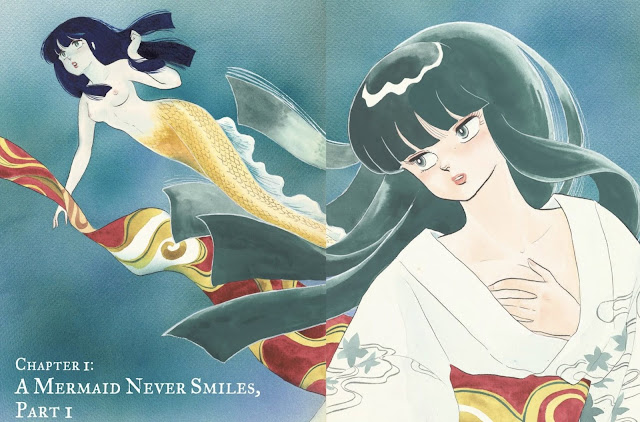 The Viz collector edition of Mermaid Saga comes in a large trim format and has 12 colour pages. The colour pages are beautiful reproductions of Takahashi’s watercolours for the series. You can even see the grain of the watercolour paper on some of the pages. The art is typical Takahashi, with that trademark late 80s early 90s aesthetic. You know it, that high puffy hair, rendered in flat black, with little to no highlights. Snubbed nosed, heart shaped faces. I have never seen Takahashi at work, but you can tell that she uses brushes as well as nib-pens to ink her panels. At times the people populating the manga can suffer from same face. That phenomenon where the mangaka seems to draw the same face but with a different hair style and outfit to help differentiate characters. It is, however, a pleasure to watch the range of emotions that cross these faces. With a few pen stokes she can covey anger, fear, remorse, desire, apathy, joy and longing. Takahashi isn’t heavy handed with screentone. She actually uses quite a bit of line work to shade and create texture. This helps keeps her action sequences light and easy to follow.
Takahashi fans will definitely want to pick up this edition of Mermaid Saga, it’s a beautiful reissue.  The first English translation was flipped so that it read left to right, Viz has released this edition in it’s original right to left orientation. If you are new to Takahashi this could be the perfect series to start with. It is pretty short when compared to her other works, and although it lacks her brand of wacky humour, it’ll still give you a taste of her fantastical style of story telling.

As a side note if you are interested in reading any of Takahashi’s one shot manga they have been collected into three volumes called Rumic World Trilogy. Kind of hard to find but perhaps worth it if you would like to check out stories like The Laughing Target and Fire Tripper.
Kelli Ewing at 2/17/2021 09:12:00 AM
Share
‹
›
Home
View web version