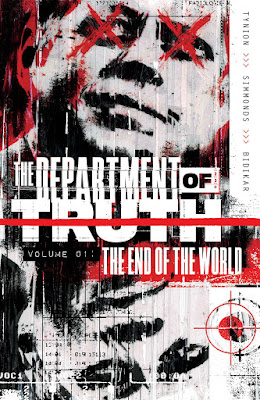 Department of Truth feels like a comic that has captured the zeitgeist better than just about anything else right now, and it's a book I absolutely love (my full review here).  The idea behind the comic is that belief influences reality in a tangible, meaningful way, and that belief can be manipulated in order to change reality. This is causing conspiracies to come true.  the Department of Truth is a government agency that is tasked with keeping reality real.  It's a really smart, intense, engaging book, that's not always an easy read because of the subject matter.  I absolutely loved this book, and so much of that comes from the stunning, next-level work done by Martin Simmonds on art and Aditya Bidikar on letters. I've always enjoyed Simmonds' work but his pages in Department of Truth are a revelation. 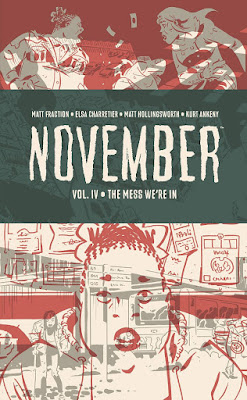 November Vol. 4 HC by Matt Fraction, Elsa Charretier, Matt Hollingsworth, Kurt Ankeny, published by Image Comics
This is the fourth and concluding volume of the November series of hardcover crime stories.  It's all one big excellent story (Matt Fraction at his best, telling very human stories), and it should presumably come together with a bang in this final volume.  I've loved the prior volumes (review here) and I'm sure that this fantastic creative team will stick the landing.  This is a series of intersecting stories of people who are lonely and scared and desperate, and all of them intersect in meaningful and surprising ways. Else Charretier is absolutely amazing on art; she conjures a classic noir feel in a relatively modern setting, and is beautifully colored with wonderful atmospheric work from Matt Hollingsworth. The hand-lettering from Kurt Ankeny is also first rate.
Sean's Picks: 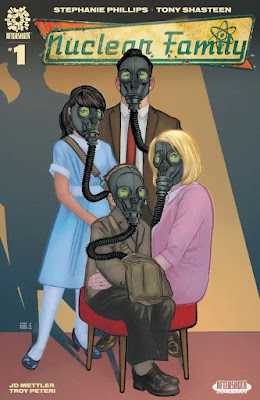 I always look forward to new titles from Aftershock. They seem to have a good formula for quality stories that oftentimes involve something traumatic or downright scary AF. This one in particular first piqued my interest by being written by Stephanie Phillips. Her work lately has been noteworthy and I would be doing everyone disservice to not say something to that fact. Put those thoughts with the amazing talents of Tony Shasteen on illustrations about a story based on a Phillip K. Dick short story and I’m hands-to-the-sky all-in. Premise: it’s after the Cold War and dynamics are tested with a Korean War vet and his family as a nuclear attack erupts on US soil. This ultimately causes everyday life to be forced underground, living among the bunkers trying to survive an unending nuclear war. I am totally onboard for this one! 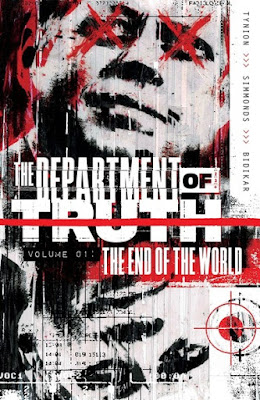 The first arc to a story so dense that without chewing long enough on each page you may choke on it’s premise. Truth’s are subjective and conspiracy is omnipresent in a story that is scary good and flat out horrifying with how timely it’s existence is. References to Qanon and real world conspiracies drive the narrative through a story that makes true what we’ve all been terrified of entertaining this whole time: What if a collective thought, no matter how untrue, could shape the perceived existence of actual real life? That’s the take here. That’s the massive undertaking that this creative team are doing here (and who are all literally at the top of their games). Strap in folks, this is gonna be one hell of a wild ride and I see this mindfuck of the fiction to a non-fictional foundation lasting for quite some time. 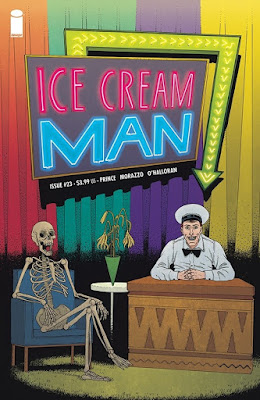 By now I must seem like a broken record. Ice Cream Man is one of the best books out there right now. Each issue needn’t be read with having any preconceived knowledge of the rest, but having read them in sequential order you’ll be best suited as sitting down as these stories have no rest for the weary. Just when we may have figured out the format and stylistic delivery that Maxwell and Morazzo have perfected, they go and turn their own format upside down, throwing it to us completely sideways. The 23rd issue, out this week, won’t be one for everyone. It’s not a traditional comic in the sense of what it means to be traditional in an industry of word bubbles and thought balloons, but this issue will absolutely have longstanding fans of the series stand up to their feet and say “hell yes!” because it takes storytelling to a new height. Mixing prose with splash pages and casting playwrights would have pissed me right off if you were to tell me that were to be the format of a comic out soon. Grab ICM23, open it up, digest it’s contents, and then I’ll slap myself stupid for knocking it before I tried it. 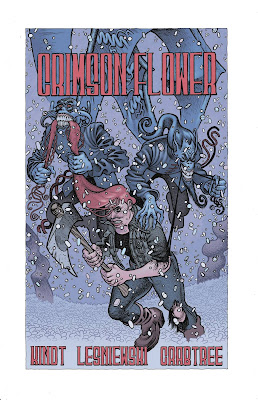 The first issue of this new collaboration of Kindt with rising star Matt Lesniewski was a hit as far as I’m concerned. Kindt is peak Kindt right now, and Lesniewski is next-level with his linework and illustrative creativity. A folkloric sequence of events unfold as it tells a story alongside another. Telling a story to tell another one sounds awkward and, frankly, pretentious, but Kindt finding his own way to deliver it is both palatable and enjoyable. Like the ones before this one, grab this Kindt miniseries and enjoy the ride. 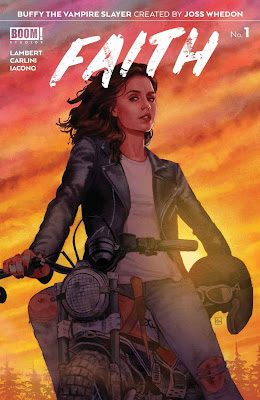 Buffy the Vampire Slayer: Faith #1, by Jordie Bellaire, Eleonora Carlini, Kevin Wada, Joe Quinones, Dani Strips, published by Boom! Studios
Because of recent news that has come to light about Joss Whedon, like many Buffyverse fans I’ve been reexamining how I feel about the shows he created. Yes, certain aspects of Whedon franchises that I always found somewhat troublesome (I’m lookin’ at you, Connor and Cordelia in season 4 of Angel and just about everything in Dollhouse) feel even more icky now. But just as Harry, Hermione and Ron now belong to the world and not J.K. Rowling, so too do the slayers belong to the fans. So far, the recent comics from Boom! have done a fantastic job of re-imaging them for a new generation. In this one-shot, we’re promised the origin of Faith as a slayer. We’ve seen inklings that she might not follow the same moral code as Buffy, and I look forward to where this issue will take her. 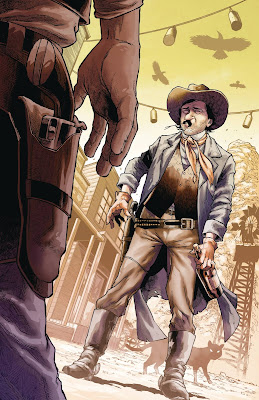 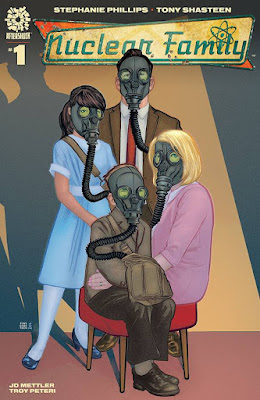 Nuclear Family #1 by Stephanie Phillips, Tony Shasteen, JD Mettler and Troy Peteri, published by Aftershock
What if the bomb actually goes off in the 1950s? Tim McLean must find a way to help his family deal with their most feared reality while experiencing literal philosophical questions about what really constitutes living. Given that we're living through a new wave of Cold War-era paranoia where anything we dislike or distrust is a Russian Operation (or fill in your most feared country here), this story about the potential horror of a USA-USSR conflict by Philip K. Dick, one of my favorite prose writers, gets a comic adaptation from one of my favorite comic writers, Stephanie Phillips. Aftershock's model of short, five-issue series should work well for this, and I look forward to seeing how Shasteen and Mettler portray the bleak future outlined by Dick, and how Phillips gives the family a little more room to breathe and exist as characters versus the limits of a short story. 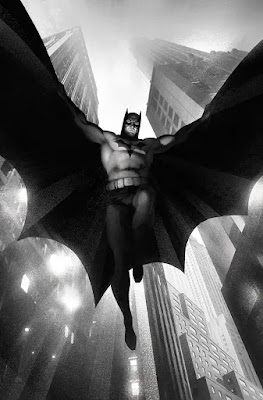 Batman Black and White #3 by Tim Seeley, Kelley Jones, Nick Dragotta, Bilquis Evely, Olivier Copel, and others, published by DC Comics
Yet another issue of this periodically reoccurring anthology that's jam-packed with creators I really dig. The lede here for me is Seeley and Jones working together on a new horror-themed look at the Legend of the Dark Knight. Jones just keeps getting better as a storyteller and Seeley's style of horror matches mine almost perfectly. Cursed to be forever haunted by Batman, eh? Can't wait to see how that plays out. Plus, Nick Dragotta, one of Hickman's best collaborators, gets Mecha, and Bilquis Evely brings Bats back to medieval times, which is always fun no matter who writes it. This series just knocks it out of the park, issue in and issue out. 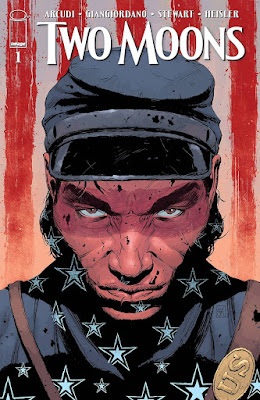 Two Moons #1 by John Arcudi, Valerio Giangiordano, Dave Stewart, and Michael Heisler, published by Image
In the thick of the Civil War, a Native American starts to see supernatural visions that make him question his sanity. When the bullets start flying, a crucial decision changes the life of Virgil Morris, putting more than just the Devil at the his heels in a new series that gets off to a strong start. I'd be lying if I didn't suspect that the original plan for this was to make it integrated into the Hellboy Universe, given Arcudi's long-running partnership with Mignola, and some of the way it's structured definitely shows the links between the two creators. But it's a really cool idea (what if you could see supernatural evil within your own ranks?) and at least so far, Arcudi seems to be respectful of the source material he's used to create the world. (Again, no surprise there.) Giangiordano's art does a great job of showing the chaos of battle and realistic wounds, and he juggles panel construction well. I'm looking forward to seeing where this one goes and anyone who likes historical horror should definitely check it out.
Panel Patter at 2/23/2021 08:30:00 AM
Share
‹
›
Home
View web version