Around the Timestream in 180 Pages: Backtrack from Oni Press 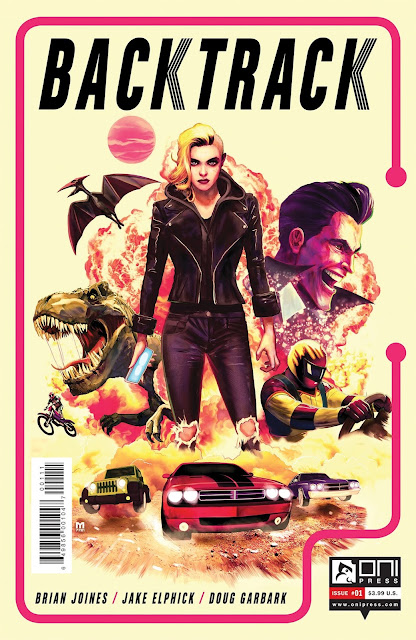 Written by Brian Joines
Line Art by Jake Elphick
Color Art by Doug Garbark
Letters by Jim Campbell
Published by Oni Press
Despite the fact that I never had a desire to personally own or drive a race car, I love stories about car races or high-speed chases, the sillier the better. From Cannonball Run to Baby Driver to The Fast and the Furious, anytime there's a movie about people getting into hijinks in their Honda, I'm all about giving it a try. When I was a kid, I'd make my Matchbox cars race and even kept statistics about who was better. Ironically, though, I never really got into NASCAR, with the Indy 500 being the only real race I ever watched semi-regularly.
Also ironic is the fact that we don't see more stories about car races in comics. I am sure there are a few out there, but I am hard-pressed to think of any titles off the top of my head. There's plenty of comics where cars (or space ships) feature prominently in the plot, often with a high-speed chase. But a series or graphic novel centering around a race itself? It's an odd hole in the comics world, one that Backtrack aims to fill. And it does a pretty good job of showing how this genre of story could be done in the future, too.
Alyson Levy, once among the best drivers when you need a wheelman, is a shadow of her former self, broken beyond repair. She's made too many mistakes, the "last" one fatal. She wants a chance to reset history, but that's impossible, so she's drinking herself into oblivion. Enter Casper Quellex, who claims to be able to reverse history, but only for the winner of a car race that pits Alyson against the top drivers in the world. It's impossible, but she's got nothing to lose. 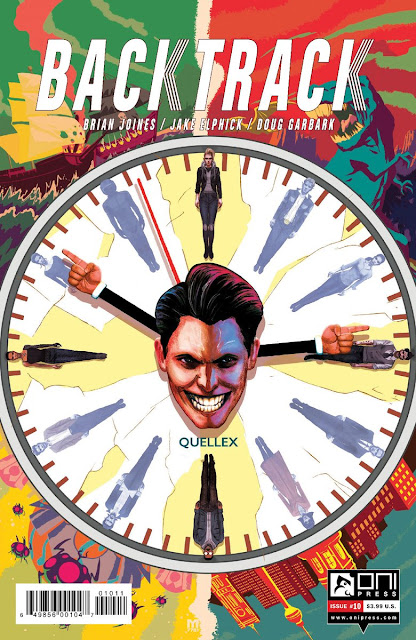 Now if the high concept stopped there, I'd have enjoyed myself immensely. But Casper isn't lying--he can manipulate time, and in this race, each leg is in a different era, starting with outrunning dinosaurs and careening to bloodthirsty pirates, evil communists in East Germany, and oh yeah, a race against a historical natural disaster, just to name some of them. So instead of just high-stakes, illegal racing, we get different time periods, different perspectives on the idea of these cars showing up out of nowhere, and, best of all, we get a level of threat that can and will kill off major characters. Starting off as competitors, the group, as it whittles down, has to learn to fight off the threats thrown in their way by Quellex together as their only means of survival. 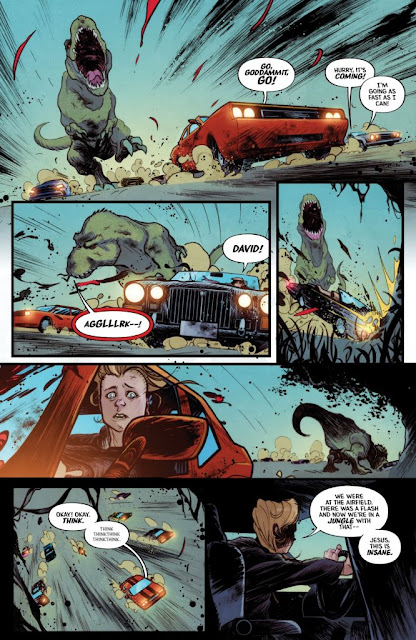 But only one person can win, and there's always a time when someone is going to decide it's to their advantage to fly solo. Especially when we see just how much of a manipulative bastard Quellex is. You see, this isn't his first race--he's been pulling people from our era for his own amusement (and illicit profit) for quite some time now. The difference is he's not met Alyson Levy--and her desire for the top prize--before. It's a press your luck situation that comes to a huge climax as winning the race isn't the only resolution readers get by the time we get to the closing pages.
The pages are jam-packed with subplots and secrets, and if I had one complaint, it's that Joines tried a little too hard to make things intricate and complex, adding depth to the characters by sometimes shoe-horning it in at the edges. Given the size of the cast and the number of issues, I think it would have been okay to jettison a few details so we could just revel in the broad strokes at times. It's admirable, but every once in a while I found myself wishing we didn't know quite so much about the Inspector or some other character. It was hard to keep up, especially given the pacing.
One of the things that might hamper more stories like this is giving the comic a sense of motion. Fortunately, Jake Elphick's line art gives a good roadmap* for how to do so, and I hope other artists take note. Comics are always about making the reader think about the actions. When Batman throws a punch at the Joker, the artist can't show every part of it. They have to select the moment or moments that most make the reader imagine the rest. Elphick really made me think the cars were driving at top speed, and I could easily picture how this race might look if the story were animated. That's not to imply a storyboard feel, far from it. Instead of stills, it felt to me like we were racing across the page with the characters, stopping only briefly to have some non-driving scenes that gave the story its beats.
To accomplish this, Elphick doesn't try to make everything look perfect or proportioned. His lines are loose and thin, akin to Matteo Scalera, but with perhaps a bit more of a manga influence. He's not afraid to make a slap to the face look as though the person got hit by a two-by-four. Cars remain familiar boxes, but they can morph a bit to aid the visual picture. The panels are rarely straightforward, opting to flow into one another or scatter about the page to highlight details in a close-up. 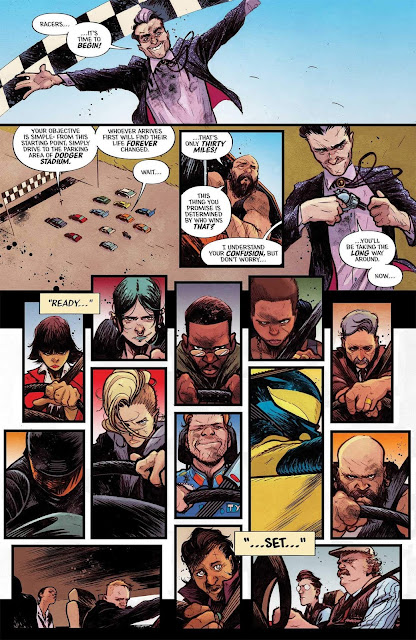 Within those panels, the characters don't have to stand upright all the time (one of my biggest gripes about modern-era artists), and frequently they are leaning at odd angles. When you combine this with some of the best use of vanishing points to make the reader think that the people/animals/cars are going to warp their way into our reality or to make it feel like they're covering a huge distance in a single panel, it's very easy to make this race rev to its high-octane finish.**
Aiding all of the above is the use of speed lines that get dynamic coloring from Doug Garbark. It's one thing to simulate motion with the linework. When you work in harmony with the colorist to ensure that the visual tricks are enhanced, it really sings. I especially like how Garbark makes the coloring very specific, allowing the free-flowing lines to stand out. Sometimes artists with a similar style get let down by colors that muddy things so much that you lose the details, making it look more like a sloppy art project instead of something people are paying money to read. 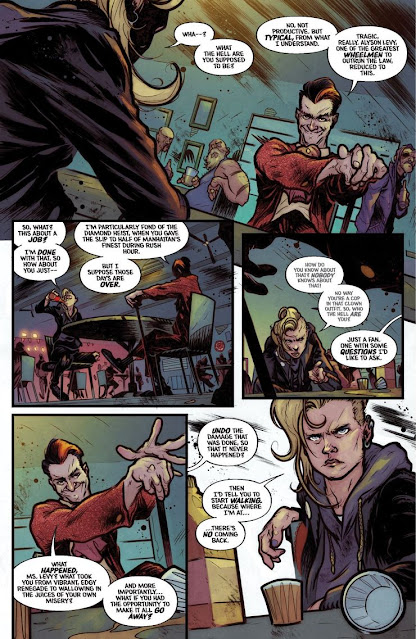 In this comic, Garbark ensures that not only do we get background hues, but the background characters featured there have a distinctive color scheme, even if it's just the shade of a hat. There's even a moment where there's a tiny color splotch inside an ink line to show that a person's sword might just be fresh with blood. That's the level of detail that separates a good coloring job from an okay one. It's also a big part of why I enjoyed this comic so much. 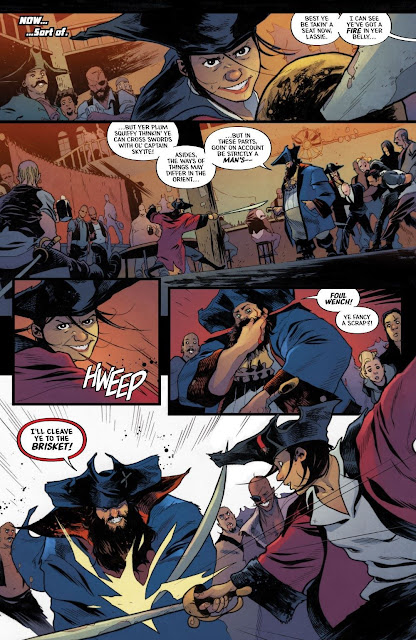 I admit that Backtrack is a comic that plays to almost all of my personal preferences (ludicrous premise, random acts of T-Rex, scrappy main character, and even a thumb-to-the-nose about time travel mechanics), but even still, it's a really well-done story that wraps up well without feeling rushed. The entire creative team should take a victory lap*** for how well this came together. Despite a few issues, this is a really fun romp that should appeal to anyone who likes self-contained sci-fi adventures and isn't too worried about the science, which is my favorite kind of sci-fi story. I'm not sure if this had enough eyes on it to merit a big trade push, but it's exactly the type of hidden gem that I started Panel Patter to write about. I'd love to see it get some more attention, and I look forward to what this creative team works on next.
*You're really lucky I didn't use more puns than just this one.
**Okay, two puns. It's my site, I can do that if I want to!
***That's three, McMonigal. You're really pushing it. - Scott****
****I get it, Scott. I'll pump the brakes.*****
*****Sorry, everyone, I give up. - Scott
Rob McMonigal at 2/18/2021 08:30:00 AM
Share
‹
›
Home
View web version