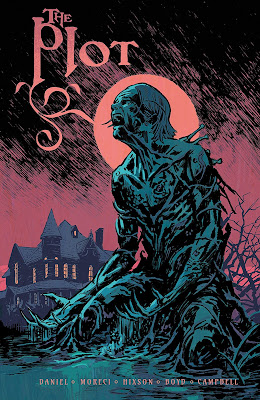 
The Plot gives me basically everything I want out of a horror comic. Existential fear and dread. A house that has something *seriously* wrong with it. Characters I care about, who are doing the best they can but are clearly in over their heads. A family whose dark history would make for a compelling story even without supernatural elements. A larger weird history and mythology underlining the story. Exceptional art paired with perfectly atmospheric colors, that skillfully brings the terrifying and weird story to life. Art that also scares the bejeezus out of you but still leaves things to the imagination. Horrifying imagery. The Plot has all of this and more.

The year is 1974. We’re introduced briefly to a lonely man, drinking in a dark house. The story then moves to Charles and Wendy Blaine; Charles is the head of a pharmaceutical company trying to address mental illness, which runs deeply in his family. Sadly, Charles and Wendy are not long for this world. They’re survived by two children, teenage Mackenzie and younger Zach. The kids now are in the care of their father’s younger brother, Chase Blaine. Chase is the troubled man we saw earlier, drinking alone in the large, dark house. The kids are now set to go live with their uncle Chase. However, from the very beginning, it’s clear that Chase and the whole Blaine family have a difficult history in Cape Augusta, their New England town. Sheriff Magnus Sullivan (with whom Chase has history) is waiting to greet them when they get to the house. Zach wanders around the property (the titular “Plot”) and ends up sinking into one of the bogs. And that’s only within the first five minutes. I don’t want to give too much away, but things only get darker and much, much weirder from there. 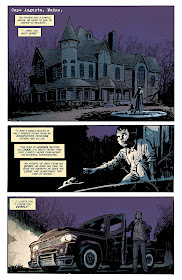 The Plot is an incredibly rich, engrossing (and gross) story. I used to think I didn’t like horror stories. But what I realized was that I just didn’t like stories where I was just scared or disgusted, and I didn’t feel like there was much else to the story. Give me characters I care about, an interesting, fully realized world, and sort of larger mystery and mythology, and then I’m happy to read a story that scares the hell out of me. As I mentioned above, The Plot has all of this (As written by the talented team of Tim Daniel and Michael Moreci) (Moreci writes the fantastic Wasted Space). And it is brought to life in incredibly rich, terrifying detail by the artistic team of artist Joshua Hixson and color artist Jordan Boyd.

Hixson drew one of my favorite comics of 2018 (Shanghai Red), and I’ve loved Boyd’s work (Invisible Republic, Deadly Class) for years now. The two work together in The Plot in a seamless way. Hixson has a rough, grounded style that I find incredibly appealing. It’s very much his own style but I’m also reminded of the work of David Mazzuchelli, David Aja, and Gabriel Hardman (all excellent company to be in); in particular, the way that them is instantly able to establish a grounded sense of place and time, and how they are all simultaneously “realistic” and also impressionistic. Hixson does a wonderful job with character work; there are many pages which rely on establishing the emotional state of the characters, and Hixson conveys fear and sadness and terror very clearly without being over the top. 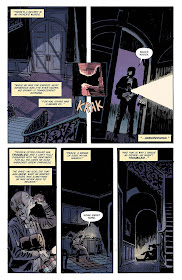 Hixson is a skilled and economical sequential storyteller. Action is always easy to follow (something not every artist excels at) and things like fight scenes are conveyed effectively as both focusing on the specific fight and also showing the larger sense of place. Hixson also skillfully lays out physical locations; the family plot needs to be ominous, but honestly the story doesn’t work if the house just looks like an obviously creepy and terrifying haunted house. But Hixson (to my relief) doesn’t go that way. The house is ominous (as it should be) but not in a facile “HOUSE OF MURDER” kind of way. The book is full, I think, of subtle and non-obvious choices. No one is a completely good or completely bad person. There’s suffering, but also occasional moments of love and togetherness.

Thankfully for Hixson he’s got a spectacular artistic partner in Jordan Boyd. Boyd is an incredibly versatile colorist, as his work in Deadly Class is over the top and explosive and not at all grounded in reality. Here, Boyd takes a very different approach (which also feels very distinct from the gray, gritty approach he took in Invisible Republic). This is a story set in 1974, so the color choices are as an initial matter more muted than a present day story might be. This is a story blanketed by tragedy and pain, and the faded colors suit the story well. There’s a lot of effective use of black and darkness generally, and when there are occasional bursts of atmospheric color, it’s to convey the effect of violence or some other dramatic action, and it works very well within the context of the story. Some of the imagery, of a person fading into darkness (or being pulled into it) is very minimalist, but genuinely terrifying. The book has a strong look and feel overall, with an appropriately creepy logo, terrifying covers, and also contains nicely done lettering from Jim Campbell (that suits the era and genre of the story well). 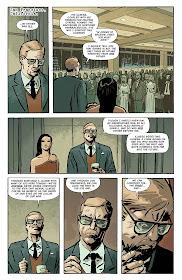 The Blaine family plot is inextricably tied to the history of the Blaine family. There are weird, horrifying things that seem to happen to family members generation after generation, and it’s all tied into the family home. Mental illness, murder, suicide, monsters, hallucinations and delusions - they’re all there and they’re all tied together.

What really grabs me about this story and the terrifying family/plot history is what I mentioned above; this is the story of a family who’s dark history of mental illness and tragedy would make for compelling storytelling even if there were not any supernatural elements involved. As someone who’s dealt with depression directly and indirectly, it’s clear that there is a history of that in the family. What’s also clear (in this story, and in life generally) is that things that happen in one generation cannot help but cascade out throughout multiple generations. This is true for problems as well as decisions made. 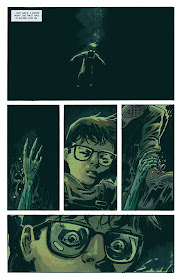 As with any family, the decisions you make can end up impacting your family for generation after generation. I’m reminded of one of my favorite Bible verses:

‘The Lord is slow to anger and abounding in steadfast love, forgiving iniquity and transgression, but he will by no means clear the guilty, visiting the iniquity of the fathers on the children, to the third and the fourth generation.’ - Numbers 14:18 (similar passages appear multiple times in the Bible)

I’ve always liked and appreciated this clause, and think it’s fundamentally misunderstood. I don’t think it’s saying that God will literally punish third and fourth generations for the sins of their parents. Rather, I think this was a fundamental insight into the nature of life and consequences. If a person commits a heinous crime, that is a decision that cannot help but have consequences for multiple generations on that person’s life and family. 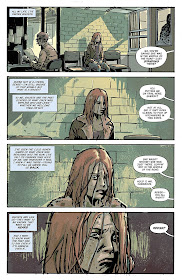 Given all of that, the story of The Plot resonates as being true to life (setting aside terrifying supernatural imagery), and I think that writers Tim Daniel and Michael Moreci have tapped into something fundamentally true about human nature. Chase is an incredibly troubled man. He fled the family home years earlier due to some tragedy. He’s back now and acutely feels the burden of his family. He’s suddenly been thrust into the role of caretaker for his niece and nephew, who he barely knows. And this is his family home, and where he’s trying to care for them. But it’s not easy, as there are figurative and literal ghosts he’s got to deal with, including complicated relationships with the town Sheriff, and his former love Reese (who's also Mackenzie's teacher at school). And things get weirder than that, as Reese and Sheriff Sullivan seem to have deeper connections to the family and the family plot.In particular, Reese seems to have some dark secrets of her own.

What I’m telling you is that if you like horror stories, particularly existential “there’s something wrong with the house” tales, and stories that use genre as a way to explore big ideas (and also deeply unsettle you), then you absolutely have to be reading The Plot.
James Kaplan at 1/06/2020 02:00:00 PM
Share
‹
›
Home
View web version