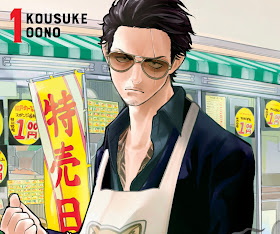 The Way of the House Husband Volume 1 has a ridiculous premise but is really enjoyable because of the Kousuke Oono’s devotion to that ridiculous premise. Oono’s main character Tatsu, once having earned the nickname “The Immortal Dragon,” is oblivious to his own situation that he’s now a stay-at-home husband, fending off kitchen knife salesmen and robot vacuums with the same gusto that he fought rival yakuza killers in another lifetime. His obliviousness leads Oono to show us Tatsu through other people’s perceptions of him, like that knife salesman who has no idea what he’s getting into. Tatsu’s skills as a killer shift to being a house husband remarkably well, playing to the comedy of the shared skill sets of both roles. No matter what life he’s living, Tatsu is who he is and doesn’t recognize the difference between taking on a rogue Roomba or dangerous ghosts from his past.

Incapable of recognizing the incongruities in his life, the two sides of Tatsu exist together without any self-awareness of the image he projects to his neighboring housewives or to the yakuza gangs that track him down. To himself, he seemingly walks the same path he always had and Oono has a fun time playing with this. He has a fun time putting this killer in a grocery store, trying to find some way to please his wife or placing this home-bound husband in dangerous situations by having old partners and rivals tracking him down, expecting him to be the man he used to be. Homemaker or killer, that’s the dichotomy of Tatsu’s character that Oono has fun setting against each other in this initial volume. 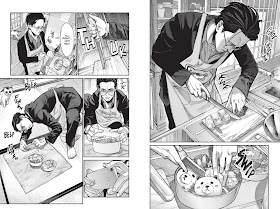 Oono has a visual sense that allows Tatsu to walk in these vastly different worlds. It’s not the most dynamic or exciting artwork but the dual nature of the story is also captured in the artwork, where you can tell that Oono is as comfortable with how gangster stories are supposed to be told as he is with everyday, light-touch stories. Representing the split nature of Tatsu, Oono’s art can be cute and almost saccharine on one page and then dark and violent on a few pages later. There’s not particularly great or inspirational images throughout this book but Oono shifts between light and shadow (like his main character) with an ease that helps move you through these contrasting moods.

In a lot of ways, Tatsu is a lot like another great manga character, Kiyohiko Azuma’s Yotsuba! Yotsuba has such a different life than Tatsu; she’s a young girl who is experiencing the world for the first time. She’s an innocent in this world that’s full of wonders and Azuma shows us those wonders for the first time through her eyes. But she’s unaware of the world, unaware of the world beyond her own experiences. That is how Tatsu is like her; their definitions of themselves and the world are completely defined by their own experiences in it. While Tatsu uses his lethal expertise to try out a set of probably cheap knives, he’s got a door-to-door salesman sitting across the mat from him, probably scared that Tatsu is going to see how well those knives cut him. Instead of putting the knives through their paces on a human subject, something that a man known in his past life as “The Immortal Dragon” would do, he does what anyone would do— he prepares a meal, pleased with the knives ability to cut through vegetables. 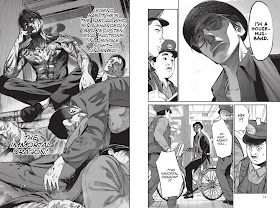 Azuma and Oono’s characters live these lives where they don’t recognize anything outside of their own experiences. They don’t have the context to understand the world or even their places in it so they end up only reacting to the people and events around them. Yotsuba and Tatsu (at least in this first volume) don’t really change. So Azuma uses the cast of Yotsuba’s father, friends and neighbors to reflect growth in these stories, giving Yotsuba new experiences and new joy as she plays off of the supporting characters. It will be interesting to see how Oono continues this series; will Tatsu ever become self-aware or will he remain the same? As a single volume, the misadventures of Tatsu are fun; it’s fun to laugh at this miscast killer. But how will Oono create any momentum in this series to keep his audience reading it?

Tatsu exists between two worlds, one we think of as safe and another that we know is dangerous. As Oono has Tatsu navigate the intersection of these worlds, Oono discovers a humor that can only be found in “innocent” characters. Tatsu may be a killer so calling him innocent isn’t completely true but there’s a purity in him on display that doesn’t recognize evil, that doesn’t recognize a corrupt world. It’s weird and heady to talk about this book in terms of innocence because Oono acknowledges Tatsu’s past even when the character seems to have a blind eye about who he once was. 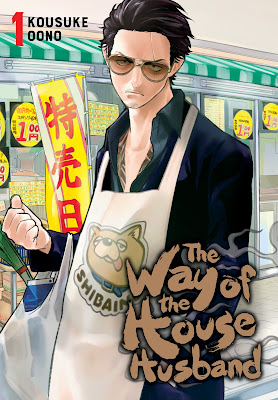 The Way of the House Husband Volume 1
Written and Drawn by Kousuke Oono
Published by Viz Media
Scott Cederlund at 1/10/2020 08:00:00 AM
Share
‹
›
Home
View web version