“Sadness is a crime” in Gabrielle Bell’s My Dog Ivy

Gabrielle Bell’s books often read like a form of therapy where Bell is trying to simultaneously accept her life while using her storytelling to try to move past it. By drawing her stories in books like Everything Is Flammable and Truth Is Fragmentary, she shares the best and worst about herself. But in those longer books, she gets to shape the stories, molding them into the narrative she wants to tell. The other side of her autobiography work is her yearly diary comics, usually created daily each July to tell a story of each day in just six panels. My Dog Ivy, collection of her diary comics from a year or two ago, presents a month where she watched the house and pets of her publisher Tom Kaczynkski when he went traveling through Europe with his wife Nikki. Thanks to the format of them, Bell’s diary comics offer her usual wit and unique perspective but without giving her a lot of time to think about them. The immediateness of her work in My Dog Ivy creates an intimacy with the daily events, a personal connection to the feelings and interactions in Bell’s life that are offered without a filter or even without regard to what we may think of the cartoonist after reading them.

Over this month’s worth of autobio comics tracing her tenure pet sitting a couple of cats and a dog, Bell experiences everything from her nervous reluctance to the task ahead of her, through the bonds that she forms with the dog Ivy, to the sorrow of having to give up “her” dog at the end of the month. And it’s all infused with the type of jittery self-consciousness that’s become her naturally-presented state of being. Her natural state is to doubt herself and the world around her. She never seems comfortable in the world that she is living in. It’s not that the world is bad or even scary; it’s more that the world operates on a different frequency than Bell does. Yet over the days covered in My Dog Ivy, Bell discovers a connection to Ivy; they develop a bond that can only come from sharing a home and walks together, creating a temporary balance that she eventually settles into by the end of the month. 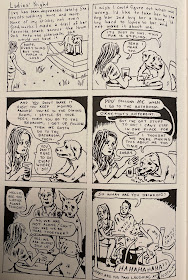 In these daily comics, Bell has to take a 24 hour period and find six panels to get across events, emotions, and personality of herself and the people & animals around her, including of all things an obstinate dog. This is not a full book where she has pages and chapters to flesh out these things. In these comics, each strip has to encapsulate an event but also the experience of that event. It’s not enough for her to tell us that something caused her doubt or joy; she transfers that doubt or joy to her reader. Thanks to Bell’s skill at crafting a story around something as mundane as meeting a friend for drinks, she reveals a shared humanity of wanting to get lost in herself for a little bit, to take a break from the here and now for an afternoon. That’s what her comics do— taking a specific experience experience to the artist and relating it in a way that we, the audience, can understand and empathize with.

The story of the people that she’s pet-sitting for sounds more exciting and glamorous than her story does. Tom and Nikki are taking a month to travel through Europe by train. There has to be stories there, new sights seen and new food tasted. But that’s their story, not Bell’s. Her story is at first doubting her own ability to live her own life for a month, let alone keeping two cats and a dog fed and safe. And her story moves to finding comfort in Tom and Nikki’s home and with their pets. As Bell can find something extraordinary in the ordinary, her comics are reminders of the stories that we all are living, dedicated to the small details that add up over time to shape who and what we are. Adventures in Europe are memorable stories but who we are is that person who has to get through the days and the months where we experience both doubt and joy on a daily basis. 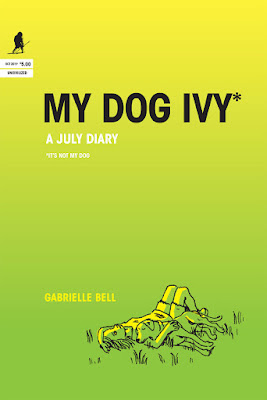