Just Trying to Kill the Pain— a look at Elsa Charretier and Matt Fraction’s November Volume 1: The Girl on the Roof

Sometimes Matt Fraction’s writing can get caught up in its cleverness, forming a perpetual motion machine of self-reverential creativity. That’s not a bad thing as it sends Fraction and his many collaborators down come fascinatingly undiscovered paths. But in November Volume 1: The Girl on the Roof, created with Elsa Charretier, Matt Hollingsworth, and Kurt Ankeny, Fraction pulls back on his characteristically unbridled creativity and writes a very terse crime story, hailing back to the beginning of his career and The Last of the Independents with Kieron Dwyer (and soon to reprinted in 2020.) His usual cleverness (see any recent issue of Jimmy Olsen and almost any issue of a personal favorite Casanova) shifts its focus from character introspection to the forward propulsion of this mosaic plot. He sets up the plot with a job offer; do a daily crossword puzzle, solve the code and broadcast the results. As long as Dee does that, everything’s cool. Without getting caught up in the details and minutiae, Fraction jumps from the setup to the moment when the job goes wrong. Charretier and Fraction don’t have time to dwell on the details as they need to get in and out of the story quickly and efficiently, creating suspense without having to spend a lot of time setting it up.

Thanks to Charretier and Hollingsworth’s art, it may would be easy to compare this book to Darwyn Cooke’s Parker adaptations. Charretier draws upon the same Bruce Timm art school that Cooke did, a more classically animated style that focuses on style and character as ways to develop tone and story. You can even go back to Mike Parobek and the Batman Adventures comics of the 1990s to see this style in action. Where Cooke (and by extension of the adaptation nature Robert Westlake) spend a lot of their time on setup, planning, going over the plan and again as the character of Parker left nothing to chance, Charretier and Fraction simply set up that something is going to go wrong right away— Dee is shown to be a bit of a fuckup so it would have been surprising if everything went to plan. So why show the Parker-like attention to every facet of the job if your main character herself is just going to blow by the “hows?” and “whys?” and jump straight to the “what now?” Charretier’s suggestive art pulls the dangerous drama out of the lives that these characters lead. But where the art looks like Timm or Cooke, Fraction’s writing is a lot more terse here, moving from set up to “everything falls apart” in the least number of steps and panels possible.

With this terse narrative, Charretier and Fraction need to use every moment in the book to push both the characters and the action of the story. Every panel needs to propel the story forward while also revealing these characters wants and fears. Dee wants a true human connection and one of the only places she can find it is in a strip club where she uses the private booth partly as a shared space with another person and partly as a confessional booth. It may be the only place where she can be honest with herself because her job basically guarantees that one day she’ll have to burn the city to the ground. Dee is caught between her responsibility and her own desires but she doesn’t have any choice here. Charretier and Fraction makes us feel for Dee in every single panel that she’s in and make us worry about her when the story changes its perspective away from her and to other parts of the city.

With that need for every story beat to drive the story forward, the fourth chapter is an odd diversion for the book, presenting the story of a couple of evidence-locker cops. This moment, away from Dee and the consequences of her job, becomes the weak link of this first volume. How it relates to Dee, her job and even the current violence in the city is hard to figure out. As this is the first part of a planned three volume, we may have to trust right now that Charretier and Fraction are going to connect the threads here. But within the flow of this volume, this sequence about the sanctity of chain of evidence, a pair of woman’s undies and a Sarah Vaughan album is an annoying distraction because it feels like it’s part of another story. Hopefully that story shows up in volume 2 or 3.

As with these cops, Dee is not the sole focus of this story. From a woman bringing her friend in Dee’s building some groceries to the dispatch officer manning the boarders when everything goes wrong, Charretier and Fraction shape a quilt-like story, creating these tendrils of cause and effect that lead back to Dee and that job offer. While this is Dee’s story, Charretier and Fraction make this the story of a city on the brink of a majorly bad night. The stakes here are not just the life and death of an single person. At risk here appears to be the salvation or damnation of the whole city. The brokenness on display here creeps down to even the children of the city. Knocking the groceries out of the woman’s arms, her safety spills all over the street just like the food does. If that action had not happened, the woman could have entered the building and gone about her life. But something about this city and this night would not let that happen and it used the kids as it’s agents to pull her down with everything else. It’s as if Dee’s decision to take this job damned the entire city and everyone in it.

Fraction is channeling his inner Ed Brubaker here, using crime as an invasive element of the human condition. This innate corruption is not how the world is supposed to be but it is still that way nonetheless. Everything in this book is infected by some societal sin that has eaten away at everything good and pure in this city. Charretier and Fraction are our guides into these shadows and unseen corners of the world that seems like it is only a few blocks away from where you’re sitting right now. The world around us is falling apart and November Volume 1: The Girl on the Roof shows us just how close to the precipice we are at any minute. 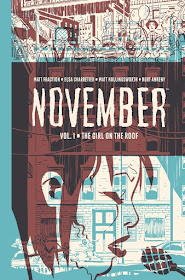