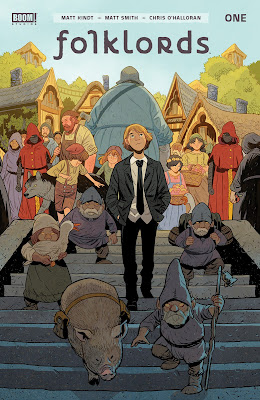 Folklords #1 by Matt Kindt, Matt Smith and Chris O'Halloran, published by Boom! Studios
This was a really fun debut. This story is set in a magical world, and the premise is that there's a boy who has been having dreams of another, strange world. Our world. I've read this issue and very much enjoyed it. Matt Kindt is one of my favorite comic storytellers, and he's paired here with another very talented Matt, the artist Matt Smith. Folklords feels like it's going to be a very fun, engaging ride, and I'd highly recommend it. 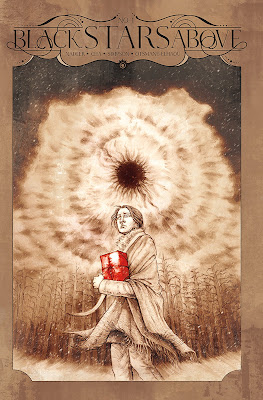 Black Stars Above #1 by Lonnie Nadler, Jenna Cha, Brad Simpson and Hassan Otsmane-Elhaou published by Vault Comics
While I'm not much of a horror movie person, it turns out that I really love a good horror comic. And Black Stars Above is a strong debut issue of a horror comic. This isn't an obvious "monsters are running around everywhere" kind of horror. No, this is a more subtle, interesting book. Don't get me wrong, weird things are happening here.  But the entire creative team in Black Stars Above does a wonderful job of creating and bringing the world of the story to life. And it is a cold, desolate, lonely, scary world (the best kind of world for freaky stuff to happen). There's a family of fur trappers living on the frontier, and it's a hard, brutal existence. And then things get weirder.  Nadler really captures the sound and feel of 19th century remote existence (I mean, I assume, I wasn't there) and tells a tough, emotional, tale. The story has first-rate art and colors from Cha and Simpson; they really effectively bring to life the desolate, isolated nature of existence in this world, and the otherworldly nature of the looming threat. Otsmane-Elhaou does excellent lettering, as he always does.  I really felt shivers reading this one, and I think you'll enjoy it too (in a freaked-out "what the hell is going on" kind of way). 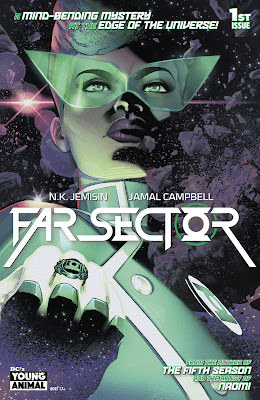 Far Sector #1 by N.K. Jemisin and Jamal Campbell, published by DC Comics
I'm really interested in the serious sci-fi vibe of this story. I haven't read Jemisin's work but I know she's a highly acclaimed sci-fi author, and the premise of a Green Lantern agent at the far end of the universe in a city of 20 billion beings, well that sounds pretty cool. And the art looks great. So, count me in! 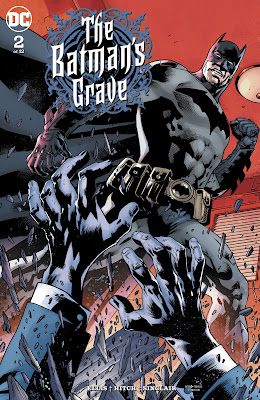 Batman's Grave #2 by Warren Ellis, Bryan Hitch and Alex Sinclair, published by DC Comics
The first issue of this comic was a delightful surprise, but I should not in retrospect be surprised that I enjoyed this comic. I mean, Warren Ellis and Bryan Hitch! The team that brought you The Authority! Issue 1 was one of the best Batman comics I've read all year, a story where Batman is actually doing detective things and earning his "world's greatest detective" title. And the art was wonderful. So I'm absolutely up for more. 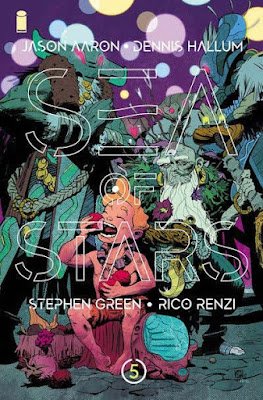 Sea of Stars #5 by Jason Aaron, Dennis Hallum, Stephen Green & Rico Renzi, published by Image
As the year comes to its end, so does this beautifully imagined story told by Aaron, Hallum, Green and Renzi. Sea of Stars has been a comic who has done little to stand apart from its printed peers, but, without trying, did it better than those who were intending to stand apart from all the rest. The colors, the layouts, the nearly cartoonish (but never childish) illustration style, and the slowly developing world all taking place before your eyes as you follow a sarcastically cocky, but innocently silly child into the depths of outer space. I fell hard for this comic. After the first page of the issue one I saw no end to my enjoyment as the pages kept turning themselves. The father/son relationship presented itself within the story’s beginning and was suddenly ripped apart by waves of an uncertain space monster. From then on it was a blind chase back to one another. Then it got weird. Then it got fun. Then, weird again.. but also touching with warm regards. The boy, Kayden, is the star in this endearing story as he makes his way through space in search of the father he had lost. Is he alive? Is he dead? Is he searching for him also? Along the way he uncovers deific abilities that have only recently been hinted with explanations. This will read very strong in collected format, and I look forward to how things come to a close in this final chapter of the first story arc. 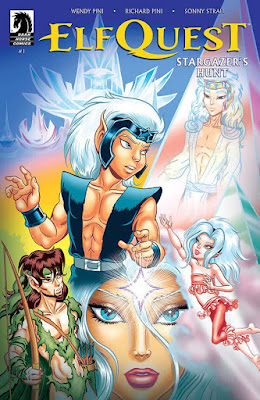 Elfquest: Stargazer's Hunt #1 by Wendy and Richard Pini and Sonny Strait, published by Dark Horse Comics
When "Final Quest" came out, I'm sure many people, including my long-time friend and Elfquest superfan Drew, were worried that might be the last we saw of the characters. Fear not! Wendi and Richard, with artistic collaborator Sonny Strait, are back in the Elfquest world, following a new path within their epic, decades-long adventure. Where will this thread lead? Who knows, but it's likely to be awesome, and anyone who's ever loved Elfquest needs to pick this one up at their local shop. 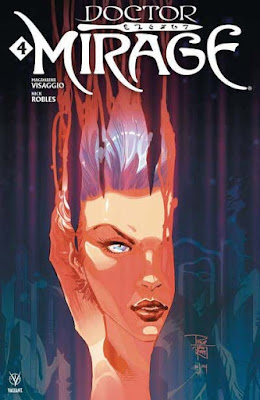 Dr. Mirage #4 by Mags Visaggio, Nick Robles, Jordie Bellaire, and Dave Sharpe, published by Valiant Entertainment
Dr. Mirage thought she'd do anything to be reunited with her husband, but now that she's dived head first into mythology that's outside her range, all might be lost as this series continues to ramp up the tension and weirdness. Nick Robles is pulling Ditko-Duty being as strange as possible with the visuals, and with his skills and Jordie's colors, it's an artistic tour-de-force. Meanwhile, Mags is doing some of the best writing her of career here. She's really exploring this characters's weaknesses and how it might lead to ruin, setting up an ending I can't wait for. If you like stories about magic, don't sleep on this one or you'll regret it!
Panel Patter at 11/13/2019 08:00:00 AM
Share
‹
›
Home
View web version