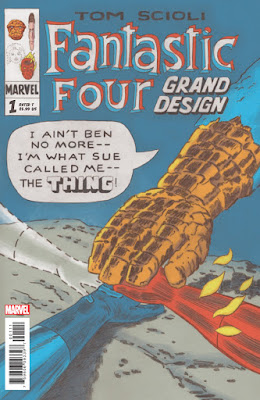 Fantastic Four: Grand Design #1 by Tom Scioli, published by Marvel Comics
This is one of the comics I've most been looking forward to all year. I absolutely loved Ed Piskor's X-Men: Grand Design. I loved the idea of having a nontraditional indie/underground comics creator using their singular vision to retell the stories of the X-Men. Piskor was well suited to the task, and I'm (honestly) even more excited to see what Scioli does with the Fantastic Four. Scioli is one of my favorite comics creators; he has a real vision as an artist and has a wonderfully idiosyncratic sense of humor. Also, while his style continues to evolve, he first came to my attention as the artist (with writer Joe Casey) on the incredible G0dland, which is very much a tribute to cosmic Kirby. His American Barbarian was a hilarious riff on Kamandi along with lots of other things, and his Transformers vs. GI Joe (with John Barber) will forever endear him to me for being one of the weirdest, most amazing comics I've ever read. Anyway, Scioli is an incredible talent and he clearly loves the work and spirit of Jack Kirby, so I'm positively thrilled to see him take on the Lee/Kirby book that kicked off the Marvel Age of superheroes. 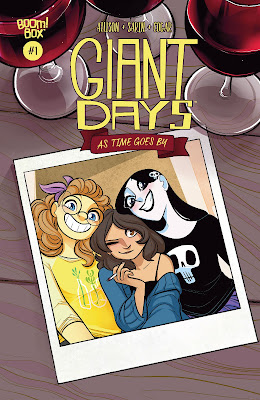 Giant Days: As Time Goes By #1 by John Allison and Max Sarin, published by Boom! Studios
Giant Days has gone, over the course of five or so years, from "a book I think is cute and fun" to "one of my favorite comics ever".  Giant Days is what David Harper astutely referred to as a perfect "Hang Out Comic". As much as I enjoy the ongoing story of Daisy Wooten, Susan Ptolemy and Esther de Groot, I really just love spending time with them. They're 3 university students who've developed an incredibly deep friendship over the course of their time in University. But alas, their time has come to an end. The series proper ended last issue, and this one catches up with the characters one year later. I want to see how they're all doing and spend one more issue with Daisy's beautiful optimism, Susan's skepticism mixed with deep caring, and Esther's, well, just Esther-ness.  It's incredibly funny, astute, heartfelt writing from John Allison, brought to life (for most of the series) by the spectacular Max Sarin. Giant Days has been a hilarious, heartbreaking, moving, weird series, and as always, I give it my highest recommendation. 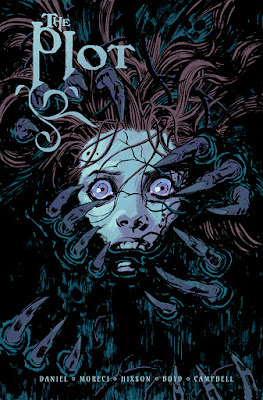 The Plot #2 by Tim Daniel, Michael Moreci, and Joshua Hixson, published by Vault Comics
I don't like horror movies, but it turns out I actually really love a good horror comic. Haunted house? Creepy monsters? Looming sense of existential dread? People going into a situation they're wholly unprepared for? I am here for all of that. They're tropes of horror, but that's not a problem as long as they're done well. The good news is that The Plot is a very strong comic which features all of these ideas and a lot more, from the writing team of Michael Moreci (Wasted Space, one of my favorite books of the past few years) and Tim Daniel, with art by Joshua Hixson (Shanghai Red, absolutely one of my favorite books of 2018). I don't want to say too much about the plot (ha!) of the story, but let's just say there's a man wholly unprepared to take care of kids thrust into that role. That's hard enough as is, but there's also something seriously wrong with the house.  The story has loose echoes of something like Locke & Key, but this house doesn't seem nearly as fun or whimsical. The story from Moreci and Daniel is very strong (a lot of hints at a dark and weird family history), and the art from Hixson is just fantastic. Really creepy and unsettling (not surprising, given the incredible work he did on Shanghai Red). Anyway, if you like clever spins on the "something very wrong with the house" horror genre, I definitely recommend you check out The Plot. 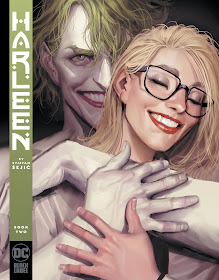 Harleen #2 by Stejpan Sejic, published by DC Comics
I think of myself as someone who's not into the Joker or Harley Quinn. But then, comics keep coming along that chip away at that stance. For example, Harley Quinn: Breaking Glass is a YA graphic novel by Jillian Tamaki and Steve Pugh, and it's one of my favorite books of the year. And there is this book, Harleen, which I picked up because I enjoy the work of Stejpan Sejic. Sejic is an incredibly talented artist - I think he is known more for his more adult-oriented comics work (such as Sunstone) but I remember him briefly coming on for a time on Rat Queens and being struck by what a dynamic, talented artist he is. So, I read the first issue and was really impressed. It was a thoughtful study of Harleen Quinzel which also had some of the sexy elements that Sejic is well known for. It's a little weird seeing the Joker as a handsome guy (as he is depicted in this story) but it's more than that, his charm that Harleen is drawn to, that really comes across. Anyway, I've found Harleen to be a smart, psychologically probing series and I'm looking forward to more. 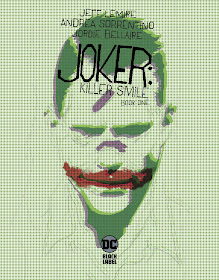 Joker: Killer Smile #1 by Jeff Lemire, Andrea Sorrentino and Jordie Bellaire, published by DC Comics
So, somehow this week I'm recommending not only a Harley Quinn book but a Joker one as well. I'm really not particularly a fan of the Joker, and I'm definitely not a fan of people that are super into the Joker. I typically prefer a more proper villain (Doctor Doom, Magneto, Lex Luthor, etc.). But I find myself in the position of really wanting to read Joker: Killer Smile. That's almost entirely due to the creative team of Jeff Lemire and Andrea Sorrentino. They've been making incredible comics together for a while now, like Green Arrow, Old Man Logan, and Gideon Falls.  They tell dark, suspenseful, scary stories together, and while Sorrentino is a spectacular colorist of his own work, I've loved his art even more in Gideon Falls where he's been colored by the master, Dave Stewart (seriously, read Gideon Falls - Sorrentino has gone up another level as far as skill and weirdness).  Given how great Sorrentino has been when paired with Stewart, I'm super excited to see him team up with another master of color art, Jordie Bellaire. She's an incredibly versatile colorist (and storyteller in her own right), and this seems like a spectacular team. So, while I still have no interest in seeing the Joker movie, I'll absolutely pick up Joker: Killer Smile.
Panel Patter at 10/30/2019 08:44:00 AM
Share
‹
›
Home
View web version