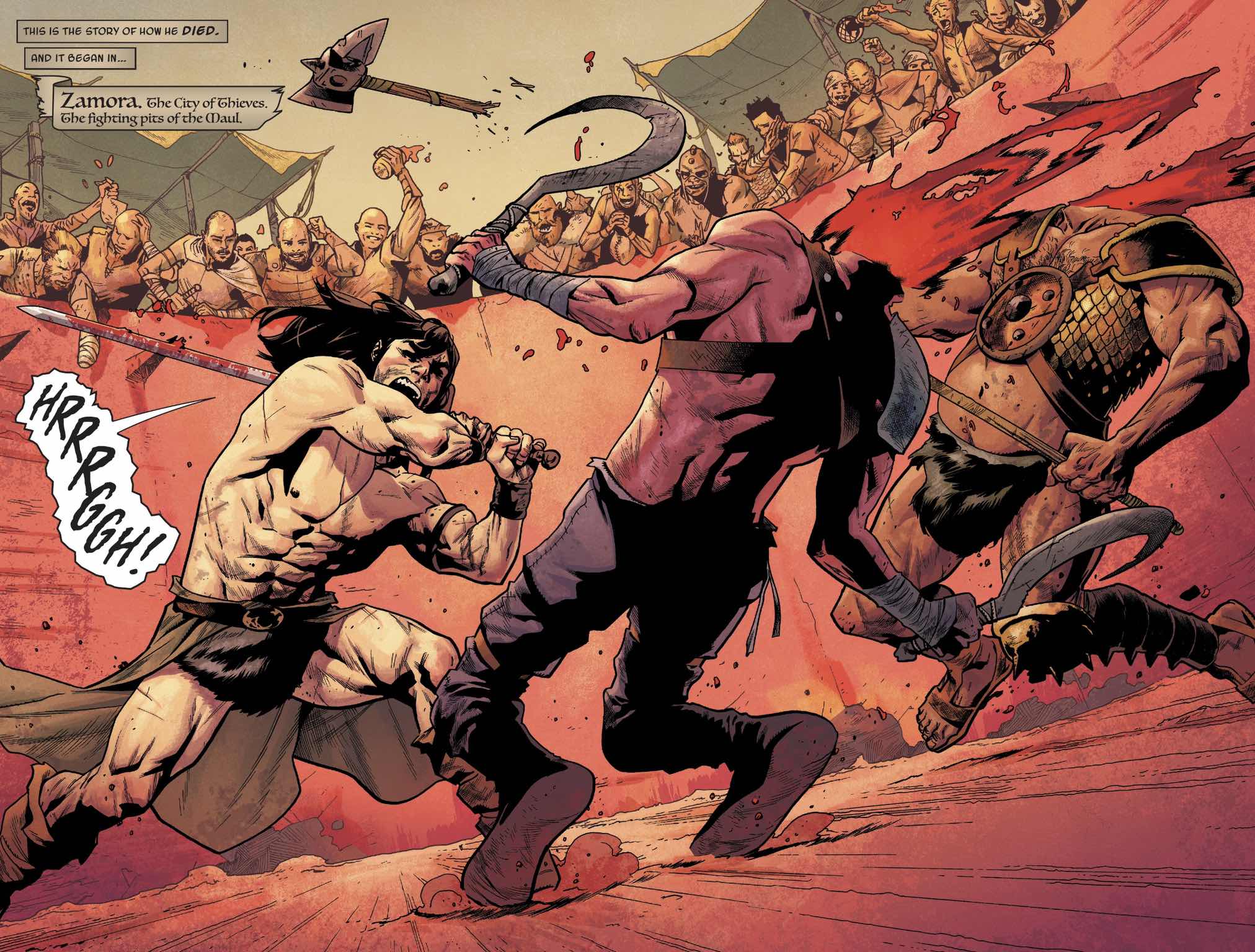 This comic is a throwback to nearly every other Conan comic in existence (and there are a lot of them.)  Yet sometimes a comic about muscles, swords, blood and decapitations are all you really want. When that is what you want, there are Conan comics. “... Black-haired, sullen-eyed, sword in hand… A thief, a reaver, a slayer… With gigantic melancholia and gigantic mirth…”. That’s the introduction to the character that Jason Aaron, Mahmud Asrar and Matthew Wilson’s Conan The Barbarian #1 gives us, text superimposed over classic drawings by Barry Windsor Smith, John Buscema and others, lifted from old Marvel Conan comics.  This brief primer is just about everything you need to know about one of Robert E. Howard’s best known creations. For a man who will be on a journey from warrior to king over his lifetime, Aaron, Asrar and Wilson’s imagining of Conan begins with the simple basics; he’s a man who can cut off another warrior’s head with one swing of his sword.

Conan isn’t a Marvel superhero.  An uncomplicated character living in a mystical world, he’s not a hero who has to overcome some great tragedy of his past that has taught him some important moral lesson.  There is no “with great power must come great responsibility” revelation for this character. Any lessons he’s learned have involved blades and women, two of his favorite things.  But then again, Marvel’s Thor historically has not been the deepest character either but Jason Aaron has turned the Odinson’s story of his quest for worthiness into one of that character’s greatest stories in his nearly 60 year history.  Even Aaron’s earliest Thor stories, with artist Esad Ribic doing his best Frank Frazetta homage (and on the cover here,) felt at times more like the rough-hewn tales of Conan than those of a blond-haired, Norse god. As we’ve seen over the arc of Aaron’s Thor and even his creator-owned Southern Bastards, the writer can be brutal, fierce and searching for meaning right along with his characters. 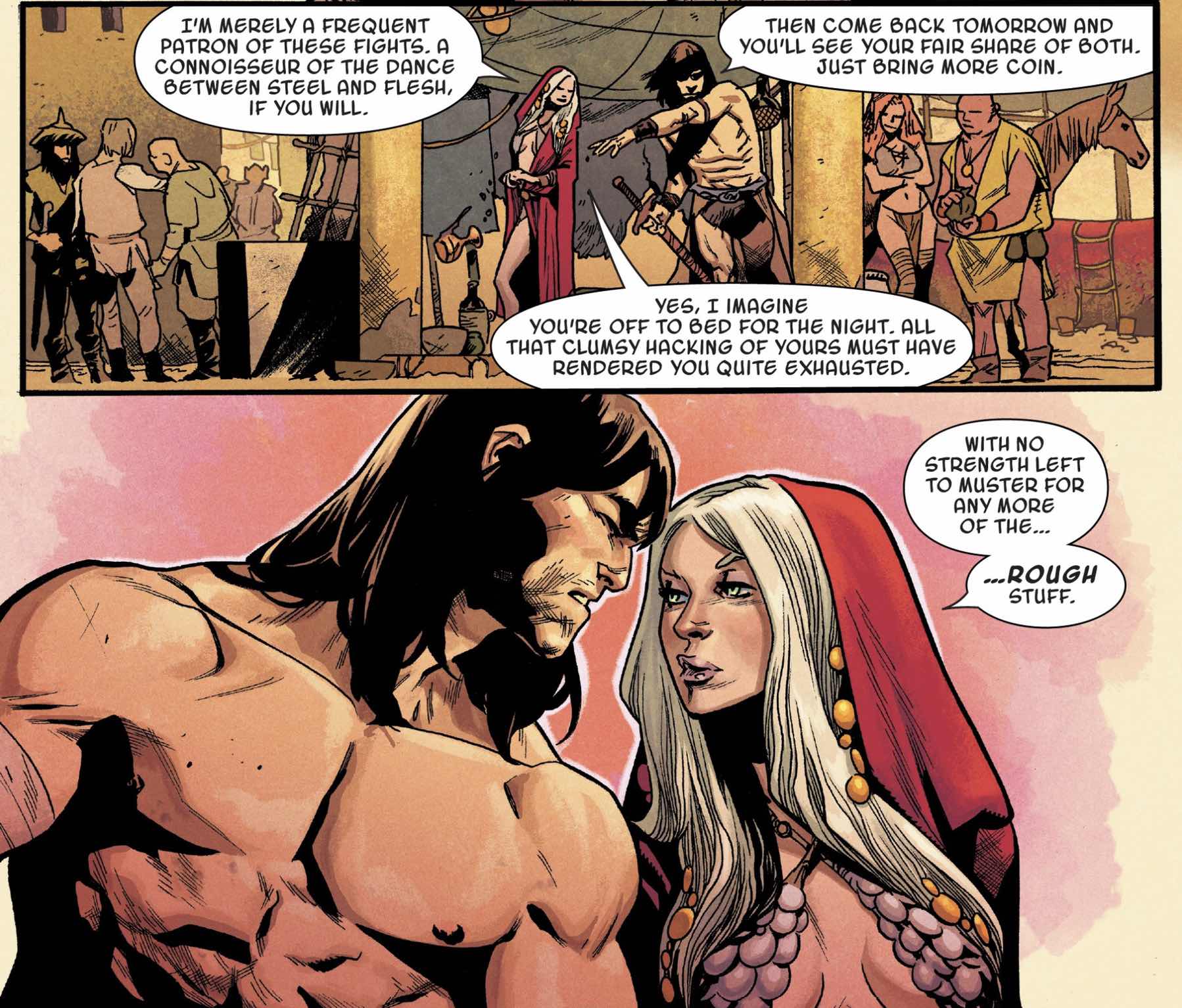 Conan The Barbarian #1 is a Conan comics, no more and no less.  This story of Conan versus a sorceress who needs the blood of “a man who refuses to die” feels right in that way.  It doesn’t try to define a new status quo for the character as much as it tries to remind us of who he has always been.  Hopefully that line about Conan being “a man who refuses to die” from midway through this issue is more than just a throwaway as this tale spans the days from Conan’s young days as a barbarian to his regal, elder days as Conan The King.  Aaron has the sound of a Conan comic down but ultimately this series is going to need more of the writer’s unique voice to succeed. Aaron’s best stories have a distinct worldview to them, something that the main characters drive to make the stories their stories.  This issue’s worldview is simply to recreate Robert E. Howard’s tones and plots, rather than finding Aaron’s own voice. This was similarly a weakness in his Star Wars comics as well, faithful but stilted reinterpretations of the original movies.

But what you can’t scrimp on in a Conan comic is the blood and the guts which Asrar and Wilson are more than up for the task of visually giving us.  The brutally romanticized art creates a story where we could be turned off from the violence if we weren’t enthralled with the shape and weight of the characters. There’s no denying the beauty of Asrar’s Conan so even the horror has to live up to that beauty.  Drawn with a graceful flair, this Conan moves fluidly whether he’s ripping off zombies’ heads or wooing the women. Conan may be a barbarian but that doesn’t mean that he has to look like one all the time. This Conan is big, larger than life, and you can tell that he’s always ready to burst into action.  Asrar’s gorgeous art and Wilson’s wonderful and luminous colors create pages that you just want to linger on and soak in the feelings, smells, sounds, and energy of. 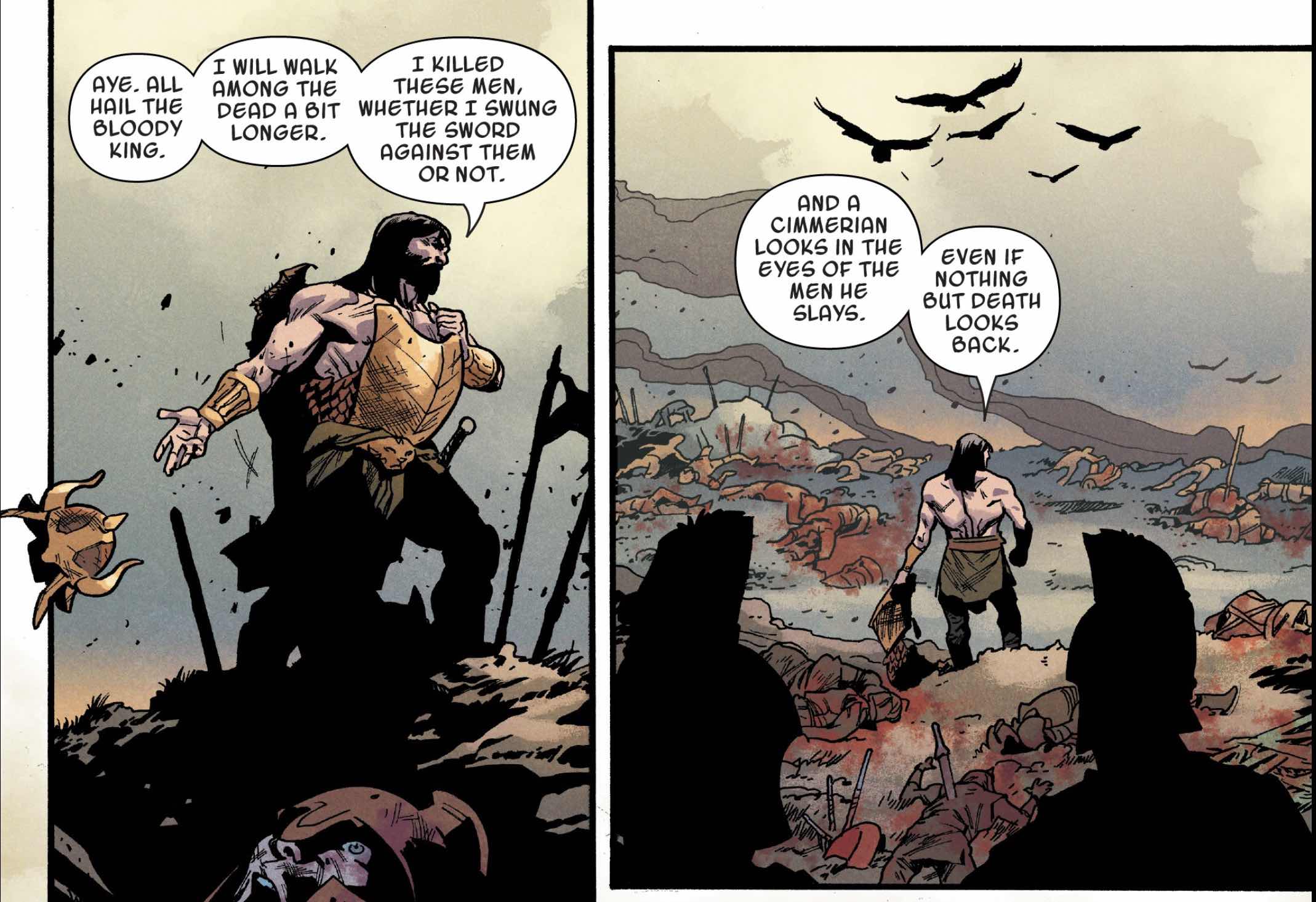 As seductive the art is, there’s not a lot to this issue that doesn’t feel like it wasn’t ripped out of Roy Thomas’ pen back in the 1970s and 1980s during Conan’s original comics heyday.  There’s Conan, some beautiful women, some monstrous evil, some implied sex and a lot of blood. Those are the ingredients of many Conan stories from Marvel and, more recently, from Dark Horse.  But in this issue, Conan himself remains largely a blank slate, up until the final pages where we see an elder Conan, a king collecting himself after battle. Here we see an older, wiser, and tired Conan.  Aaron and Asrar both convey a heaviness to the character that hints at untold adventures and responsibilities that we will hopefully get to see. For a brief moment, Aaron writes a character who can grow and has grown.  Conan the King, in this brief glimpse that we get of him, is far more interesting a character than the younger and more carefree Conan that was in most of this issue.

A fantastically drawn first issue, Conan the Barbarian #1 looks and feels like the prototypical Conan story.  It’s either a boilerplate introduction to the character or a comfortable reintroduction, depending on your level of familiarity with him.  Aaron, Asrar, and Wilson's comic is a great looking new version of the character that services an unambitious story that could have been written in 1978 as easily as it was in 2018.