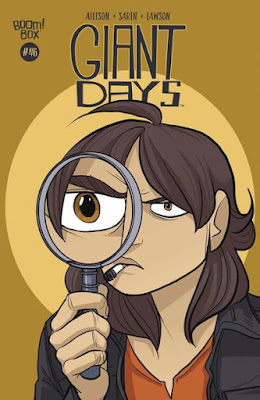 “Esther could be smart if she tried, but this wasn’t one of her trying months.”

Nefarious deeds plague the Danger Nebula. A shoplifter has started to frequent the crew’s beloved store. It’s a criminal mastermind that only  . . . wait Susan? . . . ok . . . we’re sure about that?
It’s a caper only a hard-edged private eye like Susan can solve. Still feels weird. 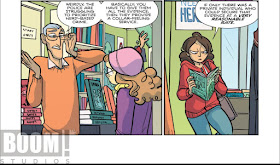 And solve it she does. Sorta. You’ll have to read to find out how, but if you do, you're in for a treat because this was an incredibly fun issue of Giant Days. The whole series carries the motifs of geek culture, but there is something special about the issues that focus on music or comics, and they always tap my nostalgia gene. The fun element of this issue is that it uses the comic shop and comic/geek references as typical plot points, not as part of a meta-fictive narrative. This isn’t a comic about a comic. It's a comic whose conflict originates in a comic store. I think that delineation is important. It’s almost too easy to let something degenerate into parody, but the Giant Days crew has always been adept at honoring their influences instead of letting them dominate. It's an exercise in restraint and editing. It would have been incredibly easy, and probably equally funny to chew comic references throughout the issue. But that's not what Giant Days is, and that's not why it remains so touching after a long run. 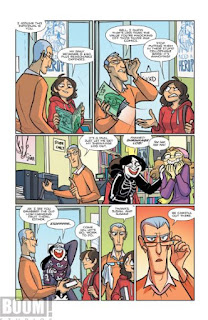 That isn’t to say that cultural references don’t abound, however. In a fun twist, the second half of the issue turns in a Sin City-esque black and white hard boiled noir in which Susan gloriously chews the scenery.

I’ve always felt that Giant Days is the type of series in which I can hear the characters’ voices in my head, something I can’t say about every comic. Part of that, shall we say, transcendence, is the ability for Allison and Sarin to capture the tone and pace of an animated series. There’s a zany realism to this story that is brought to life in a way that would only be possible in something like a comic book or an cartoon. Sure, you could film every part of this issue live action . . . but there’s something about the nature of sequential art that makes this issue, and the series as a whole, that much more intriguing.

The interplay between the characters after 46 issues and a few one shots and ogns is the ultimate payoff in the series. The jokes land easier, the exposition feels sharper, and the plot speeds along. There's nothing to force, no plot point to wedge between the progression of the narrative. It sounds simple, but not all books that make it this far - and frankly, few slice of life books push fifty issues on a monthly publishing schedule - are able to maintain this level of freshness without deviating from what made the series successful to start. It's relatable without being predictable, and even the common noir trope feels fresh with Allison's dialogue, all a result of forty five previous issues letting us know exactly who Susan is.

In the end, this issue was both fun and funny without sacrificing any bit of heart, especially as our culprit learns a valuable life lesson. The way it's able to reconcile teen angst, and the inherent creepiness of a young crush without lowering to cheap laughs or easy targets makes this issue as heartwarming as it is entertaining.

Also, there was a Death's Head II reference, so that's enough to put it in the buy pile on its own.