See all of the past entries of All-Ages or Small-Ages here.

There are a wide array of all-ages comics out there from the classic Archie comics, through the  Sonic the Hedgehog and Disney, all the way to the original properties such as Lumberjanes. You might look at one of these books and think that, as an adult, it doesn’t have much to offer you. As someone who has discovered a deep fondness for titles such as this, I’ve been surprised by how rich and complex the stories can be. All-Ages or Small-Ages? is a feature that takes a look at the books that fall under this banner and attempts to analyse whether or not their assigned label is apt; is it a book that you can read along with your children?

With all of the bleakness in the world at the moment, sometimes you need to sit down and read a story that’s so gosh-darned silly that it leaves you grinning beatifically and you get to feel that, just for that brief moment, everything’s going to be alright. After getting recommended this title by the wickedly talented Rob Jones, of Madius Comics fame, due in part to how hilarious it was, I went into this series entirely blind and the experience was all the richer.

Dungeon Fun follows the bizarrely, but appropriately, named Fun as she adventures through the dungeon that she’s spent the entirety of her life living in. Meeting countless fascinating and hilarious characters along the way, she emerges from the story learning things that she never thought that she could. A story of believing in your true self stored in a barrel of delightful self-referential ridiculousness, Bell and Slorance have created something really special here. Keep an eye out; these guys are going places. 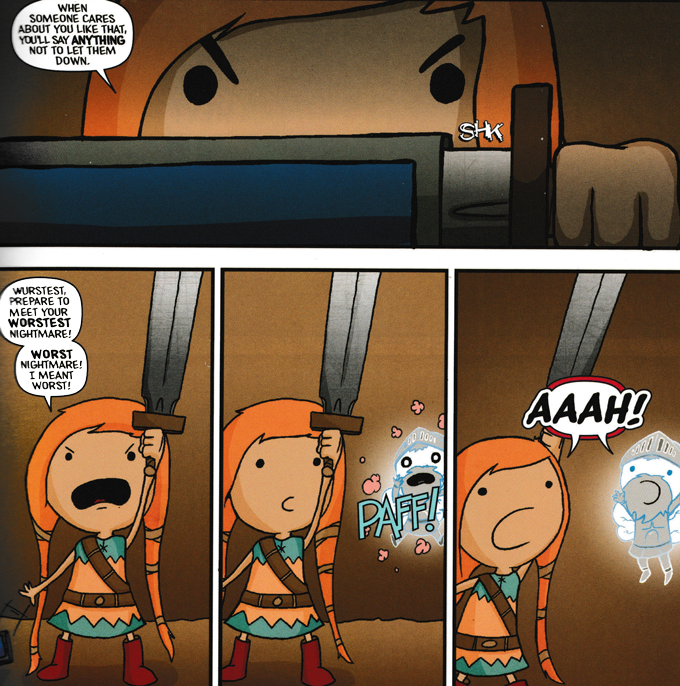 Although the first page sets this up as a stereotypical fantastical adventure, which I was expecting from the style of the artwork, the second page reveals it to be something different, yet so much more. With a very self-aware approach, Bell pokes fun at the tropes of the fantasy genre while also mixing in a little bit of modern day anachronism. We are made to feel for the troll guarding the bridge, after all this is only his day job, then shown the mighty knight walking through what is essentially an airport security check. Everything about this series is beautifully insane and you’ll be laughing from start to finish.

As all of the best media does, regardless of its intended audience, the reader is taken on a rollercoaster of emotions. The hilarious moments only serve to push the weight of the emotional ones higher. You read through each issue, enjoying all of the little jokes, until suddenly you’re forced to confront your feelings in a handful of surprisingly poignant scenes. Bell and Slorance subtly build up your empathy and compassion for these characters, only allowing you to realise what they’ve done when things start to come crashing down. 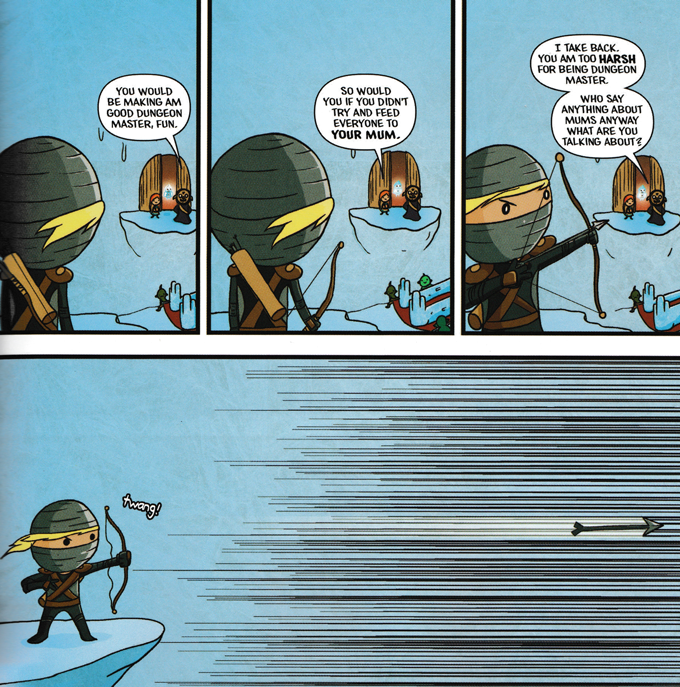 The cast of characters that we meet are broad and diverse, primarily thanks to series artist Slorance’s expressive world design. There’s an individuality to each of these characters that’s usually reserved for JRPGs and other ensemble fantasy stories. Again, this quality roots the series firmly within the genre that it simultaneously parodies, demonstrating how deep an affection the creators possess for it. You’ll meet humans, the aforementioned trolls and a whole array of monsters and you’ll fall in love with each and every one of them.

Slorance has a stylistic art that, upon first glance, might seem like it leans too far into childish territory, with his oversized skulls and large iris-free eyes, but it’s one that could not be more appropriate for this book. With the protagonist definitively pre-teen, she experiences the world through her own filter, seeing the best in everything and wanting to confront the world head-on for never allowing her to be herself. People that behave in an over-the-top way is not only tonally appropriate, but it allows you to forge deeper connections with the characters.

At its heart, as previously mentioned, this is the chronicle of someone striving to break out of the mould that her upbringing has put her in; whatever your age, that’s a trope that you can relate to in some form or another. However, instead of a story about putting your middle finger up to the predetermined nature of fate, there’s a more complex layer bubbling right below the surface. Fun is forced to forge a new path while also fully accepting everything that’s made her into who she is today. It’s a time-honoured, classic story that hits all the harder when being told from the perspective of a young child. 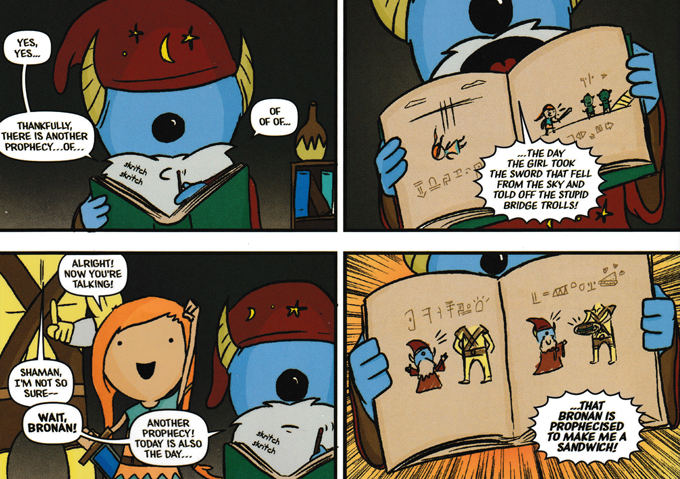 These creators know their audience and they know their genre. If this isn’t clear enough from the story, there are all of these little Easter Eggs that turned my affection for this series into head-over-heels love. Slorance includes little details like positioning the camera to make reference to Legend of Zelda video games that caused me to fist pump the air more than once. Not content to be left out, Bell brings in hampers full of D&D references, primarily through the character Frank, that are deliciously shrewd and will cause some genuine out loud laughs.

Although I went into this comic expecting a simple, yet endearing, story of a girl on a fantasy adventure, I left it immediately wanting more. Walking that tight-rope between homage and parody perfectly, this is definitively a series for people of all ages, shapes and sizes. If you’ve ever professed even a passing interest in the fantasy genre, or are simply someone who loves a good laugh, then this is the series for you. I cannot recommend it heartily enough and implore you to pop over and grab a copy before they all disappear. Now I just have to buy Rob a drink as a thanks.

Let me know if there's a comic that you think I should be checking out. I'm always on the look-out for some more hidden All-Ages gold. Contact me at mark@thegreengorcrow.com or head over to check out the podcast that I co-host You Know What I Like...? on SoundCloud.
Unknown at 8/09/2016 08:00:00 AM
Share
‹
›
Home
View web version