SPX Spotlight 2014: Eric Orchard and Maddy Kettle The Adventure of the Thimblewitch 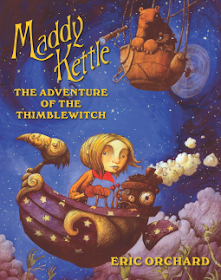 Welcome to another entry in the 2014 SPX Spotlight series!  For the next month, Panel Patter will be highlighting creators and publishers who will be at one of the best conventions, the Small Press Expo.  You can check out all of Panel Patter's spotlights for SPX from both this year and prior years here.

Maddy's got a problem: Her parents have been turned into Kangaroo Rats, probably at the hands of the evil Thimblewitch. Her only hope lies in confronting the witch, but it's a dangerous path even her folks don't want her to take.

But Maddy's made of sterner stuff, so she'll try anyway, aided by an unlikely pair of sky-soaring animals. It's a journey of discovery and determination in the first arc of what promises to be a longer story worth following from the beginning.

After getting a bit turned off the genre for a bit, I've been reading some really good all-ages books lately, and Maddy Kettle is another strong entry. When done right, all-ages comics can be the best comics. The key is not treating the young girl/boy as if they were a child. Give them the proper respect, agency, and active nature, and you have a story that will work for any reader. 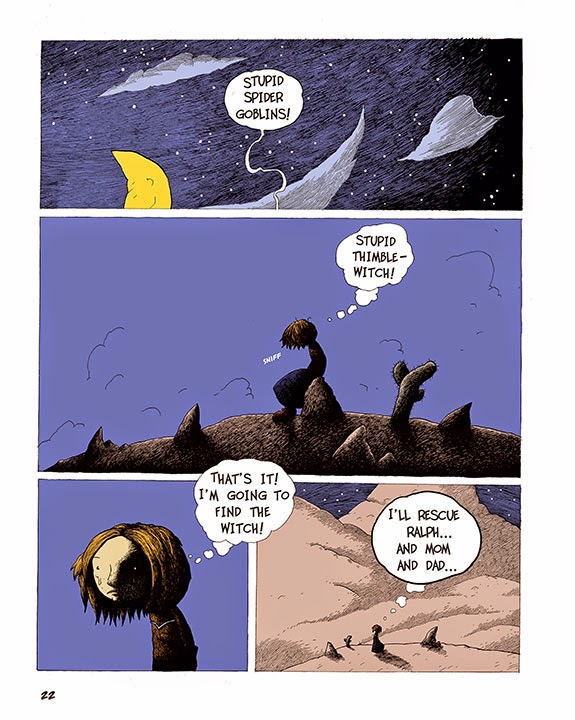 That's very much true of Maddy, who opens by stating she has a plan to restore her parents to their human forms and won't rest until she's reached her goal or dies trying. Because this isn't meant to be a tragedy, we don't expect Maddy to die. However the fact that she goes against her parents' advice and makes the attempt shows that she's not a puppet character. By the end of this part of the story, we see that Maddy is going to make her own choices, no matter what her parents will say.

It's the kind of thing a hero has to do--be brave when others are not, take risks at times most would stay safe, and go that extra step. Orchard gets that, and has her act accordingly. It's a nice character arc, and best of all, while the tale isn't over when this graphic novel finishes, we have a feeling of completion, not "Okay, that was part one," an issue other long-form comics can run into from book to book. 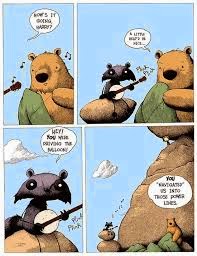 Of course, none of that matters if there isn't a lot of fun to enjoy along the way. Orchard provides that in both character concepts (I mean, Kangaroo Rats is really specific) and art that's extremely distinctive. You're likely to be familiar with goblins and bats and raccoons and bears mixing with humans, but I can just about guarantee these will be the oddest looking versions of those creatures, which combined with the backgrounds, really makes looking at Maddy Kettle quite unlike anything you've probably encountered.

If you ever see any of Orchard's other work, he has a distinctive line style that really catches your eye. It's almost like reading a story where ragdoll-like figures were used as the models. The heads are large, the arms and legs extremely thin. There's a sense of them being put together from spare parts, but it works well because the entire world has that construction. Thanks to extremely thin lines and cross-hatching that has to take forever to complete, Orchard's art has a look that's about as close to unique as you're going to find.

I really enjoyed Maddy Kettle and while it would best find a home with an age-appropriate person, there's a lot here that a person who just appreciates good storytelling will like. Things aren't as straightforward as Maddy wants them to be, and it's a lesson everyone needs to see. It's hard to believe this is Eric's first full-length story, and I can't wait to see where he takes Maddy and her companions next.
Rob McMonigal at 9/05/2014 05:56:00 PM
Share
‹
›
Home
View web version