Here comes the last list, my look at the superhero comics I read in 2013. In some years, this list is a bit thin, but I actually had a very hard time narrowing it down to 10, with 5 honorable mentions. It's the first year that my short list was nearly as long as the one for minis and non-capes stuff, and some fun books (Larfleeze) lost out because there was just too many good examinations of the genre to sneak it on there.

That said, my idea of a great superhero comic doesn't look much like the mainstream. So what I thought were the best books I read in 2013 won't match most, I suspect. However, I really dug each and every one one of these, right down to the honorable mentions and I love that comics is so huge that I can have all these great books and someone who only wants to read the latest Justice League spinoff can have theirs, too.

Comics is a really large tent these days, even if some parts of that tent won't let the rest play in them. To which I say, "I'm sorry you feel that way. Now if you'll excuse me, I'll be hanging out with those who do."

What's a favorite superhero comic for me? Find out below... 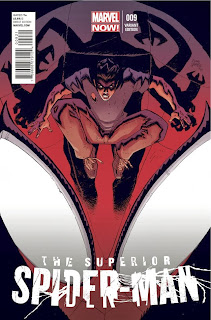 I am one of the people who comes down firmly on the side of "brilliant" when it comes to the questions of Ock-Spidey. While we all know Peter will be back someday, the idea that his greatest enemy, Doc Ock, was able to find a way to best him, physically and mentally, is a great concept. This would be even higher on my list, except that I often find the art sub-par (Humberto Ramos is one of my least-favorite artists) and a few too many issues suffer from either packing too much in or marking time for a big moment. Still, this was a favorite in 2013 and stands a good chance of being one again in 2014.

The only thing better than getting this comic every week from writer Jeff Parker and a variety of artists (primarily Jonathan Case) would be a legal re-issue of the television show itself (because that bootleg edition gets more and more tempting every time I see it). Parker's ability to tell all-ages stories of high quality was established with his Marvel Adventures work, and letting him play in the over-the-top Adam West sandbox is a gift that absolves DC of its sin of putting out a lot of really mediocre comics in 2013. From adding the Red Hood into Bats '66 continuity as only Parker could to having Colleen Coover guest for a Catwoman caper, this one has been note perfect. Its placement here is a huge testament to the quality of the superhero comics this past year. 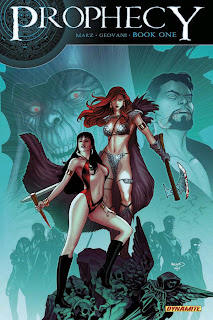 What happens when you mix Red Sonja, Vampirella, Dracula, H.P. Lovecraft, and Sherlock Holmes into one mini-series? A lot of great storytelling, especially when you  make the stakes so high that it spreads across time periods like a wave, threatening to destroy everything and everyone unless an unlikely group of anti-heroes can stop it. Ron Marz handled the large cast with care, making sure everyone got a piece of the action, right down to the surprise cameos and minor supporting characters. While I didn't care for his Holmes (too arrogant for my taste), everything else was pitch perfect, especially Walter Geovani's artwork. Juggling the action like he was born to handle a superhero team book, Geovani impressed me at every step of the way, avoiding the exploitative possibilities and drawing a story, not a pin-up book. He's a modern day John Romita, Sr. and you'll see me talk about him again shortly. 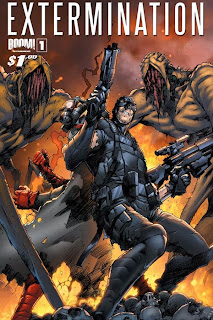 We've seen stories featuring Batman and Joker analogues before, but what if they had to work together to stay alive after an alien invasion destroyed nearly all of life on Earth? That's the premise of this series, which was another mini I enjoyed a ton in 2013, despite a few problems with the art as it moved along. Taking its characters in directions you never expect as you read, we soon learn that maybe our hero isn't as heroic as he first appeared, and as for the villain? Well, you'll just have to read to find out. I love the idea of putting familiar tropes and putting them into new concepts, as long as they don't feel cloned. After the initial superhero trappings, this one branches out to a logical conclusion for its protagonist, and was a big hit for me. 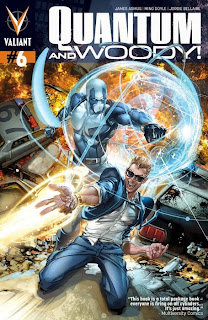 I never thought I'd see another Valiant book vie seriously with Archer and Armstrong for my monthly favorite, but Quantum & Woody came extremely close. I shouldn't be a bit surprised that this re-imagining of characters co-created by one of my favorite semi-retired writers, Christopher Priest, was every bit as good as its hype. James Asmus, working first with Tom Fowler and then the amazingly talented Ming Doyle, captures Priest's style, using title cards to great comedic effect. He's not afraid to push jokes in uncomfortable directions (Woody, who is White, disguises himself as his African American adopted brother at one point) and they fly fast and furious even as a real plot grounds the proceedings. Aided and abetted by the great visual physical comedy of Fowler and Doyle, this one blew me away and is now my leading candidate for best comic you might not be reading, now that Edison Rex is getting some well-deserved exposure from places like USA Today. 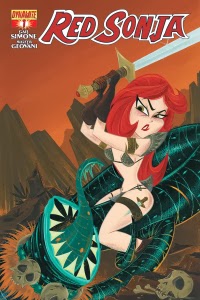 Gail Simone and Walter Geovani team up to soft reboot the Robert E. Howard heroine moved into Conan's time period decades ago by Rascally Roy Thomas. Never afraid to break her toys, in the first arc, Simone gives Sonja the plague and an origin that fits well with the character, even if it's extremely sad. The Simpsons Comics writer shows off her ability to mix jokes with the action, too, but not so many that it feels forced or out of place. Meanwhile, as with Prophecy, Geovani draws the hell out of the book, using a style that has strong roots in the Marvel tradition. Whether it's getting just the right look on a character's face or depicting the grittiness of battle, he's got the answer for anything Simone images. I hope these two have a nice long run on this series, so I can keep putting it on my favorites lists. 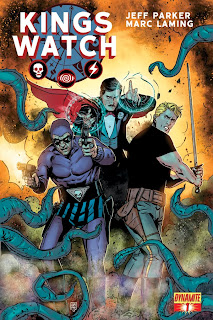 This is a year with a lot of repeat creators, and here's Jeff Parker showing up for the second time, working with three of Dynamite's Pulp characters as they take on an old Flash Gordon foe. As with Marz, he's able to give all members of the cast a role that feels both essential and fair in terms of screen time. His Phantom may be my favorite use of the character, making him a bit of a Batman-like figure whose humor comes from its intensity. While I love Parker's writing--who doesn't?--and his dialogue is top notch, the star of the show here is Marc Laming. Asked to combine science fiction with jungle adventure and a touch of magic, he switches between them as easily as I click Chrome tabs. His characters look amazing, the layouts draw the reader's eyes to just the right moments to emphasize the action, and he never fails to heighten the work Parker puts in, with little touches that punctuate a line of dialogue. Great work that shouldn't be missed. 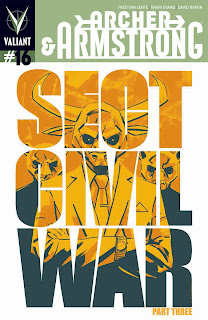 Sometimes books lose steam over time, but not Archer & Armstrong, which barrels its way through the Valiant Universe, flinging jokes and downing drinks that makes me wish Armstrong would team up with Volstagg in a one-shot. Writer Fred Van Lente, working with various artists who draw the characters to make them fit the jokes, keeps the humorous pace going despite threatening every few months to take things in a more serious direction. Whether it's aliens facing off against Amelia Earhart in the Bermuda Triangle or a handy graphic checking the blood alcohol level of Armstrong while Archer pretends to be Frank Castle, this one is all about living live on your terms, not those dictated to you. It's a message we could all stand to think about, delivered without preaching by one of comics' best writers. 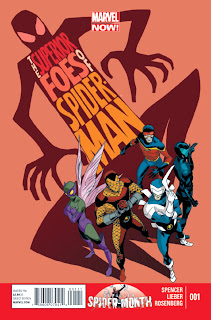 If you had told me that the best part of the Ock-Spidey saga would be watching a knock-off version of the Sinister Six get into hijinks together, I'd have laughed your right off Twitter. But here we are, a book that I admit I only picked up because I'll read anything Steve Lieber draws, finding its way to number two on my favorites list. With writer Nick Spencer knowing just how to exploit the quirks of these heroes whose most recognizable member is the Shocker (give that a minute to sink in, folks), Lieber is able to have fun, doing everything from showing the Chameleon-as-Hammerhead dropping a deuce in Boomerang's bathroom to Doctor Doom in Fantastic Four boxers. The pair of creators have amazing chemistry together that just keeps getting better with every issue as they scramble for a big score but can't because these are folks that Spider-Man hands off to Darkhawk because he's got better things to do. With Marvel letting them do just about anything they wish, Lieber pulling out every trick in his playbook (from Erika Moen Easter Eggs to cartoon thought bubble gags), and Spencer digging the characters into increasingly bigger holes, this one came out of nowhere to be Marvel's best book. Now if only it can keep up just enough readers to stay on the shelves! 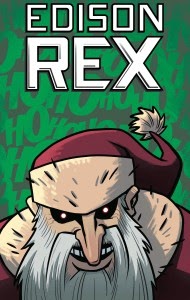 In a year with some amazing superhero books, this one stands just a bit above the rest because it is about as close to perfect as you're going to see in the genre. Chris Roberson and Dennis Culver didn't just set out to make an extended what if scenario for the Luthor-Superman dynamic. Issue by issue, back matter by back matter, they've crafted an entire world that echoes the DC Universe concept--going so far as to make an entire set of Golden Age heroes and their legacy characters--yet this never feels to me like an imitation. Thanks to making dynamic characters and not being afraid to do things that a Big 2 book cannot, Culver and Roberson make this their own. Rex-as-Luthor really does want to go good, not unlike Ock-Spidey, but his desire to fix it all and be liked is almost certainly going to be his downfall. Comics will be poorer for the loss when this finishes but for now, it's a clinic on how to make a unique superhero universe and use stories, not endless exposition, to create your world and characters. A final note on this one--as with King's Watch, a big reason this is my favorite superhero comic of 2013 is because of Culver. Watching him get better with every issue has been a real treat, as his big, blocky style belies an ability to use a ton of artistic subtlety to keep this epic story moving forward every month. Without a single reservation or hesitation, I'm happy to be part of an ever-growing chorus that's naming Edison Rex one of the best books of 2013.