This list is the second half of a personal cheat code. I read a lot of great non-superhero floppy comics in 2013, so many that I had a short list that was almost impossible to cull down to only 10. I put the horror ones in their own list, and these are the ones I thought were the best of the rest. My God, Comics--there's a ton of good stuff here. I had to make some hard decisions, which is definitely a good thing.

Now let's look at what I personally liked best from the world of non-horror, non-capes floppies in 2013:

A young woman trained to be an assassin is plagued by the ghosts of those she kills. Caught between warring factions who both want her dead, Amala fights to stay alive and make a place for herself in a hostile world full of steampunky creations, palace intrigue, and a touch of romance. A fun book that won me over by not going the typical route and making Amala a boy.

Like Edison Rex, this Monkeybrain launch title keeps going strong, with a consistent release schedule and a change in price and delivery. We learn more about the world Amelia finds herself in, as the writing team of Adam P. Knave and DJ Kirkbride start to work on the concepts they introduced in the first part of the series. More on this when it gets closer to the second printed volume from IDW in 2014. 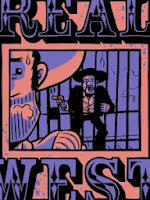 I'm a big fan of anthology series and I grew up on classic Westerns, so it's no surprise to find this one on the list. Each issue features a different take on the Western genre, starting with a traditional tale and moving into a more comedic piece for the second issue. The third was presented as a newspaper strip. Taking advantage of the freedom of digital, this one's highly recommended if you want to see how this premise can be done well (I'm looking at you, All-Star Eastern.)

Ryan North and company keep telling solid adventures of Finn and Jake, blending the nature of the show with North's peculiar--and funny--sense of humor. I do wish the storylines were a bit shorter, because the extended ones tend to stretch North's gag-writing skills to their limit, but it's been fun to see him really world-build, referencing past events in the comic in a way that the TV show might not do. The best reason to read this series, though, are the covers, which are outstanding, month in and month out.

Greg Rucka is at his best when he's working on his own creations, and this is no exception. In a world controlled by family factions, a woman who serves as one group's enforcer finds that things are far more complex than they appear. Packed with mystery and intrigue, Rucka takes his crime chops and applies them to a soft sci-fi concept. Meanwhile, Michael Lark's art sets the mood and builds the world, leaving Rucka free to tell his part of the story, rather than explain everything. Lark gets stuck with a lot of talking scenes, but gives them life and energy in this highly recommended comic.

Sam Henderson's periodic periodical released its 13th issue this year, and it was my first experience with the cartoonist, who is now a personal favorite. Able to take the New Yorker cartoon style and turn it on its ear by making incredibly funny "low brow" jokes while simultaneously skewering the urbane "wit" you'll find in literary magazines, Henderson varies from one-panel gags to extended stories. Not everyone can tell a dick joke that's actually funny, and Sam is one of them.

Duane Swierczynski got the unenviable task of writing new Dredd comics for IDW, and as with his Godzilla work for them, knocked it out of the park. Combining his strong crime writing skills with the over the top violence of the Dredd universe, his version of these characters feels very much at home with the British version, though I admit my experience with the latter is limited. Nelson Daniel does the artwork, making Dredd's world dreary and yet vivid, all at the same time. This is one you should definitely check out.

If you weren't all that keen on the new Star Trek movie (I wasn't), don't let that hold you back from trying out this four issue mini-series, which came out just before the movie did, and set up my expectations to a level that the movie couldn't match. A cocky Captain Kirk runs smack dab into a situation that can't be solved by bluster and bold moves, and reveals that the Federation in this version of the Trek Universe isn't as good as the one we saw on television. Mike Johnson worked with Roberto Orci on the story, and David Messini handles the art, which is capable but didn't bowl me over. Trek fans looking for better than what we got on the tarnished silver screen should give this a look.

It's hard to find new things to say about this one, so I'll just remind you that this is the story of a French female thief with an army of oddball assistants, a great sense of artistic taste, and flare for the dramatic. Aiding the police against normal crooks while robbing from those who deserve it, Bandette is all about having fun on the comics page. The husband and wife team of Paul Tobin (words) and Colleen Coover (art) enjoy their work, and it shows, especially in the line art, which is Coover's blend of digital work and inkwash, colored brightly to match the personality of the main character. There's a reason this won an Eisner, folks. 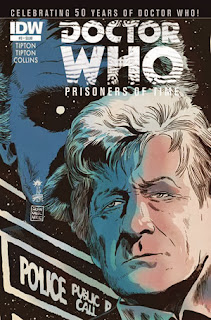 It's really hard to believe that only a few years ago, I'd have scoffed at the very idea of Doctor Who comics, let alone put one as my number one favorite. But Alex de Campi opened my eyes, and I've been a huge fan of this show--and IDW's adaptations of it--every since. Sadly IDW has lost the license to the series, but not before going out with a bang with this 50th anniversary maxi-series that features all 11 Doctors, their most recognizable companions, and a villain who's both obscure and perfect for the role given to him. Each Doctor fights a battle that typifies their run, ranging from a historical meeting for Doctor 1 to the arrogant lover who fights for Rose against Doctor 9. Scott and David Tipton take advantage of being able to use anyone, living or dead, and we get a nice blend of familiar and one-off creatures to bedevil the Doctor across time and space. IDW got a ton of different artists to work on it, topped by Francovilla covers that popped out at the reader.  This was ambitious, bold, daring, and clever--exactly what Doctor Who fans love best, making it my favorite non-cape, non-horror floppy series of 2013.