So yeah, this list is totally a cheat. I read a lot of great non-superhero floppy comics in 2013, so many that I had a short list that was almost impossible to cull down to only 10.

"What the hell"? I thought--I'll just put the horror comics in their own list! Problem solved! Anyone who reads Panel Patter regularly knows I'm a huge horror fan, so it's no surprise that I had many horror-themed comics on my short list. This is a separation I may only do once, but I thought it was needed for my 2013 work.

I'm curious to see the reaction to this. Horror is popular like it hasn't been in a long time, I think, and there are definitely books in this genre that I'm not reading. I fully expect to get some "What about..." comments on this one, assuming anyone cares what I think!

Now let's look at what I personally liked best from the world of horror floppies in 2013:

Frank J. Barbarie and Chris Mooneyhan turned this adventure series with some horror elements from a mini-series into an ongoing by strongly channeling Marvel's 1970s horror books without aping the act completely. A man has the power of literary ghosts--if he's worthy enough to use them. Very atmospheric, this surprise hit should carry on strong into 2014.

This one only comes out twice a year, but man, what we get in those issues is of an extremely high quality. The most recent issue (4) was particularly good. Written in the style of the Warren Magazine, each issue has several new stories combined with a reprint from the classic days. Anyone who loves horror comics should be reading this one.

Working with a variety of artists, co-writers Mike Moreci and Steve Seeley created this series about a group of paranormal explorers who cover up actual creature sightings by "outing" them as hoaxes. The cast is varied and complex, hiding secrets from the reader--and each other. The series works best when it's a combination of snark and scary, which I wish we'd see a bit more of, but I love the concept and the plotting is extremely strong, even if the art can be a little uneven.

This reprint series goes against the grain, picking lesser known horror comics from the 1950s, including post-code horror, that might otherwise not see modern eyes. Working with collectors, the editors pick from a wide variety of publishers, showing off what a reader of the time would have found at the newsstand. There are lots of hidden gems in this one, and classic horror fans would do well to see what this has to offer.

A loving tribute/parody to the old horror anthologies, with the host segments filled with satire from Calamity Jon Morris. That alone would have been enough to land it a place on this list, but the stories themselves, from a variety of indie creators (such as Benito Cereno and Chris Haley), held true to the format while feeling very modern. I really hope we get Boo! II in 2014.

Uncle Creepy gets his say more often than Cousin Eerie, so it's higher on my favorites list. Like Eerie, Dark Horse takes pains to make this feel like its Warren predecessor, but I'm not as keen on the reprints chosen for this one. They seem picked more for name value than quality. Still, the original work here--particularly in themed issues--is amazing, showing that short horror in comic form is alive and well.

James Stokoe's highly regarded Godzilla mini was a lot of fun. Like the main series it ran concurrently with (more on that one in a moment), this one understood that the key to a strong Godzilla story isn't just watching the monster and his fellow kaiju destroy things. The best Godzilla stories are when he stands in for something. In this case, he's the changing face of war for a soldier. Great work, available now as a collection. 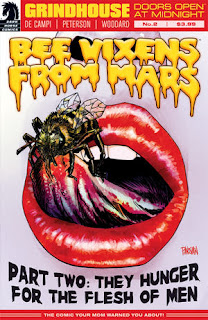 Alex de Campi shows her love of the drive-in B-movies of the 1970s in this series that's roughly halfway through at this point. A series of two-part stories, de Campi and her artists are able to take this style of storytelling and make it work, taking elements and using them well rather than in a sloppy pastiche. Ranging from killer alien bees to floating prisons in space, and with more to come, this one is a lot of over-the-top fun. 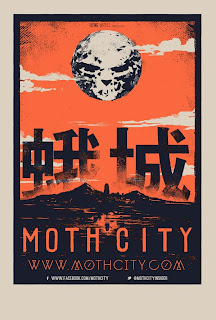 If you'd ask me about it, I'd have told you that it would be nearly impossible to get me to put a zombie comic on the top ten list, let alone at number two, but Tim Gibson managed just that. How? By making it a story first, zombie feature second. That's the missing ingredient in a lot of the same old same old we see far too much of in Artists' Alley. Moth City is run with an iron fist by a controlling bastard who has to stop the outbreak before the Japanese wipe everyone on the island--living or undead--off the map. Nearing its finish, this one really blew me away and gets my highest possible recommendation. 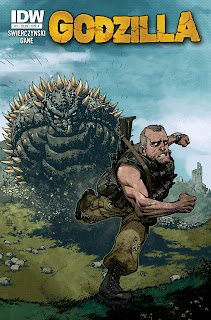 As I mentioned above, the key to a strong Godzilla story is finding a way for the monster to have meaning to the humans it interacts with. Duane Swierczynski understood this, and with the help of Simon Gane's gritty, well-researched linework and solid coloring from one of the industry's best, Ronda Pattison, told the story of one man's quest for revenge against a force of nature. Featuring everyone's favorite creatures and even giving a nod to the idea of Godzilla as anti-hero, this was my favorite horror comic, among great competition, in 2013.