Because of my continuing work with Newsarama and doing more here with established publishers and mini-comics creators, I actually read less comics that weren't serialized first than I have in the past. Part of this was due to the fact that I don't like my local library, and I expect once we're in Portland that I'll pick this back up a bit more. No matter how hard I try, I just can't get every type of comic balanced. (This is something I actually think of, and work on, from year to year.)

That said, what I read was incredibly good. I'm sorry I didn't get to some that I'd hoped to read before the end of the year, like the 215 Ink stuff I got at Baltimore Comic-Con, but man--comics just keep getting better.

Now let's look at what I personally liked best from the world of graphic novels/collections in 2013: 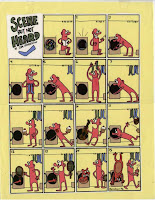 Sam Henderson is a new favorite of mine, and I'm shocked I hadn't encountered him before this year. In this collection, Henderson's work for Nickelodeon shines in its wordless glory, with lots of innovative panel breaking and visual gags that work for comics fans of any age. (Review here.) 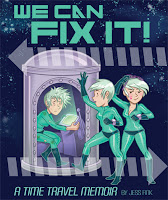 Another creator I came to appreciate in 2013, Fink creates an autobiography that uses the plot device of a time machine to interact with her past and uses it to teach her future self that sometimes things happen for a reason. Playful and sex-positive, this one shows not all autobio comics have to be depressing. (Review here.)


8:  A Matter of Life  by Jeffrey Brown (Top Shelf Comics)

A longtime favorite of Patter-ers Erica and I, Jeffrey returns to the style of comics that he was known for, before turning into a New York Times Bestseller for incredibly cute Star Wars books. This time, he's reflecting on his difficult relationship with religion, a subject very dear to my heart because his experience is quite similar to mine. With his craft never looking better and the responsibility of being a father handled with care, this is one of Brown's best. (Review here.) 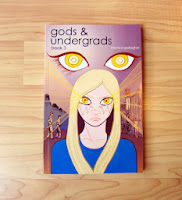 A relationship comic mixed with Greek mythology? It's like Monica's writing this one just for me. Like Brown, Gallagher's art continues to improve with every volume, and this one has a lot of little touches on the page that strongly support the increasingly complex plot. (Review here.)


6: Kill All Monsters by Michael May and Jason Copland (Alterna Comics) 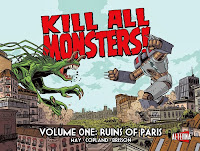 Like the entry just above it, this is a collection of a webcomic that basically hits all the right notes for me, in this case, giant monsters bashing the crap out of humanity. Far better than Pacific Rim, this kaiju-themed comic is a hit from the first set of stories, and I can't wait to see more. (Review here.)

It's really hard to do something different in a horror comic, but Tobin's concept really felt innovative to me, turning the nightmares of mental patients into a world of terror that can only be crossed by accessing their damaged brains. With Ferreyra's art going with the flow and bending the rules as needed to make incredibly details and disturbing visuals, this was one of my sleeper hits in 2013--and about as far from Tobin's Bandette as you can get! (Review here.)


4:  Monster on the Hill by Rob Harrell (Top Shelf Comics) 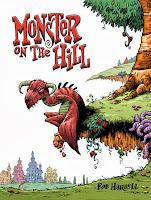 A true all-ages book, Monster on the Hill features a creature who can't be menacing enough for his town's tourism needs go on a quest (with the help of a few humans) to hone his craft. Unfortunately, in doing so, he's left his city free to any who seek to prey upon it. The idea of monster-as-kinda-sorta-hero was a nice touch, and Harrell's got a great sense of sarcastic wit that never goes over anyone's heads. Brilliantly colored and cleverly crafted, this makes me want more full-length work from the daily strip creator. (Review here.)


3:  A Boy and A Girl by Jamie S. Rich and Natalie Nourigat (Oni Press) 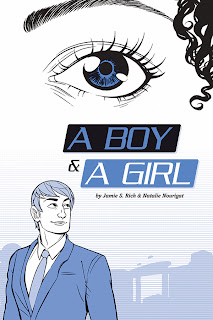 This book is exactly why I keep my favorites lists open until Christmas every year. Delayed from its original release date, this one won't get a lot of Best-of love, but it should. Rich blends the strengths of a relationship comic into the philosophical nature of what makes us human in a near future tale that delights as well as surprises, without a single gotcha moment. Meanwhile, Nourigat's art tells us so much about the world of the title characters, leaving Rich free to use his dialogue for other things. She changes styles as needed, using exaggeration in just the right places and showing a deep bench of creative influences. Oni Press might have reclaimed their Relationship Comics title belt with this one. (Review here.) 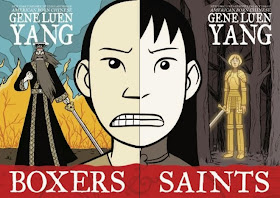 The National Book Award finalist was well-deserved, as this pair of historical fiction stories interact with each other by looking at two sides of the Boxer Rebellion. From the script to clever coloring to aptly comparing Joan of Arc to the Opera Ghosts of Chinese culture, Yang does everything right here. Instead of picking a side, Yanh leaves it up to the reader, allowing the complexity of the two sides to show, warts and all. This is one of the best historical comics I've ever read, and I rarely use the world best. (Review here.) 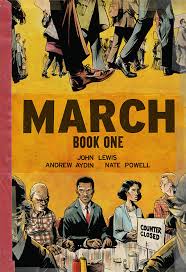 Top Shelf had an amazing 2013, topped by this major coup for the indie publisher. Civil Rights activist and sitting Congressman Lewis tells his story in flashbacks with the help of Powell's art setting just the right mood of fond nostalgia and terrible cruelty. Pulling no punches, Lewis tells us how it was, even as he continues his struggles for equality to this day, getting arrested for fighting for immigration reform. A comic once inspired Lewis, now he's returning the favor, in this graphic novel that is not only important but also very good, making it my favorite graphic novel of 2013. (Review here.)