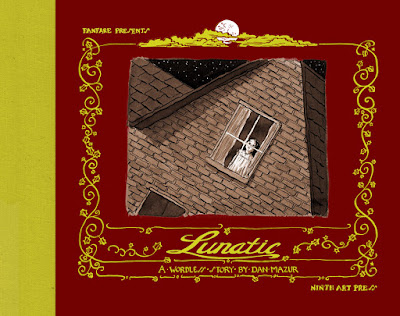 Lunatic is wonderfully enjoyable graphic novel that's unlike anything else I've ever read. The story is sweet and poignant and melancholy, and it evokes a magical, dreamlike quality. Lunatic is a beautiful, unique read that I'd recommend for readers of all ages.

Lunatic tells the story of a nameless protagonist, whose life we follow throughout the story of this wordless graphic novel (which is divided up into 9 chapters, each a vignette in the character's life). She's born into Victorian times (I'm guessing London), and from the time she is a baby, she has a close connection to the moon. She sees a face in the moon, and the face changes over time. Sometimes it's there to amuse her, sometimes it's there to judge her, and sometimes it's there to encourage her. As a child she seems to have spent countless hours up in her room, staring out at the moon. In her adolescence, she also felt the moon's presence closely. And once the attended university, she decided to make the study of the moon (and astronomy generally) her life's work. We see her in various stages of adulthood as the moon is never far from her mind or heart, including in a dramatic and surprising final few chapters (I don't want to say too much, you'll have to discover it for yourself).
To start, I refer back to creator Dan Mazur's description of the work itself. Mazur describes Lunatic as:

I was initially intimidated when I read this description (not being familiar with all of the people referenced), so I held off on reading the story for a little while. But I'm so glad I finally read it!  You don't need to feel intimidated; let me pass along what I learned (so that you can dive right in to the story).
I expect you're likely familiar with Jules Verne (20,000 Leagues Under The Sea, From the Earth to the Moon) and H.G. Wells (The Time Machine, The First Men in the Moon). They are (of course) legendary authors of classic 19th century adventure stories, and regarded by many as the progenitors of modern science fiction. You might (without even knowing it) also be familiar with the work of Georges Méliès - he was a French illusionist, actor, and director (a filmmaking pioneer), whose most famous work was the film Le Voyage Dans La Lune (A Trip to the Moon). Even if you don't know the name, you've probably seen the iconic image (shown below) of the moon (with a face, with a rocket having landed in the moon's eye).  Frans Masereel and Lynd Ward were both painters and very influential graphic novelists. Both were prolific in creating remarkable, gorgeous, wordless graphic novels in the early-to-mid 20th century. 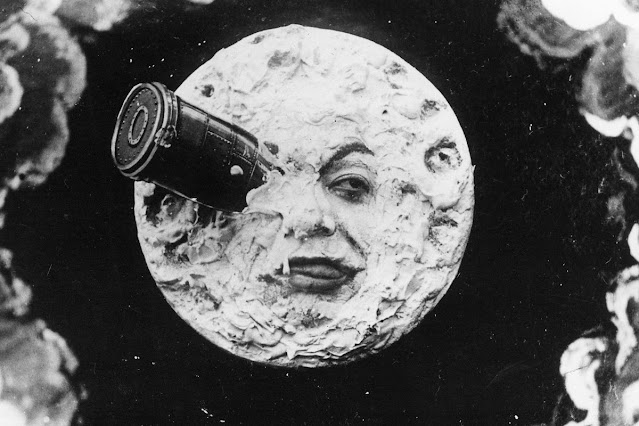 The title of the story struck me - when imagining the contents of a book called Lunatic, I wasn't expecting the protagonist we received. But I understand Mazur is using the term "Lunatic" in its original sense, meaning "of the moon" or "moonstruck".  Though there is some wordplay at work in this story, as "lunatic" is a term that some people might have used in the time this story takes place to describe the main character. She doesn't conform to societal norms in a number of ways, so I'm sure there would have been those who said she was herself a lunatic.
Lunatic differs from virtually all of the graphic novels I've read in two key respects.  First, as noted above, Lunatic is a wordless graphic novel. No dialogue or thought balloons to be found.  Secondly, each page of Lunatic is a single image. This is not the sequential storytelling I'm used to, with multiple panels per page. To be clear, this is a graphic novel, as it very clearly and ably tells a story from beginning to middle to end, but the sequential storytelling is on a page-by-page basis.  So, each page needs to accomplish a lot in a single image. 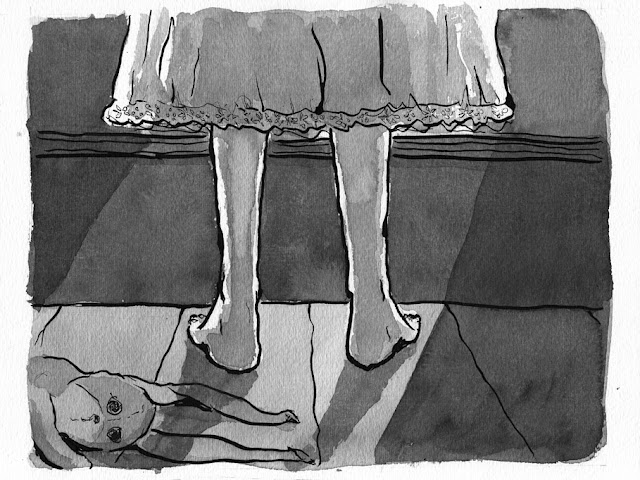 Thankfully, Mazur is more than up to the challenge he's taken on in Lunatic. The artwork in Lunatic is really wonderful; while it's done in a variety of media (paint, pencil, pen and ink), the art is warm and inviting and accessible. From the very beginning, Mazur does excellent work establishing a sense of place in the late 19th century. We understand that our protagonist is a person of privilege (as she's being taken for a walk in a baby carriage by a nanny or other caretaker), which affords her the opportunity to pursue a life of study and education. And in a few charming, delightful panels, Mazur establishes the character's love for the moon, and the way in which the moon reciprocates.
Each chapter in Lunatic presents a vignette from a particular point in time in the character's life. Even more than a traditional comic (with multiple sequential panels per page), the idea of a "snapshot" is prevalent. Some of the vignettes are a little longer (such as when she goes to university) and some are a little shorter (when she falls asleep at the window looking at the moon). But each, even in just a few pages/panels, clearly establishes the tone and mood of the story, and the state of mind of the main character. 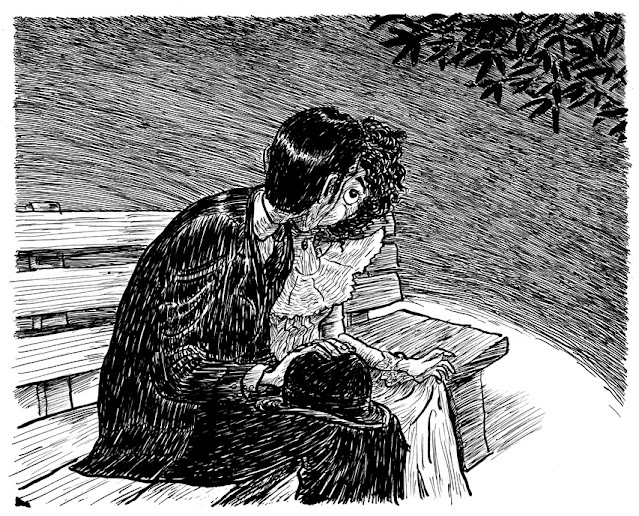 And those chapters are a real artistic tour de force from Mazur. As noted previously, Mazur uses different media (pencil, pen and ink, paint, inkwash) for each chapter (as seen in the various examples here). I love the variety of styles, and I found that each one of the different art styles suited the respective chapter very well. In the back of the book, Mazur details some of his process for each of the different styles, which I found fascinating. I appreciated that each chapter had a different style to it, as it felt like this book was a whole story, but was also 9 different stories about a person's life.
I thought there were a number of really interesting ideas at play in Lunatic.  What first struck me in reading this story is that the only meaningful relationship that our lead character has, in the entire story, is with the moon. We see her occasionally interacting with others in the most superficial ways, but the only real other "being" that interests her is the moon itself. Whether that's in regard to *interacting* with the moon, or studying the moon. There are caretakers, potential suitors, fellow students, colleagues, and others that move in and out of her life, but the only other party that interests her is the moon.
As the story began (and she was a baby or child) I found this charming. But by the time she is an adult, I found this deeply sad. I'm not sure if I'm meant to feel pity for the character, but I really do.  This story is in part a fable, so what is the lesson?  At least to me, I found it to be a fable about the dangers of fascination leading to obsession, and that obsession leading to a single-minded life of loneliness.  When the only thing you care about is over 200,000 miles away, you're going to miss all of the things, and people, that are a lot closer to you.  This is the inherent danger in anthropomorphizing a concept or an idea or a natural occurrence, and loving something that's never going to love you back.  I also think the story is pointing out that that level of single-mindedness isn't necessary. It's possible to achieve some level of balance in one's life; to both care deeply about an issue or an idea, and also make time for friends and family and genuine human connection. 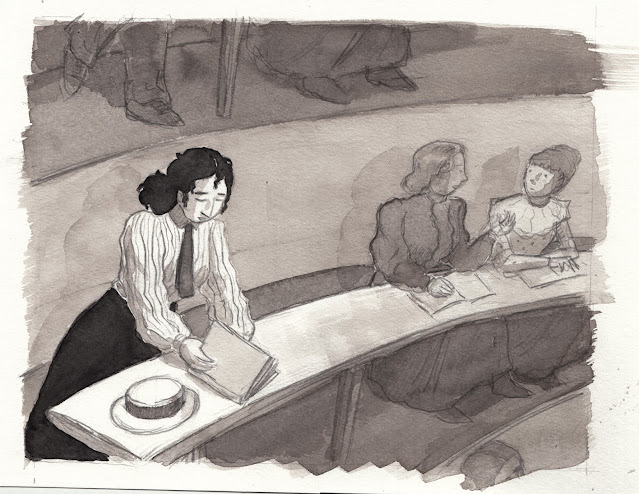 But I don't want you to think Lunatic is some sort of grim, Heart of Darkness-style tale of obsession and insanity.  It's not (and I also might have a tendency to see darkness and ennui wherever I look).  Far from it, this is a tale that's lovely and poetic. It has those elements of melancholy, but it's also suffused with a true sense of wonder. Mazur truly brings to life the Victorian-era setting, and this feels like a story taking place at the dawn of the modern era and an age of wonders.  Lunatic is a tale of adventure and determination, and yes, also a tale of melancholy.  But it's really a feast for the eyes, and I think you'll love looking at it and taking it in as much as I do. I highly recommend it.
James Kaplan at 1/27/2021 08:30:00 AM
Share
‹
›
Home
View web version