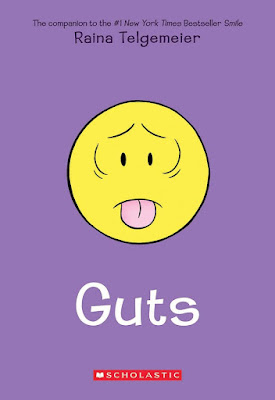 Raina Telgemeier’s latest book Guts returns to the semi-autobiographical form of Smile and Sisters, telling the tale of young Raina and fourth grade. During that year, just thinking about puking induced serious anxiety into Raina, practically making her sick enough to end up puking. This lead to a year of illness, doctors and therapy. From the iconic cover, with the usual smiley face looking worried and not too good, through to an often shivering, heaving Raina, Telgemeier traces a school year where Raina feels more and more alone and isolate because of her illness. Guts traces Raina’s growing health issues and how they exacerbate her normal 4th grade insecurities.

One of the big things that really helps drive Telgemeier’s storytelling is the simplicity of her artwork. Owing far more to Lynn Johnston’s For Better or For Worse comic strip than to any long form comic,Telgemeier has developed a rhythm that’s based around a mixture of representation of the physical and the emotional being of her characters. Her drawings capture an uncomplicated world that’s thrown into an everyday but still complicated chaos. Similar to a cartoonist like Johnston, Telgemeier’s characters act in a very broad style. They wear their hearts and their minds on their drawn sleeves. There’s not a lot of work for the audience to do here because she has her characters doing a lot of it for us. 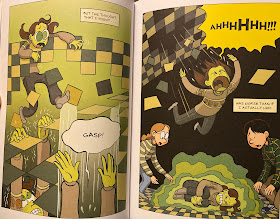 WIth so much of the story clearly expressed on the page, Telgemeier gets to find moments to play with the conventions of cartooning, creating some wonderfully surprising sequences. This playfulness creates some really fun moments in the ways that she tells the stories. One such moment in early in the book finds a vomiting Raina kneels in front of the toilet. The final panel of the page features her equally sick mother rushing into the toilet, covering her mouth and asking her daughter to move. It’s a familiar enough scene where you expect the first panel on the next page to be her mother taking Raina’s place at the toilet. Instead of a gory and uncomfortable vision, we see a gleeful Raina the next day describing the whole scene to her grossed-out friends. Telgemeier plays with our expectations here. Raina telling her friends about her mom puking basically describes the image that we were expecting but Telgemeier turns it into a moment of joy by jumping ahead and giving Raina some distance from her sickness. It’s also one of the early moments of her own maladies that she’s able to share and commiserate over with someone else.

Telgemeier also takes Raina’s experiences with sickness and uncertainty and visually frames them occasionally to make the moment larger than it is. Later in the book as she contemplates the possible connections between her illness and the onset of puberty, she draws Raina wide-eyed and staring into space. But she breaks the image of the girl into four panels, creating time and space in this moment of introspection. Lying in bed, in the grass, on a couch and in a bathtub, Telgemeier shows how Raina’s thoughts transcend a single moment to become something more than just a passing musing. 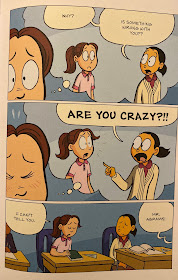 More than just focusing on her childhood illnesses themselves, Telgemeier uses her book to dive into what it means for a young girl to have a condition that keeps her apart from her friends and family. As much as Guts is about being physically ill, it spends most of its pages navigating how young Raina feels alienated from her classmates because she’s scared to reveal too much about her self for fear of being really shunned by the other children.

Through this book (like she does in many of her other books,) Telgemeier is telling us that it’s ok to be “different.” Or at least to think we’re different as Raina learns that she’s not the only one who is trying to hide secrets. She’s not as alone as she thought she was, a nice callback to the night her and her mother were both hunched over the toilet. Guts encourages us not to listen to that nagging voice that exists in the back of most of our minds telling us that there’s something wrong with us and that we’re not good enough. Whether you’re 10 or 50 years old, it’s hard to ignore that voice and even harder not to believe it. In this book, Raina moves through this school-age world where she feels like she’s the only one who doesn’t fit it. It’s lonely and scary until she realizes all of her friends feel that same way for their own reasons. Like the best autobiographical storytellers, Telgemeier is able to take personal events and trauma and turn them into universal stories that we all can relate to.
Scott Cederlund at 10/25/2019 07:00:00 AM
Share
‹
›
Home
View web version