For the third year since it's relocation out of Williamsburg, Comics Art Brooklyn (CAB) will take place at Pratt Institute in the Clinton Hill neighborhood of Brooklyn NY. This year it is scheduled for Saturday, November 2 and the big draws are Gary Panter, who among other things is famous for the paper mobile hanging from the ceiling in Harvard Square's Million Year Picnic; Aline Kominsky-Crumb, renowned underground cartoonist and erstwhile editor of Weirdo magazine; and Chris Ware, fresh off the publication of Rusty Brown.

This will be the first chance many get to flip through Gary Panter's new book, Wildest Dream, published by the organizer of the festival, Gabe Fowler of Desert Island. I can't wait to get a look at it myself, but the focus of my attention is on comics that I would otherwise not be able to see at all without paying massive shipping fees or living closer to one of the five or six best comic stores in the continent such as Copacetic, The Beguiling, Quimby's, Floating World, or Desert Island.

In previous years the big draws for me at CAB were Breakdown Press from the UK and Hollow Press from Italy. Both of these publishers now have distribution in the U.S., so while CAB may give you an advance shot at their new books, opportunities to save big on international shipping are diminished.

Breakdown Press has fewer new books this year than in some years past, but one book of note is The Pits of Hell by Ebisu Yoshikazu, with translation and essay provided by the inestimable Ryan Holmberg. Ebisu Yoshikazu apparently worked as a janitor in the 1960's while publishing short comics in Garo magazine, the Japanese monthly known for it's counter-culture and offbeat manga. The preview images Ryan Holmberg has shared on his Instagram look angry, vicious, and fed up with the daily frustrations of blue collar work.

Hollow Press might have the second most anxiety inducing website in all of comics after Comics Workbook, but they consistently put out killer books. They should have Tetsunori Tawaraya's latest book, Assassin Child at CAB. The book is silver ink on black paper and depicts a crash landing scenario of asexually reproducing aliens on a distant planet. It promises imaginative and highly detailed depictions of monstrous figures navigating bizarre alien landscapes and if it's anything like his previous books is well suited for fans of Matt Brinkman, whom Hollow Press has also republished. Tetsunori Tawaraya himself is also tabling at the show where I would expect him to be selling screen printed pink and neon shirts from a large disorganized pile. 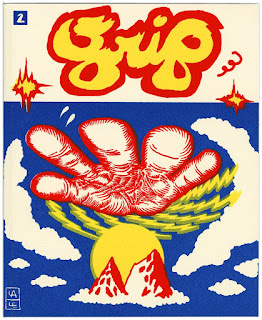 Lale Westvind will be at this year's festival with the sequel to 2018's Grip aptly titled Grip 2. This book was published by Acceptable Press at the end of September and continues in a similar vein as it's predecessor with a strong woman working wonders with her hands. One sequence in particular brings to mind the popular YouTube channel where a guy is shown building elaborate structures, such as underground pools, with his bare hands. She'll also have a new book from Berlin publisher, Colorama, called Code 3:5; Burnout, a new Grip riso print, a new screen print, and some small gauche paintings. Everything she does is worth checking out.

Unlike Breakdown or Hollow Press, the aforementioned Colorama Press' presence at the fest may in fact present opportunities for savings on international shipping as distribution for their books in the US is limited. Besides the new Wesvind comic they will have the latest by Olivier Schrauwen, titled Sunday 2 as well as a reprint of his previously self published Sunday 1, which recounted the mundane daily activities of a man, allegedly Shrauwen's cousin, while his girlfriend was out of town. Schrauwen is a Belgian cartoonist and was a special guest at last year's CAB coinciding with the publication of a major collection of his 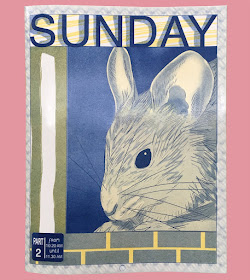 short works by Fantagraphics Books. Schrauwen is the funniest working cartoonist today but no one would would classify his comics as humor. They are beautiful, formally inventive, and manage to have depth of character and story while walking on the edge of absurdity. A new Schrauwen comic is a drop-everything-and-get-it-now scenario. These comics will likely be collected at some point in the future, it's up to you to decide if you are the type of person who can wait for that or if you would prefer them now.

Mega Press is a publisher operated by cartoonist Panayiotis Terzis. I'm mostly aware of them from their Trapper Keeper anthology series which has frequent contributions from artists Lala Albert and Leon Sadler and depicts grim though colorful risographed visions of the future. In collaboration with Neoglphyic Media they will have a new 100 page anthology at CAB called An Unknown Power, with an impressive array of contributors including Lando, Margot Ferrick, and Robert Beatty cover art, but the contributor who caught my eye was Lilli Carre. Carre has been largely absent from comics for the last six or seven years and maybe her contribution here means we will see more from her in the future. In fact she also had a new stand-alone comic just last month, mini kuš! #80, from the Estonian publisher, kuš!, who will also be at CAB. 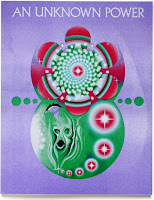 Paradise Systems is a New York based publisher that brings comics to the US from China with a focus on “weird, sincere, [and] experimental storytelling." Earlier this year they kickstarted their most ambitious project to date, the translation and publishing of a 100 full color page anthology titled Naked Body that was originally published in China in 2014. It's the first the first major anthology of independent Chinese comics published in the US. As I understand it, independent publishing is technically illegal in China and yet a thriving independent comics scene exists of which I am entirely ignorant and would love to learn more.

There are over 300 exhibitors at CAB this year, so I can't hope to mention them all or make a blanket statement that encompasses the types of comics you will find there. One last exhibitor I want to mention though is Bubbles Fanzine. Bubbles is edited and self-published by Brian Baynes, a Richmond native and the co-creator of the Richmond Zine Fest. Issue #4 of Bubbles was released earlier this fall and I'm looking forward to picking it up at the fest. If your budget doesn't allow for beautiful $50 risographed anthologies there will probably be plenty of mini-comics scattered throughout the fest, but Bubbles issues at $6 each are arguably the greatest value you will be able to find in the room.