In recent years, I’ve come to appreciate the value of an anthology series; consecutive but relatively disconnected short stories force diversity and creativity to the surface. Glorious Wrestling Alliance #1 begins in this vein, which is when it’s at its strongest, but it unfortunately starts to lose focus towards the end. It’s clear that Hicks is a talented creator, so don’t disregard this series yet, but he simply needs more time to develop into the person that you can tell that he’s capable of being.

The story of Glorious Wrestling Alliance is contained within the headquarters (i.e. stage and office space) of the eponymously named company, with its peculiar staff out in full force. Introducing us to the appropriately named carp-headed wrestler Great Carp on the first page shrewdly pushes this book firmly into fantasy from the beginning. It removes the need for a concrete explanation for all of the weird happenings and lets you enjoy the silliness of the characters and the lack of logic for what it inherently is. 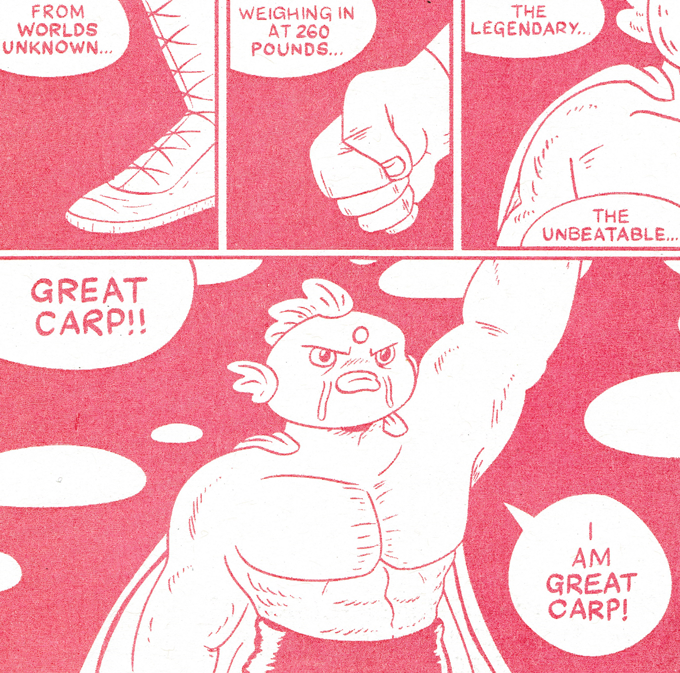 We are then gradually introduced to the rest of the cast, ranging from an overly buff man interested in writing flowery poetry to someone who is literally a giant pot of gravy. Each individual story is contained within two opposing pages, keeping them unquestionably distinct in your mind. This is, in my opinion, where this book is at its best. You don’t feel the need to connect all of these disparate threads into one; you can simply enjoy each of them for what they are.

After introducing all of the players, Hicks then suddenly takes us back to the story of the initially introduced Great Carp, creating a little bit of narrative whiplash. If the story were meant as an ongoing story, then we should have been able to see connections between all of the individual stories as we went through them, forming an instinctual connection in our mind that these stories are eventually going to combine together. At its core, my problem with this issue revolves around the fact that it hasn’t quite decided what it wants to be and subsequently, unfortunately, flounders somewhere in the middle.

Hicks clearly has a knack for world building, with a sense of humour to match. The majority of the stories that we see play off the incredulity of the situation to create moments that are genuinely amusing. The melodrama and the pressure that surrounds performing on stage creates a great dichotomy with the strangeness of a world where a man can exist with a gravy boat as a body. This is an issue that doesn’t take itself too seriously and it isn’t afraid to let you know it; there’s something to be said about a story that is unabashedly unique. 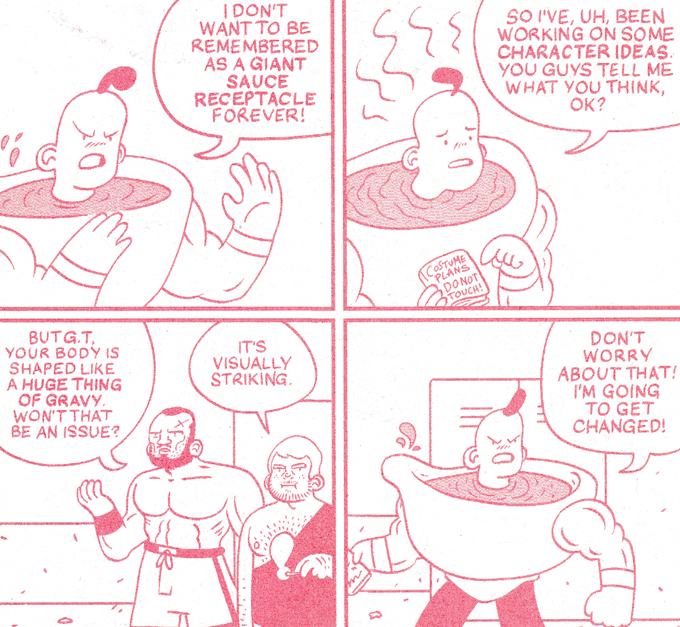 With a very cartoonish art style, there’s no lack of emotion to be found within the pages of this book. Characters have exaggerated body language and are over-invested in their stories in a way that serves to heighten the weight of the story itself. There are times when the sequence of a large spread has not been fully thought through and you start to lose track of where you’re meant to be looking next, but overall it’s a very strong effort. Everything is over-the-top in a way that matches the tone of the narrative that it’s portraying.

I’m not a fan of wrestling in any form. I’m not anthetical to the theatrics of it, but it doesn’t have enough appeal to pull me in. Theatrics are something that this issue definitively has in spades; all of the dials have been turned up to 11 and everything is plowing forwards regardless of anything else around it. Even with the problems that I have with this issue, I did find myself enjoying a large proportion of it. It’s entertaining in a way that does make me want more; I just hope that Hicks can reign himself in and think about exactly what kind of creator that he wants to be.